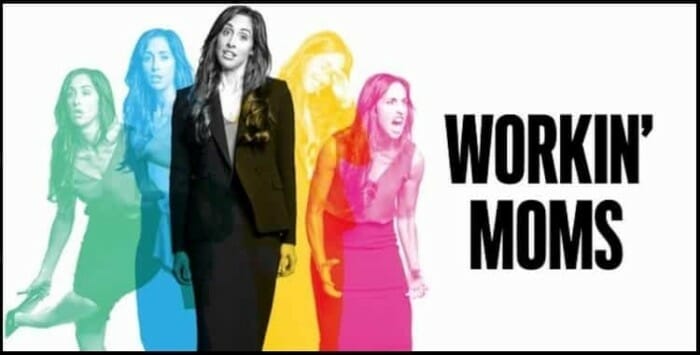 Resilient, determined, raw, and authentic. These are only a few words to describe Catherine Reitman, the American-Canadian actress who is best known as the showrunner for the dramedy, Workin’ Moms.

As the daughter of film director, Ivan Reitman, Catherine is no stranger to Hollywood. Her acting appearances include popular TV shows like Black-ish and It’s Always Sunny in Philadelphia. She also appears in movies such as Knocked Up and Friends with Benefits.

After these brief onscreen stints, Reitman became what she describes as an out-of-work actress. So instead of turning to Hollywood for more roles, she decided to tell her own stories. The result: a successful TV show featuring the commiseration of motherhood. The female dominant cast and production show would go on to catch the attention of streaming giant, Netflix. Reitman, along with her husband and actor, Philip Sternberg, both star in her show.

Workin’ Moms is Reitman’s show that doubles as a narrative about their own life as a mom. Filmed in Toronto, Ontario, the show follows the lives of three career-driven moms as they navigate relationships, families, high-flying careers, and postpartum depression. The show’s story is authentic, as it paints the nuanced realities of women who juggle babies and career.

FX originally bought the show concept.[1] However, after developing some of the shows, the network decided not to air them. This did not deter Reitman. Instead, Reitman continued to shop the show around until Canada’s largest broadcaster, CBC, picked up the show. Three seasons in, Netflix picked up the show and has since been renewed for two more seasons.[2] In the golden age of television, the show is one of a few with a female dominant cast and production, something which Reitman is always cognizant of ensuring.

Hollywood, like many other businesses, builds its success on delivering stories that are popular with the audience. In an interview with Forbes, Reitman opens up about the difficulties and pressures felt with telling a story about motherhood from the perspective of a female. Borrowing from popular TV show, Breaking Bad, Reitman compares her character to that of Walter White. Audiences celebrate flawed characters like Walter while characters like Kate Foster are often held to a different standard. Audiences criticize the character because she does not fit the stereotypical mother figure that other shows portray. As a result, this expectation pressures writers and producers to create characters that cater to audience expectations. Thus, further perpetuating the model mother or women in film.

Additionally, other popular TV shows featuring a working mom focus more on their success than the struggles. Vox’s article on the show highlights how working moms in other shows, like Meredith Grey of Grey’s Anatomy, celebrate women but only as they adopt is one of the boys to climb to their success. These shows blatantly ignore all the research and literature that highlights the challenges and burden women take on by having it all. This gap in representation gives way for writers like Reitman to really showcase their narrative.

Because according to Statista, women still watch on average 2.61 hours of TV per day, only half an hour less than men. This equates to over 950 hours per year of content, little of which is truly representative of the more controversial and provocative narratives surrounding a female protagonist. Moreover, Netflix’s user base is reportedly dominated by female viewers at a 51:49 ratio. Thus, more reason for the streaming giant to sign on to content that appeals to their audience.

Women in the film industry

Reitman has no hesitations with having an all-women writers room for the show. Approximately 69% of the cast and crew are women.[3] What proved to be the greatest challenge was having an all women production team. In attempting to fill all production roles with women, it became evident that there is an experience gap in the industry. Despite this, Reitman has hired women with less experience and has touted that taking this risk has always paid off.

This presents an important point in how to break the cycle that perpetuates gender gaps. By taking a chance on a less experienced woman, Reitman is effectively levelling up the playing field for the candidate. This helps build out the candidate’s portfolio by arming her with valuable experience in an award-winning TV show. If more leaders take these risks, it will open more doors for diversity and inclusion at all rungs of an organization.

Additionally, Reitman praises the dynamics of a set that is predominately women. In comparison to her other production experiences, she describes the set as efficient, warm, and understanding. This speaks to great amounts of the importance of diversity in teams in all organizations.