What is the Peter Principle? Theory and Examples 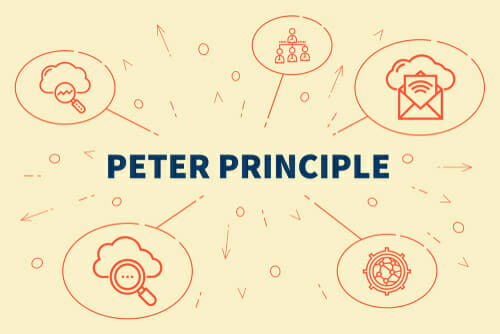 What is The Peter Principle?

There are people who after being promoted become unhappy. The reason may be because they are struggling and are unable to cope with the new demands of the job. This situation is what the Peter Principle theory explains.

The Peter principle is a common occurrence in organisations with hierarchical structures.

According to the principle, when an employee works in a hierarchical company, they will use their position and status to move to a higher level. If this form of promotion continues, that individual will eventually be promoted to a level where they are no longer capable. The new position will require new or different talents than their previous role needed, and they will be unable to advance farther in the organization.

This happens because employees are promoted based on their performance on the current job rather than the skills and aptitude or competencies required for the higher role.

While they ascend to the next level, gaps in knowledge become increasingly obvious. An employee who was once very competent at his job may now be considered incompetent.

As a preventive solution, individuals or employees should keep the Peter principle in mind when they get a promotion.

Likewise, managers should keep in mind the fact that knowledge and abilities decline when hiring or promoting an employee into a new role.

How The Theory Came About

The theory was developed by a Canadian Educator by the name of Dr. Laurence J. Peter in a book co-authored with Raymond Hull titled “The Peter Principle”.

Dr. Peter’s well-researched analysis pinpointed a major fault incorporate systems in a humorous tone. Despite the humorous tone of the book, the theory it postulated was interpreted to be true.

Examples of The Peter Principle At Work

Example 1: The Employee That Is Aware of His Capabilities

John has worked in a tech firm for five years. His manager had a meeting with him commending him for a job well done and letting him know his promotion is due.

John further inquiries about the skills that will be needed for the job. His manager gives him the brief. John is familiar with the Peter principle. And admits that he wouldn’t be able to perform the majority of the job responsibilities. He requests that he should be sent for training or enrolled in the organisation’s mentoring program. His manager had thought John wouldn’t need any further training as he had consistently surpassed his deliverables for the past five years.

“Every promotion entails new tasks, responsibilities, and perspectives. It’s not fair to assume that someone will automatically conjure the needed skills when they didn’t practice them in a previous role” writes F. John Reh an experienced business manager.

Example 2:  The Boss Who Refuses To Recognize His Incompetence

A new boss resumes as a department head in a tertiary institution. Firstly, he was unfamiliar with the workings of the new department. To add to that, he was arrogant. He refuses to hear the opinion and feedback of employees in his department. Consequently, nobody ever informs him of his blind spots and errors. Six months into the job, the department’s productivity hit an all-time low. Many complaints were filed against him. And he was hurriedly transferred.

Had this boss been aware of the Peter principle, he would have been open to learning. And recognized that yesterday’s insights and methods could be irrelevant in today’s fast-changing business environment.

How To Prevent The Peter Principle From Occurring.

For those in management or leadership positions, assess the employee’s abilities and competencies in relation to the job requirements and duties. This is done to make sure they’re qualified for the new position. In addition, you should also investigate whether there are other roles with promotion chances in which the employees in consideration are more suited for or more likely to grow and thrive.

According to research, most employees are more pleased about the additional income that comes with being promoted than the promotion itself, or the power or higher-level status that comes with it. One method to avoid the Peter principle is to enhance the remuneration of employees who are working exceptionally well in their current roles. As a result, employees can earn more money while staying in their current position rather than shifting to a position where they will become incompetent.

It’s easier for lower-level employees to transition into new roles when they receive mentorship and training. So, if you observe that employees are struggling in any role or are no longer performing as expected, consider it time for the employee to receive mentorship from higher-level managers. Pairing employees with mentors in the organisation can help them fill knowledge gaps that are required for exceptional performance. Designing training programs that equip employees with the requisite skills for a job will also help employees succeed at their jobs.

Choose Employees Who Are Aware Of Their Full Capabilities

For managers and leaders, it is preferable to hire personnel who are well aware of their own potential and abilities to avoid the Peter principle.

Individuals or employees should assess their talents in light of the increased duties that come with the new role. Even though the idea of a promotion appeals to an employee, he should decline the offer if he does not believe he is capable of handling the additional duties.