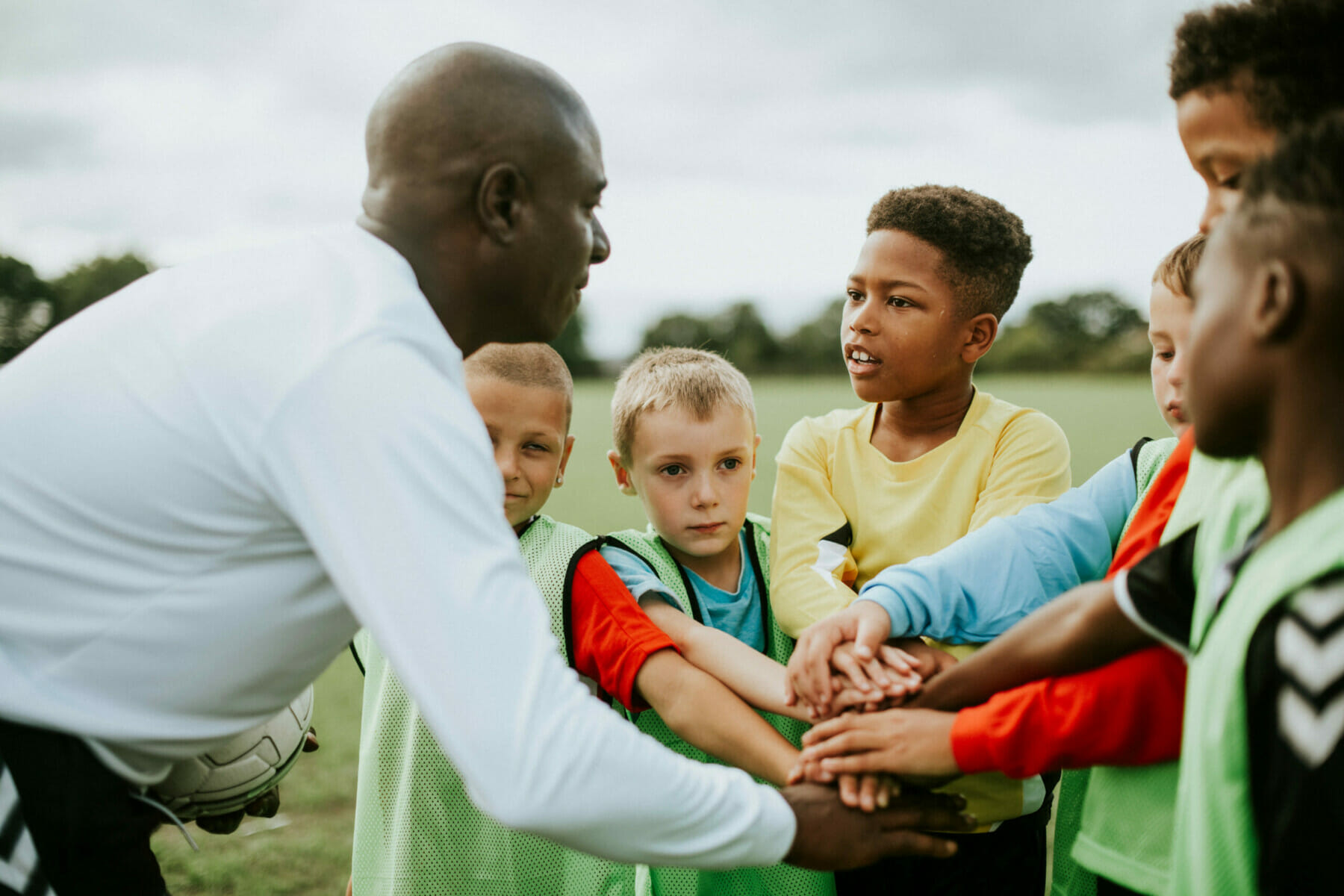 The first step in performance management is to objectively assess where your team is at today.  To do that, I’m going to teach you to use a tool called the “Star Chart.”

The Star Chart is a tool that brings objectivity and clarity to the people issues that currently feel subjective and cloudy.

The Star Chart measures a person’s effectiveness in their current role. It does not measure whether they’re good or bad human beings. You’re not judging them as people—you just want to assess how well they fit into your company and how effective they are at their job.

How the Star Chart Works

Thinking about a person’s performance in their current role, you’re now going to assess each person on the Star Chart in two simple categories: attitude and effectiveness.

The vertical (attitude) axis covers all of the “soft,” more subjective aspects of your employee’s contribution at work—what they’re like to live with.

The horizontal (effectiveness) axis assesses the more objective question of how much actual work they get done. 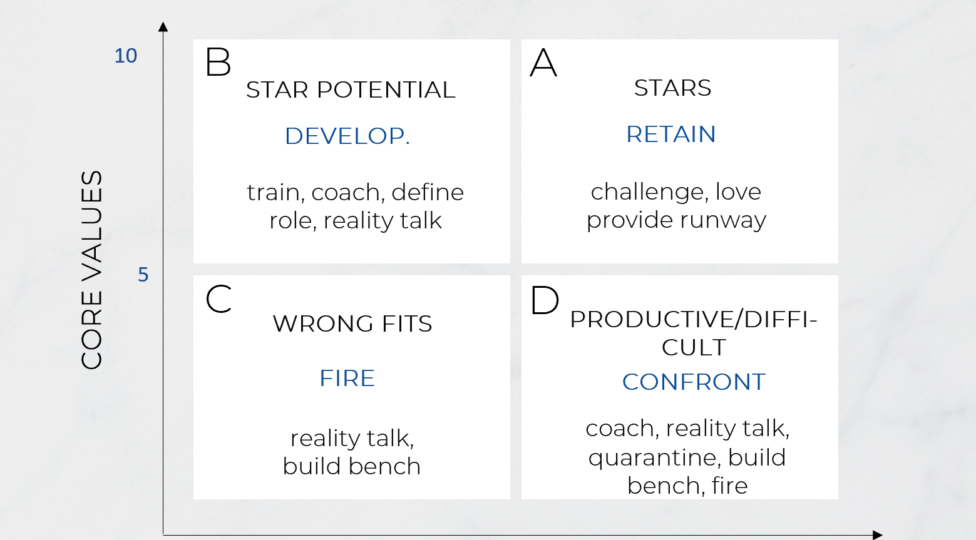 To begin the performance management process, we’re now going to put the attitudes we discovered in the earlier chapter to practical use, as a measuring stick for each employee’s behaviour. You will estimate how much of the time they spend living out those attitudes that are core to your company’s culture.

You’ll plot each of your key employees, one at a time on the chart.

Team effectiveness is all about consistency

What about employees who sometimes have wonderful attitudes, but sometimes don’t? Maybe the person you’re grading typically has an exemplary outlook (embracing the right attitudes, ninety to ninety-five percent) from Monday afternoon to Wednesday; a moderately acceptable outlook on Thursday (say, seventy-five percent); and is often a nightmare (in the thirty to forty-five percent range) from Friday to Monday noon. But Tuesday and Wednesday, wow, are they great!

To put it in a different context, how would you feel if that person was your goalie? Would this track record make them a Star then? Probably not. Consistency matters. Consider overall behaviour when you’re engaging in performance management.

Once you’ve estimated an attitudes score, plot it on the vertical axis.

The horizontal axis measures a person’s effectiveness in his current role. Estimate how much of their time in a given day or week is spent being productive in the role that they are currently being asked to fill.

Again, estimate a number from one to ten, and choose where they fit on the horizontal ‘effectiveness’ axis. Remember: you’re not measuring their value as a person, you’re only measuring their effectiveness in the job he’s doing right now. You are focusing on job performance management only.

Locating the Coordinates in the Proper Quadrant

Now that you’ve thought through your scores, bring the results from the vertical and horizontal axis together, and see which box your employee is currently living in.

Now let’s label the quadrants. Starting from the upper right and moving counter-clockwise: Box A contains your Stars; Box B, your Potential Stars; Box C, your Wrong Fits; and Box D, your Productive but . Chapters eight to eleven provide detailed strategies for how to build an HR plan for each of these four groups of people. For now, your goal should simply be classification.

At times, you may be tempted to score a person at a five (or precisely on the line dividing one box from its neighbor). If you do so, follow the rule that says that anyone who scores exactly five automatically gets bumped down to a four (and therefore goes into the “lower” box or lesser category). In other words, someone on the horizontal axis between a Star and Potential Star becomes the latter if they score a five. The idea here is to have clarity, and choosing five is usually a way of copping out so that no one needs to take any action.  That’s not effective performance management.

Repeat this process for each one of your team members until you have them all clearly plotted on the star chart.

How Are People Likely to Respond to performance management?

Who loves tryouts for sports teams? The ones who’ve worked the hardest and know they’re going to be among the best. Who hates them? The ones who think they might be cut.

Who loves (or hates) going to the track meet or the spelling bee or applying for scholarships and university entrance or asking out the best girl in the class? This isn’t a new or shocking idea. We live with performance expectations all our lives, and then abandon them when we enter our careers; the contribution that we make that matters most.

Your Stars will love this process. Finally they’ll be recognized for their superior contribution, and will begin to see their workplace become happy and productive.

Your Potential Stars may be intimidated at first, but since their hearts are in the right place, they really do want the company and themselves to get better. Soon they’ll be on board getting coaching, and training, or seeing their role adjusted so they can live in the star box too.

Soon, the expectation that everyone in the company is expected to live in the Star box is just a fact of life. It’s not debated or hated. It’s obvious to everyone. If you work in any company, you have to try your best and have a good attitude don’t you? Obviously! Isn’t this the assumption of every good person before they get into the workforce?

The people living in the bottom half of the Star Chart may not love this process, because it’s going to challenge them to make some choices about how they want to approach their work. In fact, they may fight against the process, undermine it to their co-workers or even refuse to take part in it at first.

When you are implementing this or any new initiative in your business, ask yourself who will resist it or complain about it. Will it be the Stars? If so, maybe you shouldn’t be doing it. They’re the people who care most and understand the business best. It’s pretty important that they support your new, significant ideas.

If it’s your Non-Stars (in other words, the ones who score low on the right attitudes axis and therefore exist in the bottom half of the Star Chart) that hate the initiative though, I wouldn’t worry too much about it. Your goal is to make your workplace comfortable for the people who care the most and uncomfortable for those who care least.

Performance management: The importance of having Stars in Your Key Seats

In a survey published by Harvard Business Review (Axelrod, Handfield-Jones, Michaels, January, 2002), 13,000 senior managers and 112 companies were studied over a period of five years on the topic of building great managerial talent.

The companies that performed best were those that took deliberate performance management action to ensure that top-tier talent occupied the key seats in the business, and that underperformance triggered consequences. In two companies studied, Star managers grew profits on average 105 percent, while Non-Star managers achieved no profit growth at all. The study points to something that all leaders know without having to read books or articles: poor performers achieve poor results.

The most illuminating finding of the study was that “only sixteen percent of managers strongly agreed that their companies knew who the high and low performers were in the senior ranks.”

While the respondents may have believed this to be the case, I don’t buy it. All leaders know who their weakest and strongest players are. They just choose to not act on that knowledge, so it looks to their subordinates as if they’re completely out of touch with reality and unaware of the most basic of team fundamentals: who is strong and who is weak.

If you were a hockey coach, the caliber of your players would not be a mystery. You would have a list of your players based on performance, from best to worst. Each player would also know he they stood, based on his income, the ice time he received, and the points he put on the board. There would be no secrets in that environment. Those that are most serious about winning are also the most serious about developing and deploying talent effectively.

Your highest performers will love going through the process because their performance will finally be formally noticed. Your lowest performers may dislike the process and try to sabotage it, for similar reasons.