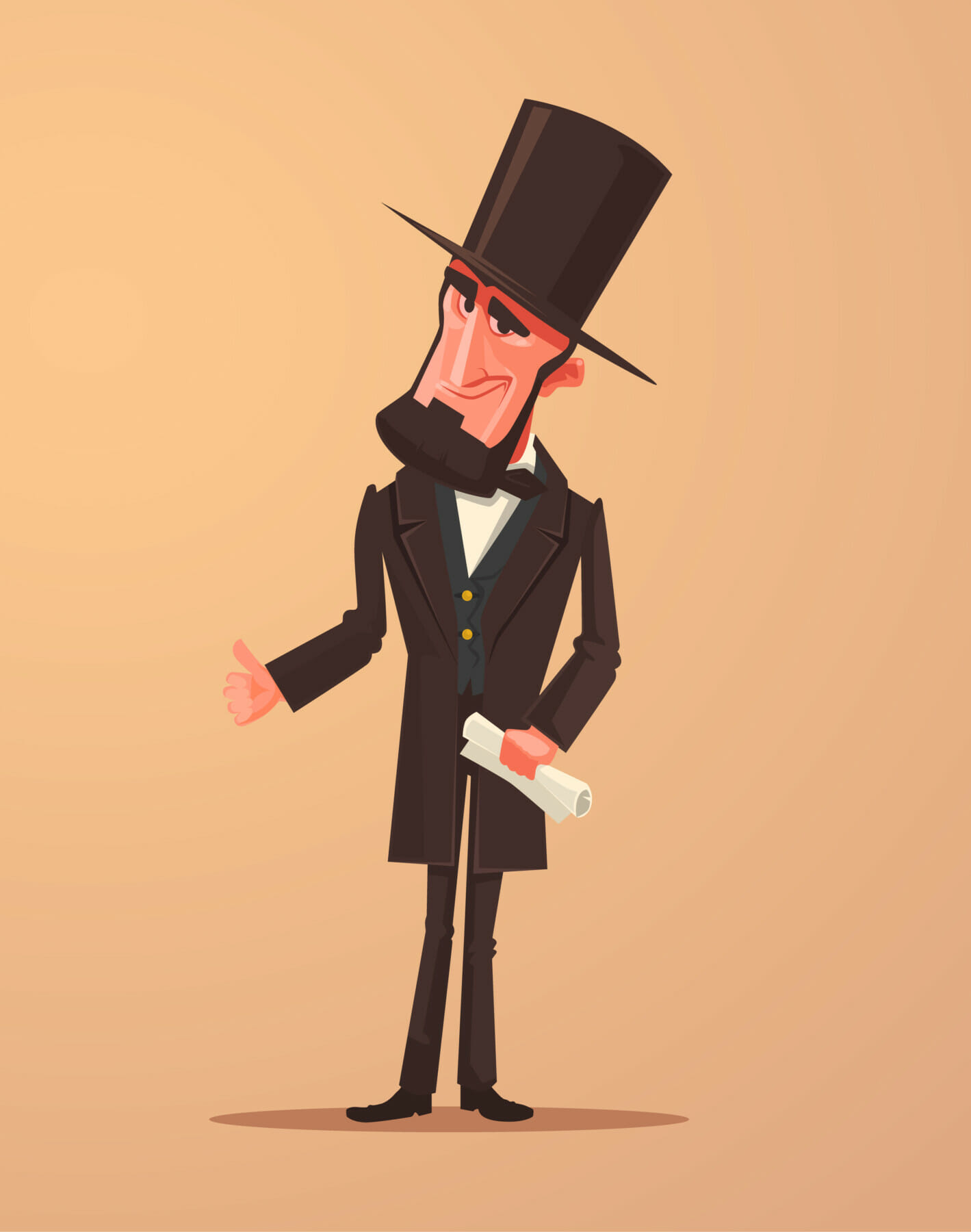 Abraham Lincoln was an American-born lawyer and humanitarian who was elected as the 16th president of The United States. He came from humble beginnings and was a passionate advocate for the people of his country – including those the law at the time saw as less than human beings. Abraham Lincoln quotes have been recited worldwide for their wisdom and insight.

His biggest legacy involved teaching those around him that no man was better than another and that all deserved to be equal and free in the eyes of the law. He was a passionate leader who guided by example, and never expected of others what he wouldn’t do himself.

Below, we shared 10 of his most powerful quotes on leadership. So that you can use them to inspire yourself, and your team. 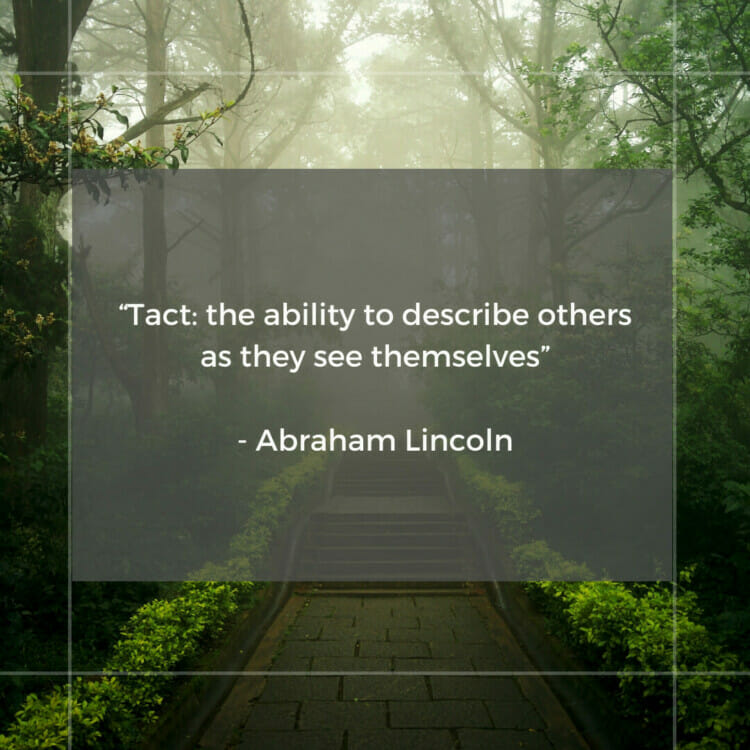 Number 1 on the list of Abraham Lincoln quotes is his definition of Tact. Tact is one of the key traits all leaders should have under their sleeve. The concept of being able to communicate with someone while taking their feelings and emotions into account means creating a moment of trust hard to replicate. All managers should be able to give constructive (or even negative) feedback in a way that doesn’t make the other person feel attacked and singled out.

2. On learning that all people have good and bad traits 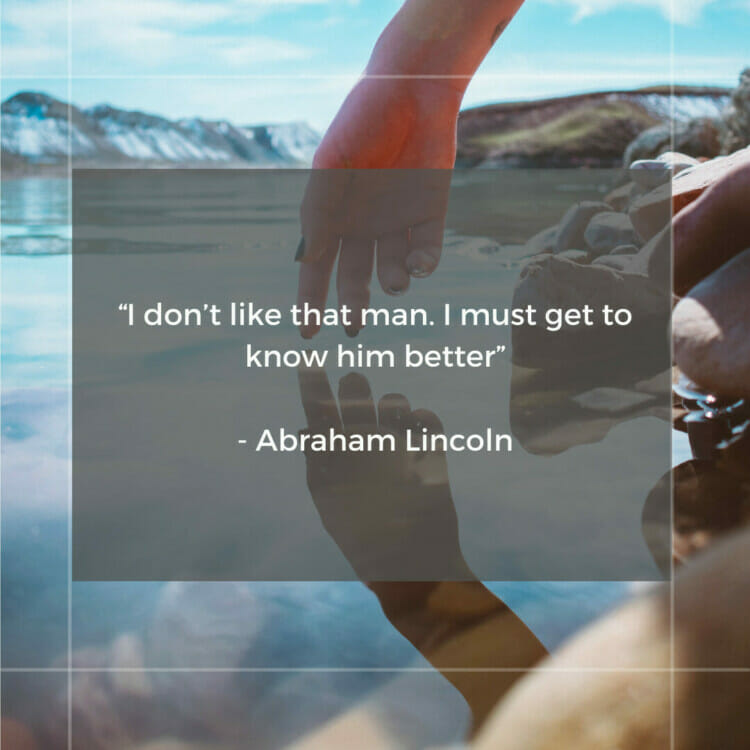 It’s important to be self-aware enough to know when your own biases are playing against you. Generally, when our first instinct is to dislike someone or something it tends to be because we see ourselves reflected there. And being faced with those inner things we don’t like can be pretty uncomfortable. Remember that what we see on the surface, however, isn’t always the real deal. So if you dislike someone, take some time to really get to know them first before making a judgment call you might regret later.

3. On what bravery really is 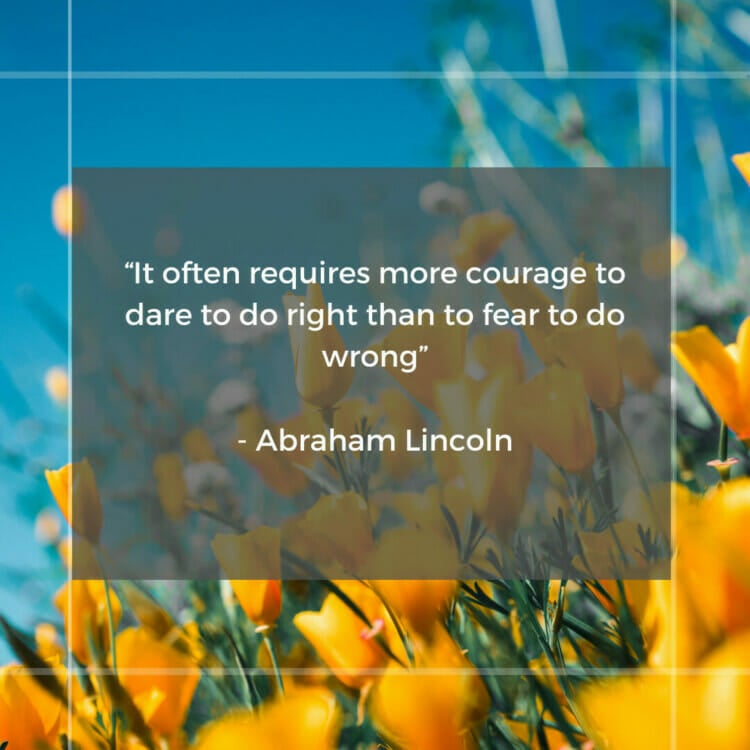 Have you ever heard the definition of courage before? It’s not the lack of fear in a person, but feeling that fear and taking action anyway. Being scared is easy. Most of us worry about things and are scared of certain situations or outcomes. But a true leader will be scared or unsure and lead their team down the path of action anyhow. What Lincoln is talking about here is a variation of that concept. Sometimes, the scariest path is the one we know to be right. Be brave and do the right thing even if you’re scared of how hard it can be – or of what people will say.

4. On learning when to speak, and when to not

Other people’s opinions of you aren’t really any of your business. Let them make their own assumptions about you while you work behind the scenes to achieve your end goal. Don’t speak just for the sake of trying to impress the other person. You risk that backfiring and looking sillier than you intended than if you’d remained silent and chosen to talk when it was really necessary only. And, silence is a blessing. Use it to observe what’s happening around you. Most of the time, we’re too busy thinking of our next sentence to really listen anyway.

5. On the concept of power dominance 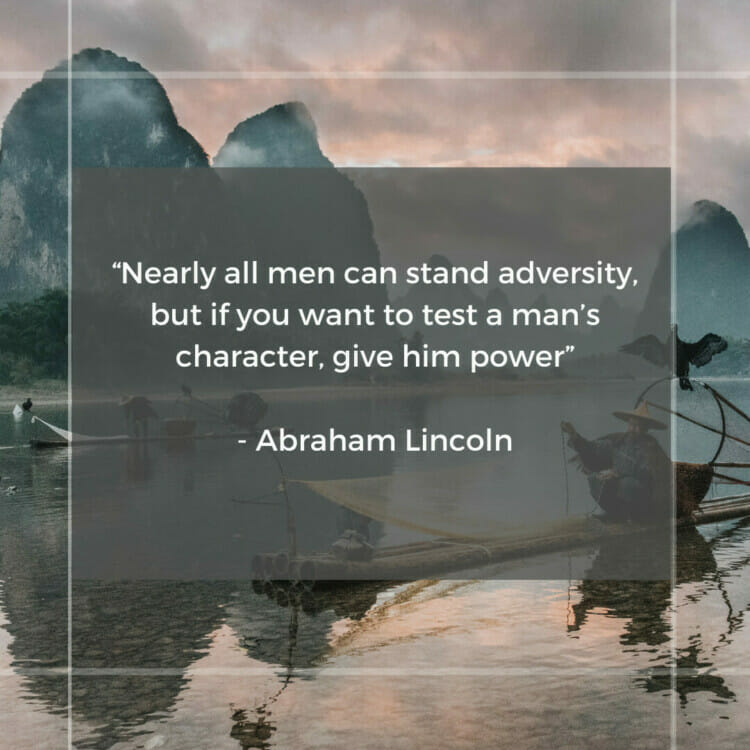 Most of us think that a real person is tested when things get hard. But in today’s age difficulties are a dime a dozen. Your personal life, your work life, even your love life. You’ll find adversity anywhere, which means most people have found ways to cope with those situations. What you can’t easily learn, however, is how to act when you gain power. The true mark of an honest and proper manager happens shortly after stepping into the position. Those people who don’t forget they once were also a team member will do much better than those who conveniently forget and abuse their new power.

6. On how powerful friendship can really be 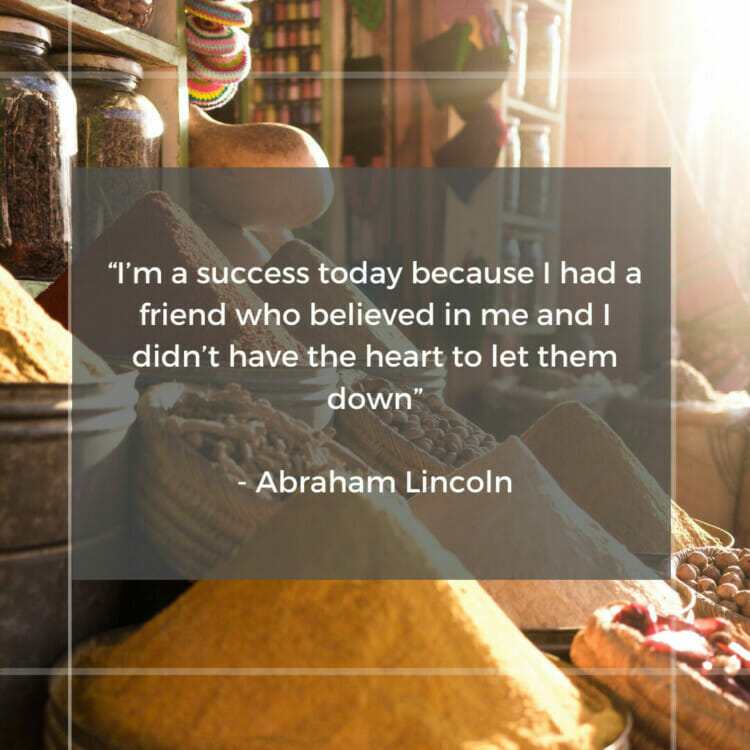 The people around us influence us much more than we realize. Our friends have power over us that we willingly give to them, trusting they’ll be able to use it to help us develop as people without us even noticing. This Abraham Lincoln quote shows that there’s nothing more powerful than a friend (or manager that we like) looking us in the eye and telling us they believe in our abilities.

7. On being your own fortune teller 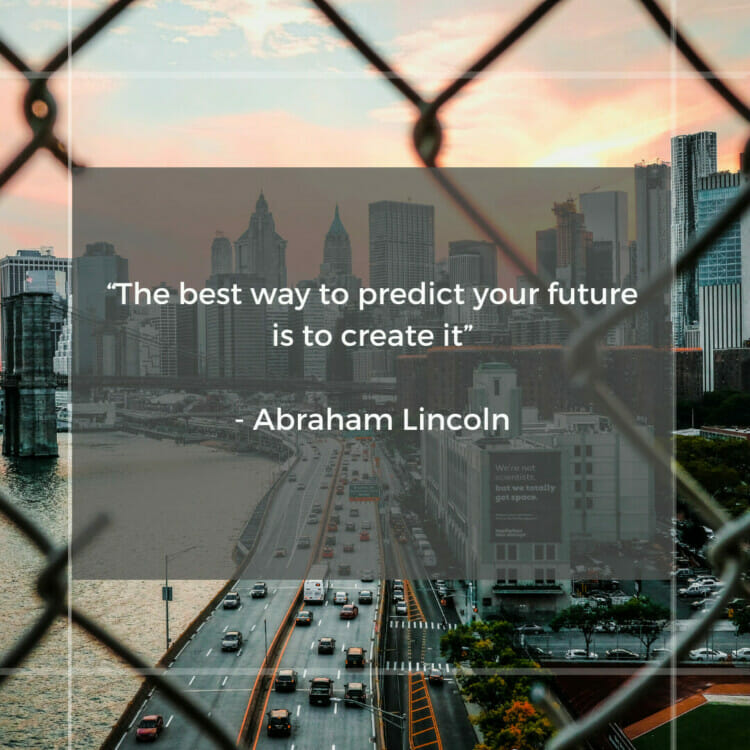 No one can predict the future, but, with a little self-trust and some hard work, we can certainly nudge it in the right direction. Nothing that surrounds your life today was by chance. Whether you realize it or not, every job you’ve had, every class you’ve taken, every conversation with a manager has brought you to where you are today in your work life. So, if you want to change your future and predict it all you need to do is set a game plan and make it happen.

Abraham Lincoln quotes like these are the reason why we created our free course called “Building Your Personal Annual Plan“. Where you will learn how to make your 10-year plan and how you will create your own future!

8. On not being afraid to go at your own pace 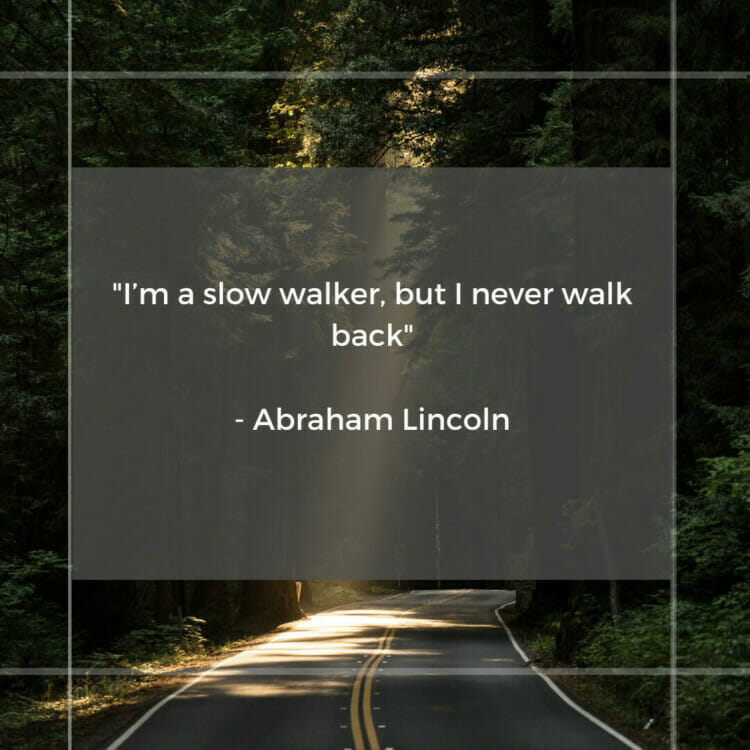 There’s no actual guidebook as to when in your life each stage should come to be. Take your time and make the journey your own. The only secret here is to not look back in anger or regret. It might take you longer than your peers to achieve that goal you’ve been wanting, but that won’t make it any less admirable.

9. On giving more than you think you can 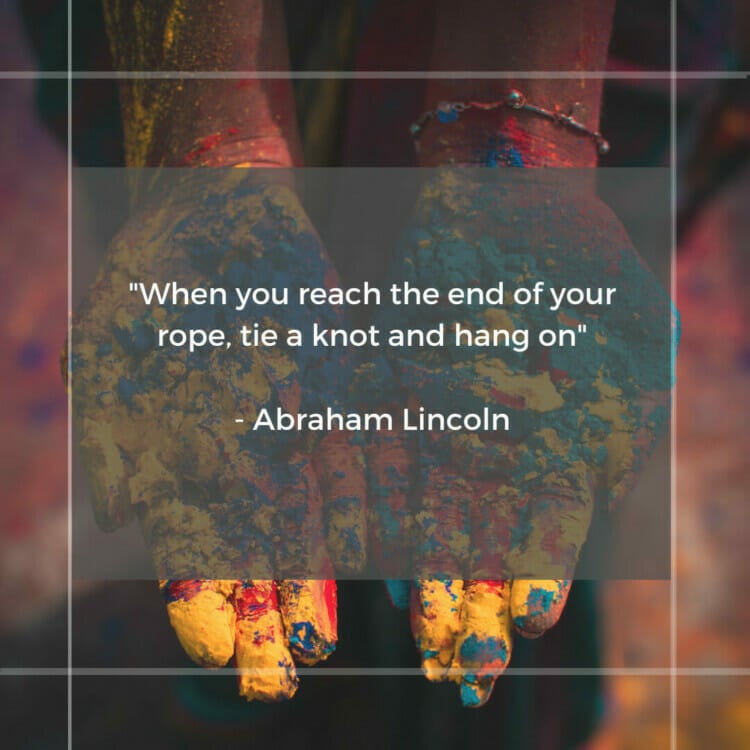 When the going gets hard our first instinct is to give up. And it makes sense. Humans are not wired to deal with difficulties and uncertainty. In fact, our ancestors would probably have given up and turned back home when faced with an angry lion guarding the berry bush they wanted to access. But in modern times, the biggest strength you can offer your team as a leader is the ability to keep going. Don’t give up, and try looking at the situation from another angle. Find something that can ground you, that you can hold on to, and then keep hanging on until you’re able to turn things around.

10. On learning that other’s success is not the lack of your own 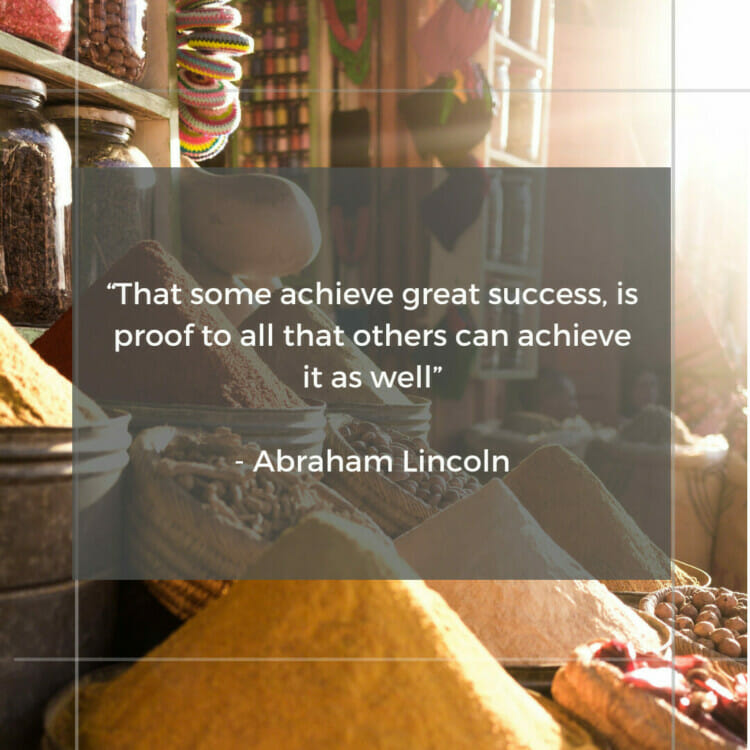 This is one of our favourite abraham lincoln quotes because it speaks to the ability we all have to reach success. There’s no such thing as an enemy or competitor. There’s not a limited amount of success to go around for everyone, and if the person next to you gets it then you’re bound to never have it. Other people’s success is not the absence of your own. In fact, those that truly understand themselves are able to watch those successful people and realize that the only thing setting them apart is their ability to take action. Let their success motivate you, push you forward, and propel you into your own success.