10 Alan Watts Quotes to Calm Your Inner Self 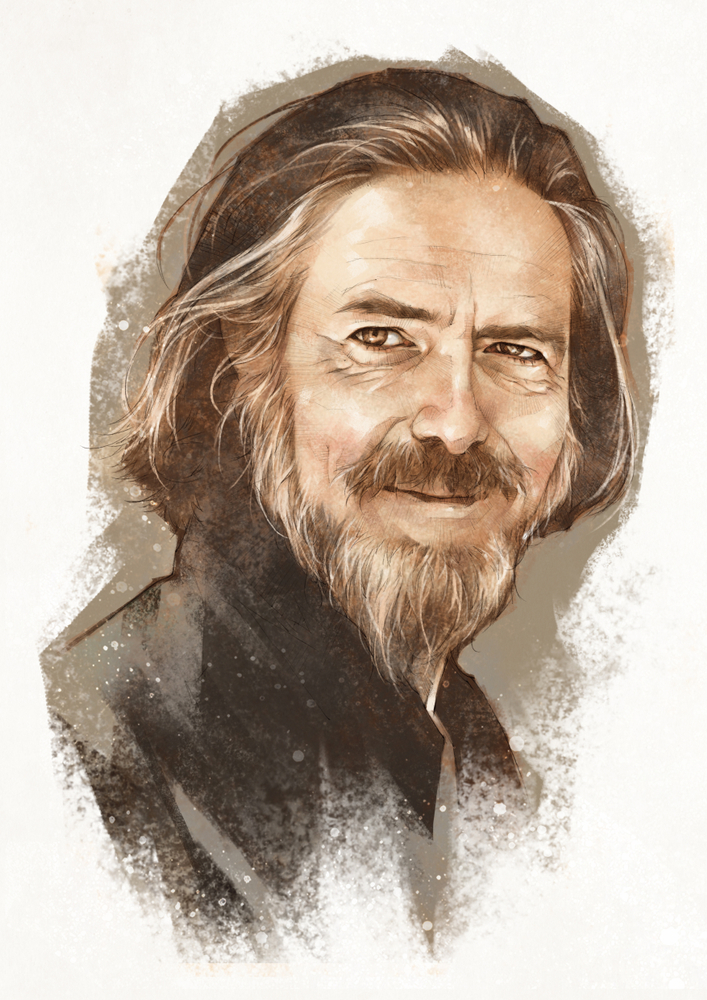 While nowadays the concept of Eastern philosophies and ways of thinking are nothing we haven’t heard before, not so long ago it was something looked upon as mysterious and strange. There is more than one person we can thank for exposing the Western world to these impactful concepts, and one of them is Alan Watts.

A writer and theologist native to The United Kingdom, Alan was a pioneer in bringing Buddism, Taoism, and Hinduism to this side of the world in the mid-70s. Along with those concepts came meditation and mindfulness – two practices that have taken the modern world by storm.

Below, we collected 10 of Alan Watts’ best quotes to help calm your inner self.

1. On only thinking of right now 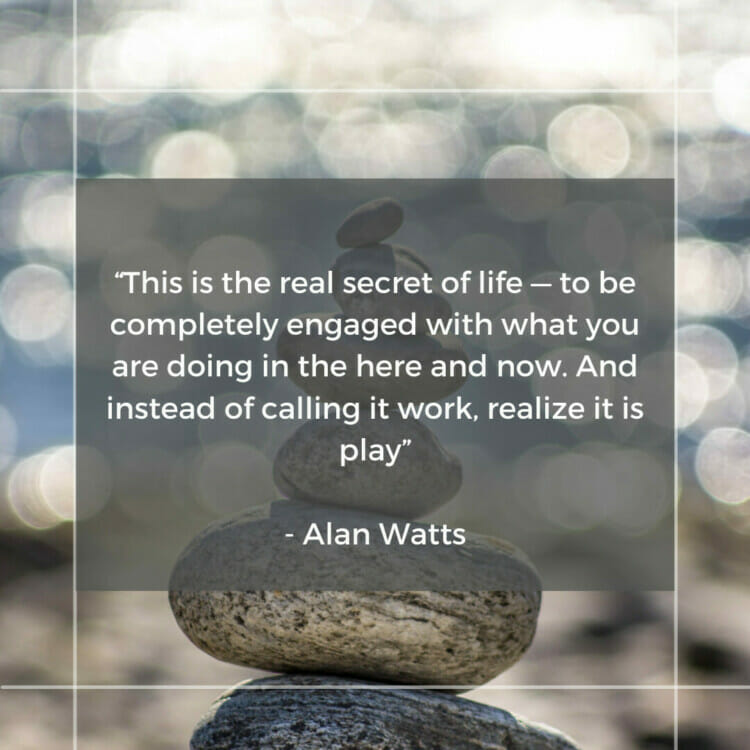 Have you ever realized that in the moments you’re truly calm or happy you’ve forgotten where you are? Or maybe there are no other thoughts in your head other than what you’re doing right now? You look up and the clock says it’s been 2 hours, or you realize you haven’t checked your phone for a while. As Alan says, this is the secret of life. To be so into whatever task you’re doing at the moment that you don’t think about the past or future – just about the right now. It’s also the best tip you’ll even implement when it comes to enjoying your daily job.

2. On how the future will never actually come 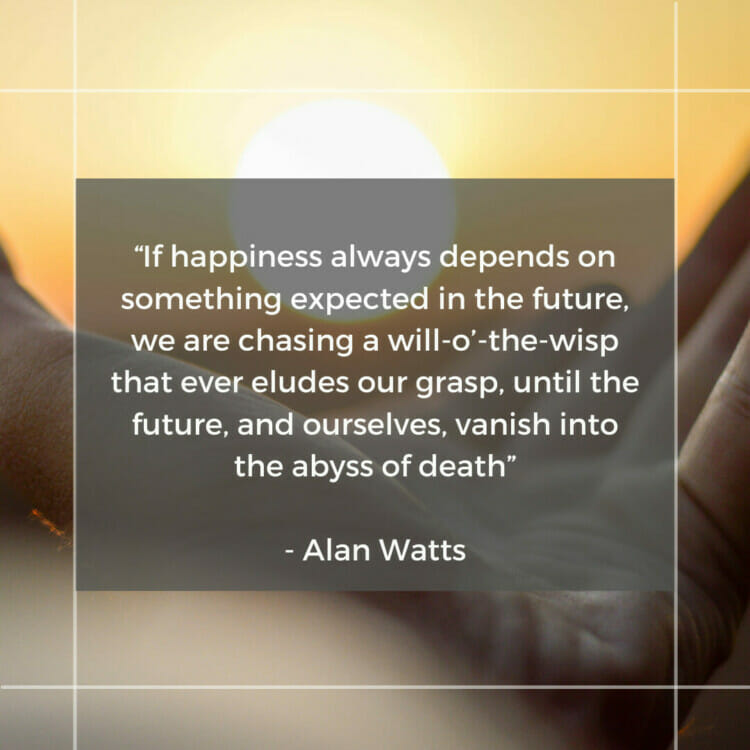 The concept of “future” is a slippery one. It’s technically a moment that has yet to happen, but when that moment does finally arrive it’s also technically no longer the future. It’s now the present. With that definition in mind, the future is very well never actually here at all. And so, if you place your happiness on a moment or person that’s in the future you’ll never reach it. And you’ll never experience happiness. Teach yourself to find those emotions in the right now, not in the tomorrow.

3. On the secret of life 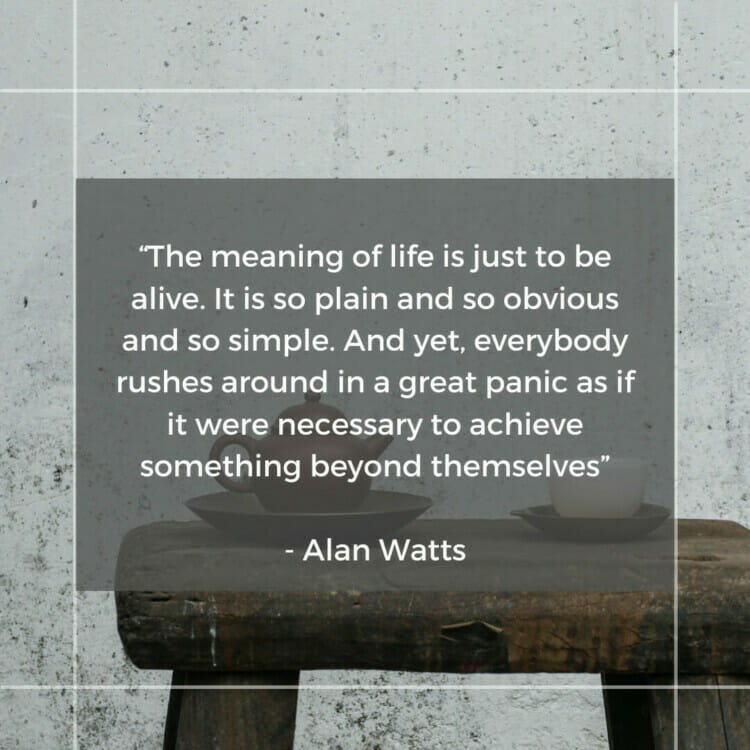 There are many people out there claiming to know the secret of life. In our opinion, however, Alan seems to be the one closest to the real deal. And what is that secret, you may ask? Well, to just be alive. Simple as that. It’s not to leave the world better than you found it, it’s not to figure out your purpose, and it’s not to make tons of money and have fun. While all those things are wonderful objectives, it’s not why we’re here. We’re here simply to experience life. Whatever that may look like for each of us. Remove the stress of not knowing why you’re here and simply sit outside on a fall day enjoying the view of the falling leaves. That’s the secret.

4. On simply doing what you love to do 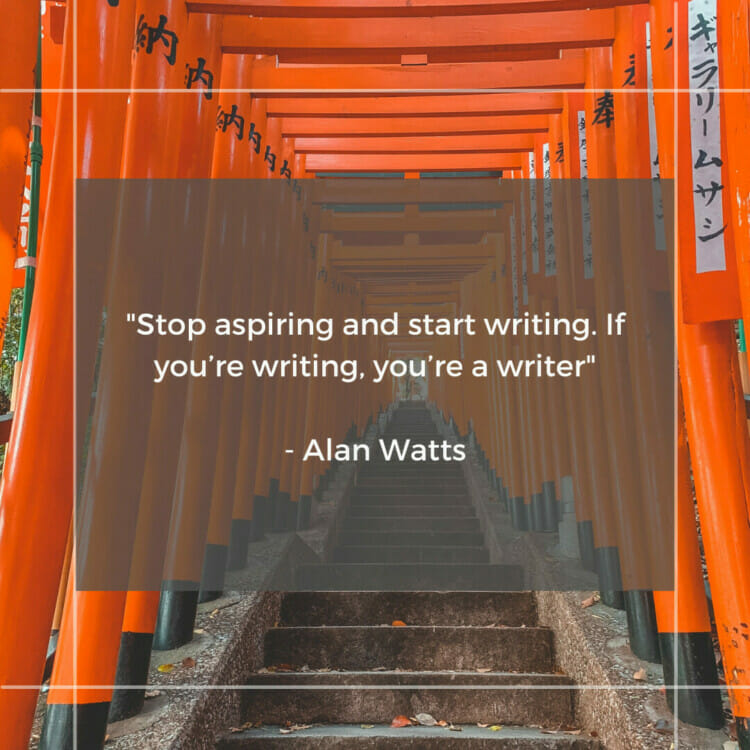 So many of us live with the pressure of titles we don’t feel we deserve. Especially when it comes to working. But there are no rules as to what you need to have accomplished in order to officially do what you love. If you write then you’re a writer. If you take pictures then you’re a photographer. Every single person you look up to in your field also started where you are. Nothing sets you two apart other than action and patience.

5. On the beauty of everchanging things 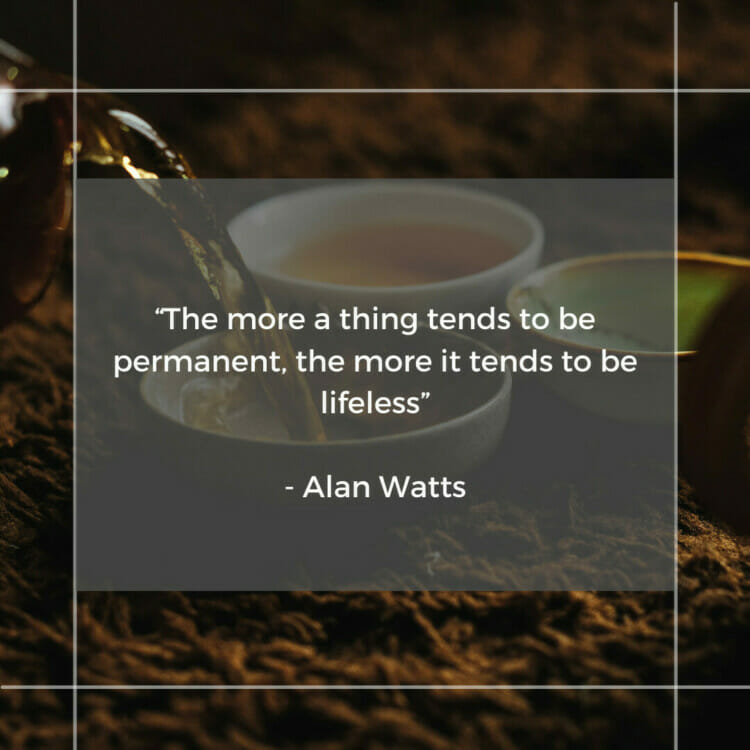 This is one of Alan Watts’ quotes about how everything changes. That’s the nature of the universe. Rivers are always moving, trees die, rocks become sand, and even metal can decompose. With that concept in mind, anything that doesn’t change isn’t alive at all. So take pride in being an ever-changing part of the universe. It means you’re alive and experiencing life. Sad emotions won’t last, and neither will good ones. And what can be more fulfilling and beautiful than that?

6. On how you’re incredible just as you are

Did you know there was only one chance in 400 trillion of you being born? With those odds, there are no possible ways mistakes were made. You are perfect just as you are. And, you are just as much a part of nature as the elements you see when you take a forest walk. Or when you’re lounging on a beach. You wouldn’t change those because they simply are what they are. That same idea can be applied to you as a human. There’s no pressure to do anything other than exist since we should be holding all creations of nature to the same standard.

7. On how things are scary only until they’re done 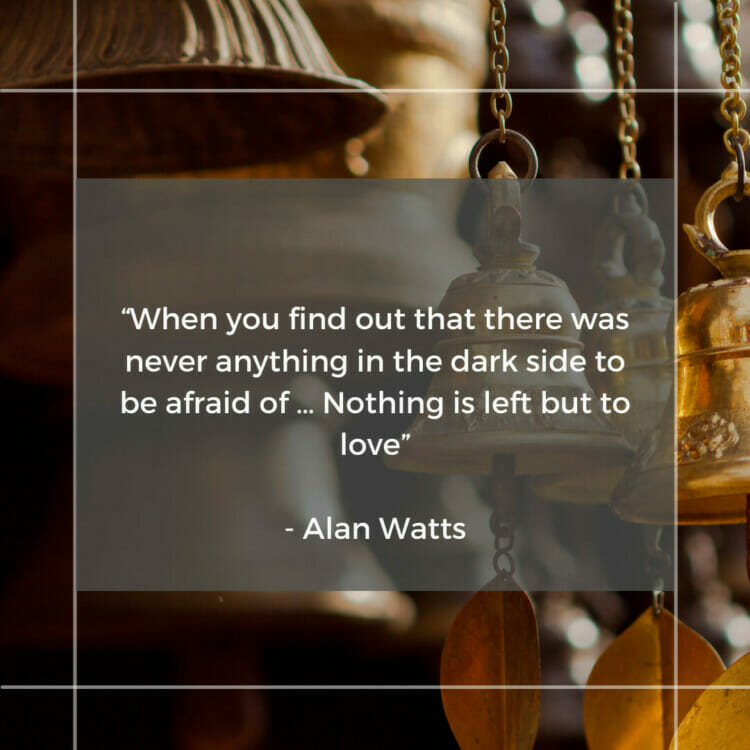 This is one of Alan Watts quotes about embracing your fears and by doing so, achieving liberation. The unknown can be terrifying. But the truth is, things are mostly scary until they’re done. And when you’re able to internalize this idea that the darkness of not knowing isn’t something you should really be afraid of, facing life will be much easier. Less anxiety, fewer doubts, and more enjoyment.

8. On how to diminish feelings of anxiety 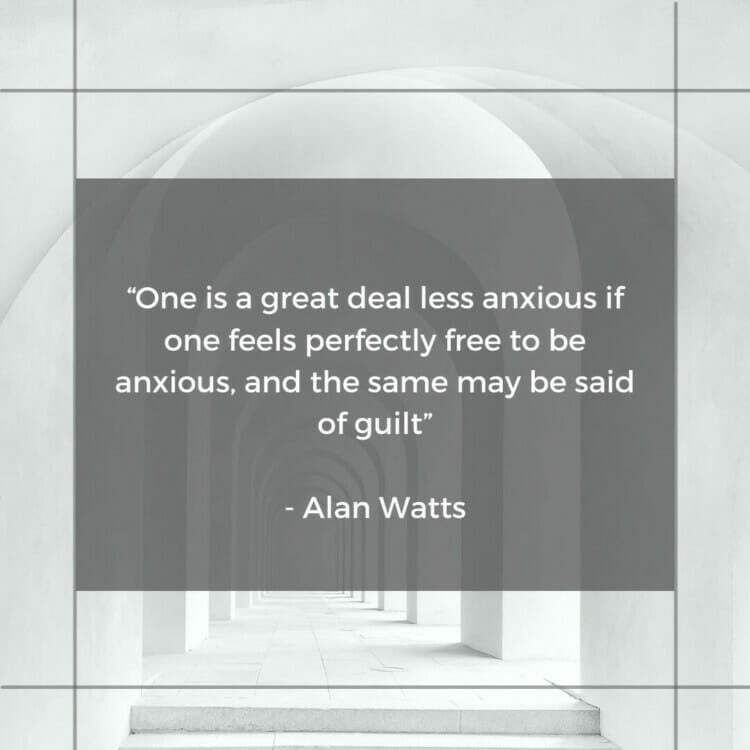 There’s a strange freedom that comes with giving yourself permission to feel those emotions you’ve been taught to be ashamed of. When we fight our most basic feelings (like anxiety) we prevent them from completing their path in our minds and they can end up sticking around longer than we want them to. So, give yourself permission to feel them. They’re not bad emotions, they’re not good ones – they simply are. When you’re able to learn how to observe them from an angle of curiosity and not judgment you’ll realize they no longer hold the same power they once did.

9. On the reality of the concepts of right and wrong 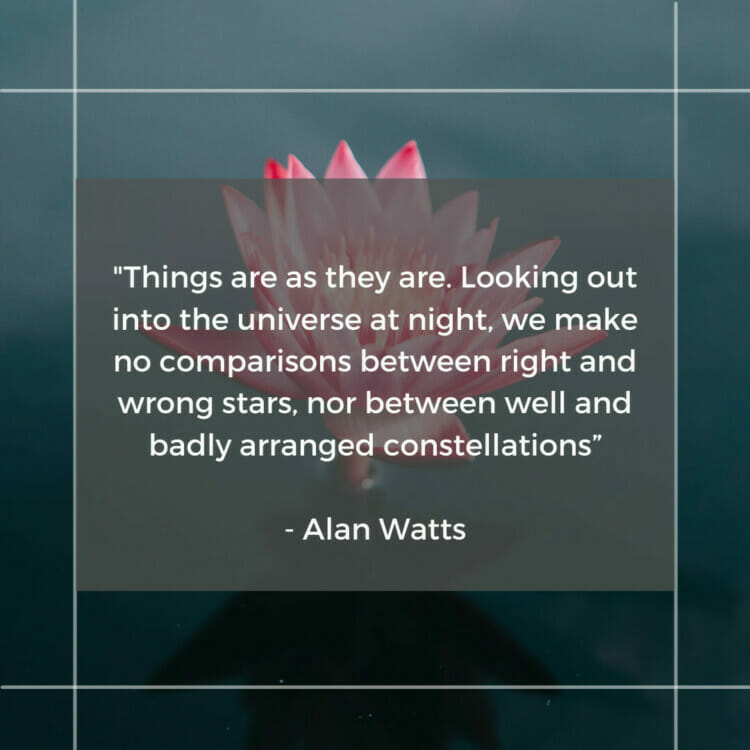 This is one of Alan Watts quotes about acceptance being the highest truth. Baring some very obvious exceptions, the idea that there are right and wrong ways of doing things is not something the whole world shares. There is no universally accepted rulebook of what is right or wrong, and most of those concepts are things we’ve been taught to think about by the societies we live in. While this might sound like an overwhelming, and a little out-there, concept it can actually bring you a lot of calm. Think about it this way: if there’s no law that states you need to feel like you’re not good enough because you haven’t found your dream job at 30, wouldn’t that help relieve some of the pressure there? The same way we don’t judge the stars in the sky for being too far left, we shouldn’t judge ourselves either. 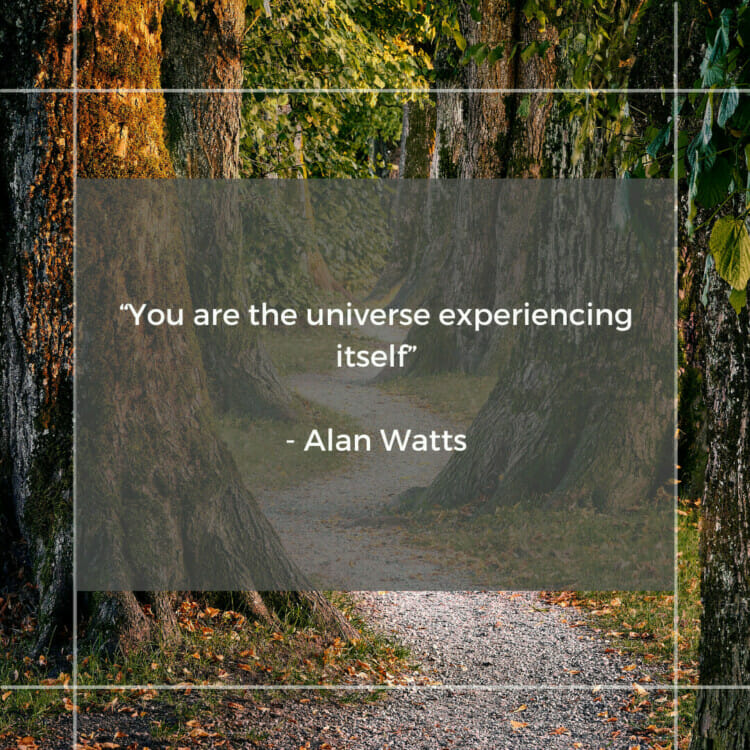 We left this one of Alan Watts quotes for last because it can be a tricky one to internalize. But, before you go running for the hills thinking we (or Alan) are sharing some new-age crazy theory, hear us out. Everything in the world that has ever existed is essential the world itself. We as humans are part of this universe we live in, and so our existence itself is essentially the universe experiencing itself. We, people, experience water, laughter, love, and animals. They are the universe, and therefore so are we. This is a concept meant to explain that our consciousness, that little running monologue we have in our heads, and how it’s really just the universe trying to understand itself.