10 Confucius Quotes To Live By 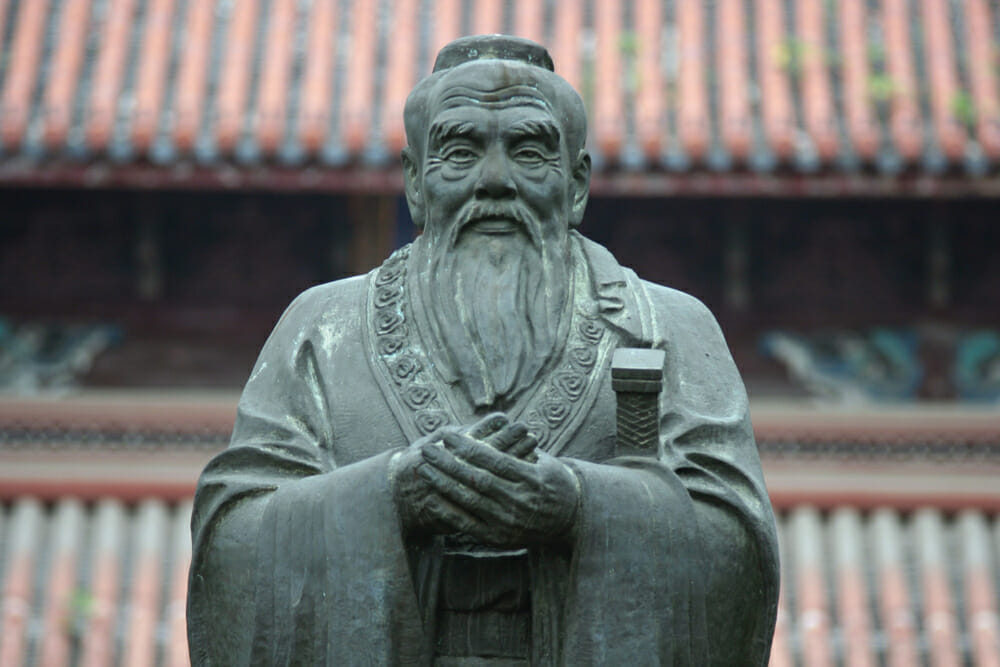 Widely considered the first teacher in Chinese culture, Confucius’ quotes were so universal they’ve been applicable for hundreds of years. His teachings are also thought to have been the basis of modern morals and ethics.

As a philosopher, Confucius was timeless. So it makes sense that he would be on society’s list of big figures in history from which we can all learn something.

Keep reading to find 10 of Confucius quotes we should all strive to live by.

1. Confucius quote on the power of taking your time 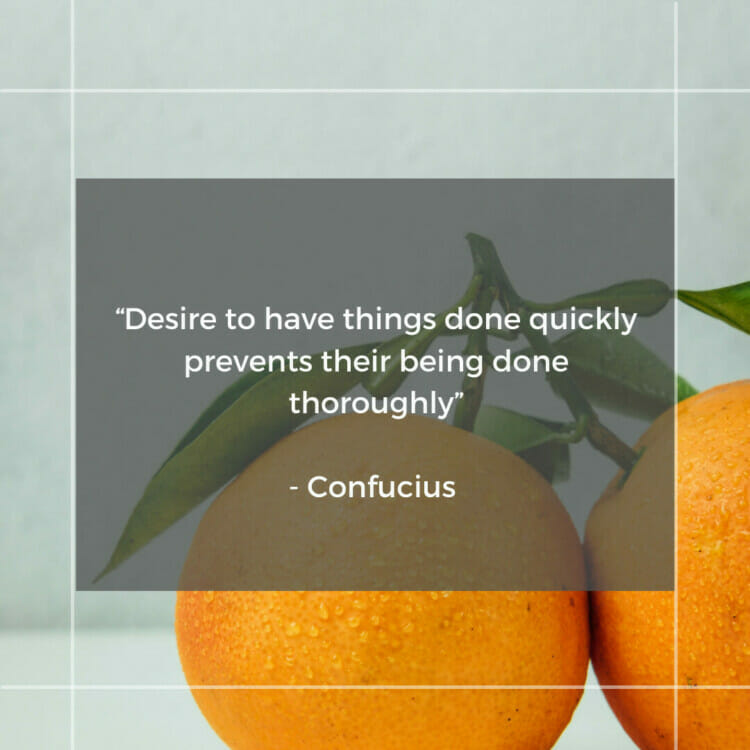 There’s nothing more efficient than taking all the time you need to complete a task you’re short on time with. While it might sound counterproductive, there’s something to be said about making sure things are done right the first time so you don’t have to double back and do it again. After all, imagine doing something halfway only to find out, in the end, you forgot an important detail. So then you have to start all over again taking way longer than if you would have spent a little more time, in the beginning, to make it’s done right. 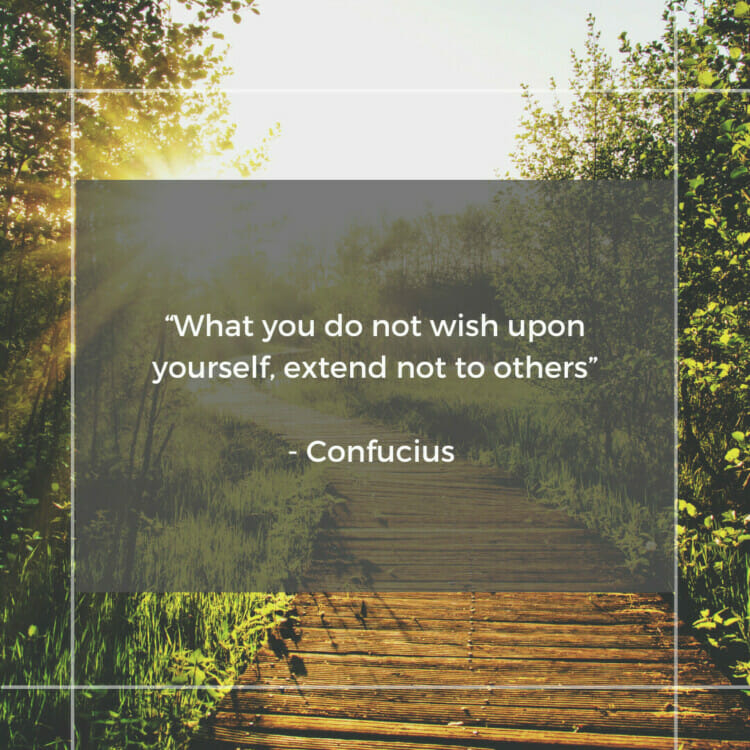 If you wouldn’t want someone doing something you do like to you, then you should not be doing it to someone else. Also known as The Golden Rule, it’s a principle that you’ll find in most cultures and religions. Coincidentally, it’s this exact Confucius saying that’s reported as having been the first recording of this rule. Essentially, it’s very important for our morals and our concept of self that we respect others as we would like to be respected.

3. Confucius quote on taking your time to react to anger 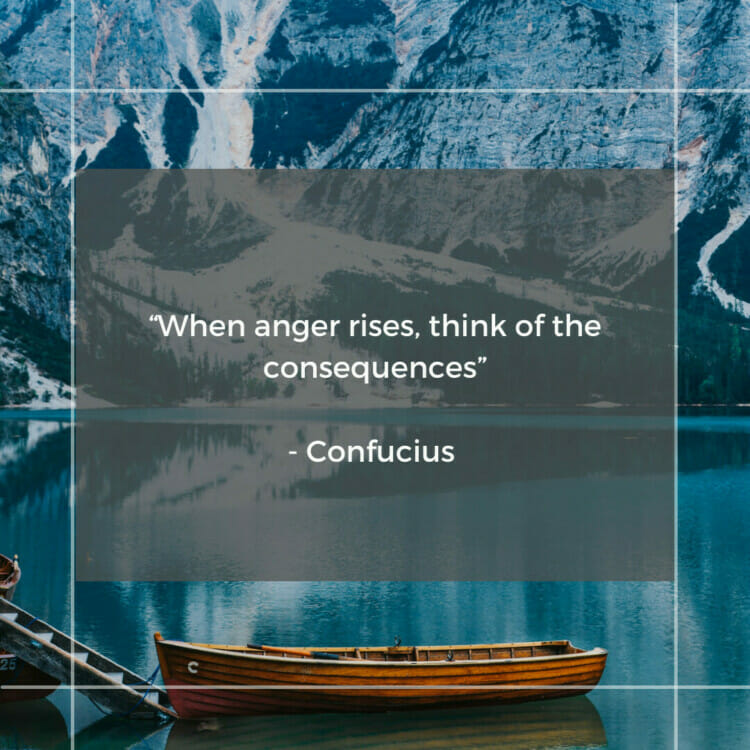 When we’re in the midsts of anger it’s very difficult for our brains to make clear and objective decisions. We’re overtaken by emotions and end up doing or saying things we regret later on. While there are coping mechanisms we can practice in order to have a more clear head in moments of anger (like meditation, conscious breathing, and focusing on something simple like counting), the biggest ability we can have is what Confucius is sharing here. Think of the consequences your actions can have and really consider if that’s something you’re willing to take on.

4. Confucius quote on not using honesty as an excuse to be harsh 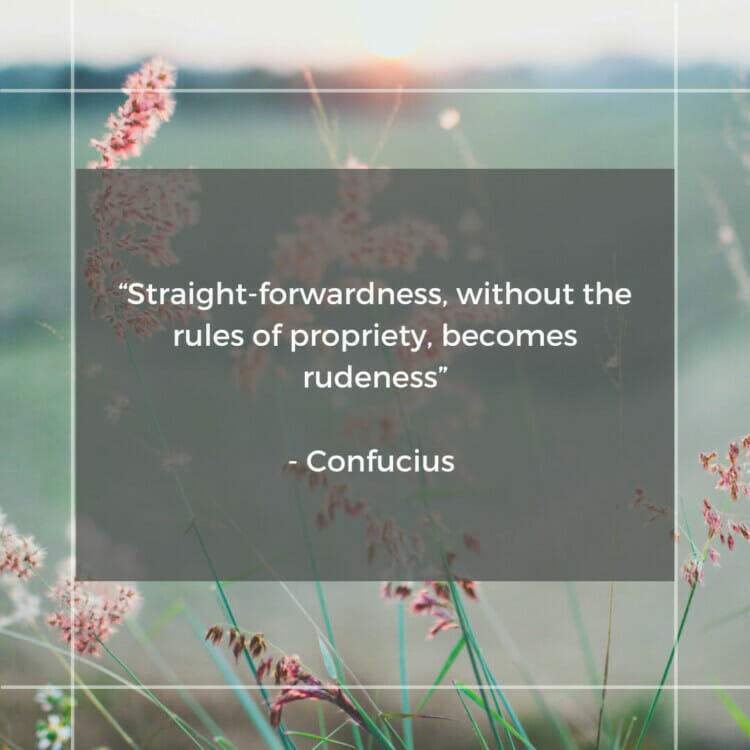 Honesty without tact is simply being rude, and no one likes a rude person. While you should always strive to be honest, both with yourself and others, simply stating the truth won’t put you on the moral higher ground you might think it is. It’s much more complicated to find a kind and constructive way to share that truth than it is to simply blurt it out. Especially if it’s a truth we weren’t asked about in the first place. Practice tact, and then use both that and your ability to be truthful to find the sweet spot you need.

5. Confucius quote on how breaking things down into smaller bites 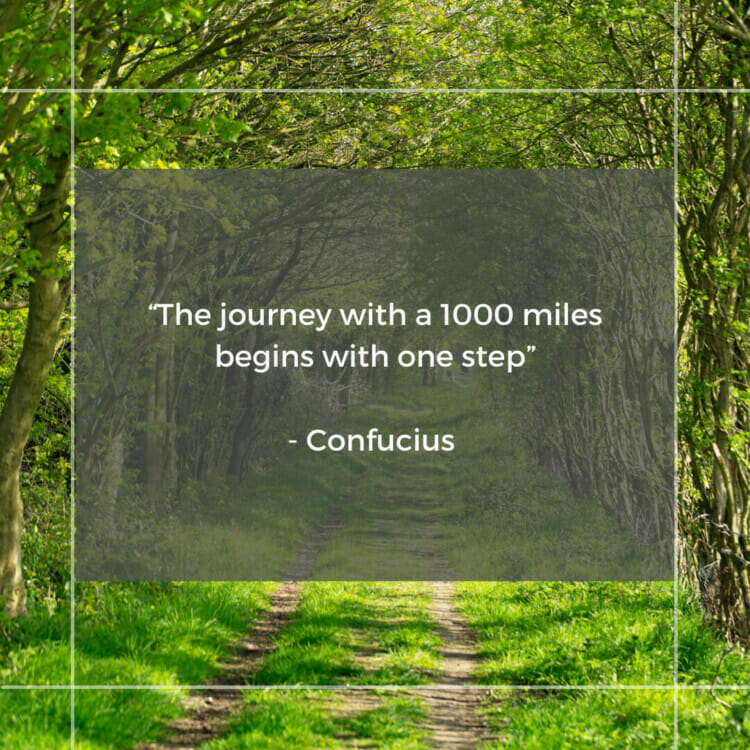 Everything will seem hard and daunting until you look back and realize that it all started with one small and simple decision. When faced with a big work project or personal goal start by breaking it down into simple steps first. Crossing out smaller tasks of a big list will help you feel like it’s a much more manageable situation. In the end, you’ll realize that you’ve accomplished something huge, but in the journey to get there it felt achievable and easy.

Begin your journey today with our free course, “Building Your Personal Annual Plan”

6. Confucius quote on the benefits of finding the silver lining 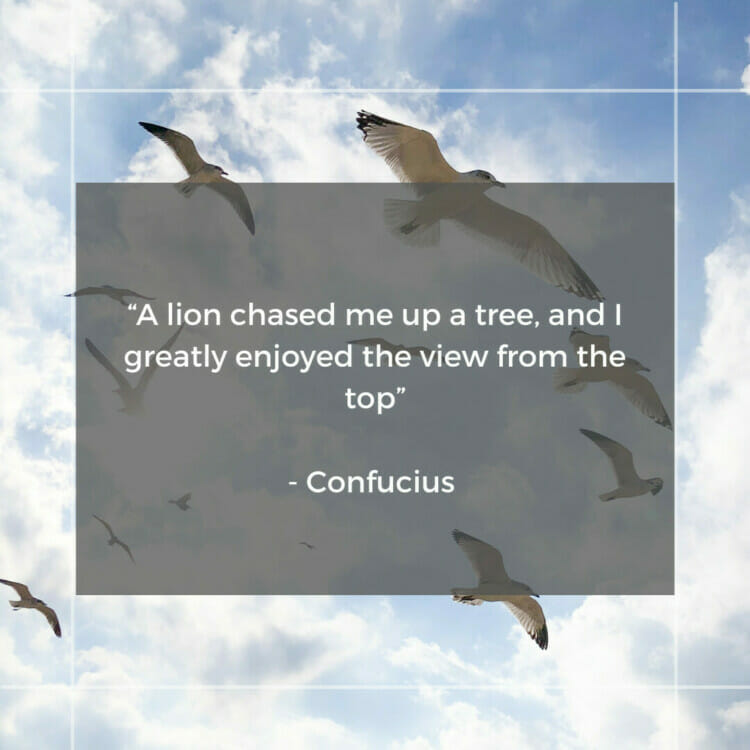 Confucius quotes like this remind you that you will always have to face hard moments in your life. Big or small, no positive thing comes without some sort of sacrifice or loss. Life itself is a series of up and down situations, and those than enjoy it the most have the particular ability to see the silver lining in everything. This is the secret to life. Even though you might end up in a hard situation without trying, like Confucius being chased up a tree by a lion, you can always find a positive angle if you look for it. In his case, Confucius was able to enjoy the view up high which he probably would have never been able to see otherwise.

7. Confucius quote on understanding that you’re not a superhuman 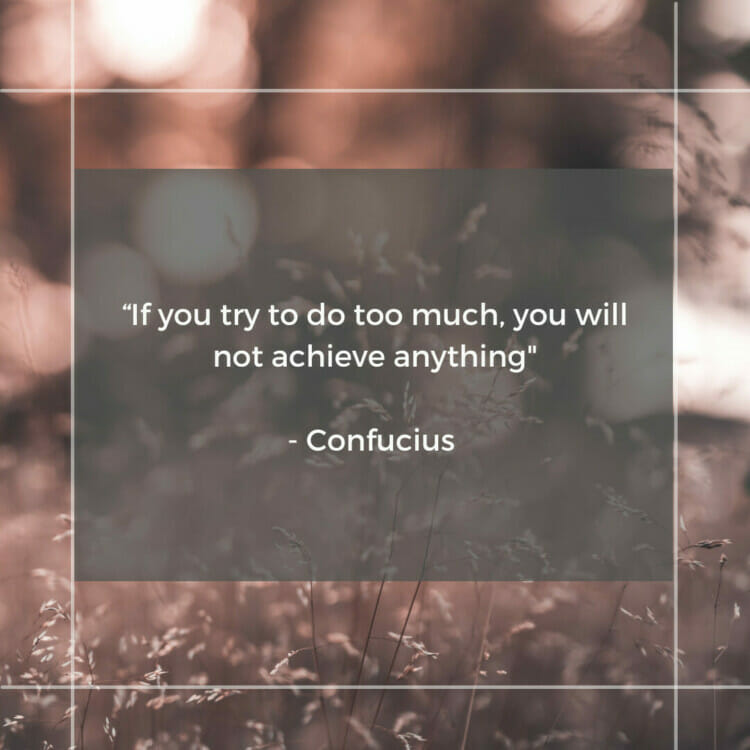 Confucius quotes like this remind me of the saying, “Jack of all trades, but master of none”. Have you ever heard that saying before? Because it very much seems like Confucius has. You’re not superhuman, and you can’t (and most importantly, shouldn’t) try to do everything yourself. There’s beauty in having other people help you achieve your goals, but also in taking the time to become good at just one thing.

8. Confucius quote on how everyone around you can make you a better person 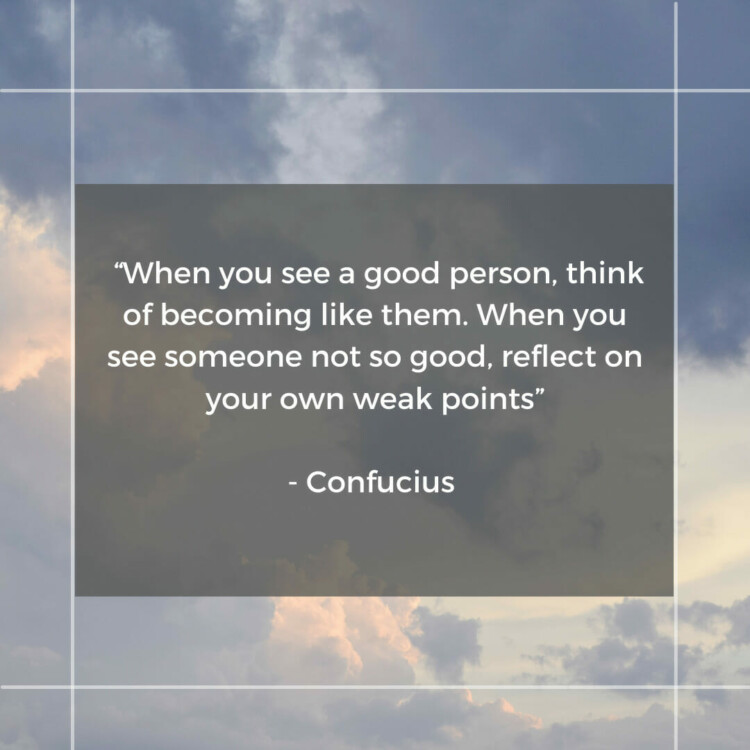 This Confucius quote reminds us to not look at other people as your competition. Instead, use them as inspiration to propel you forward into the type of person you want to be. Did someone else get that job you wanted? Be happy for them, and look at what they did differently than you so you can copy that next time. Is a friend closing on a brand new house? Don’t envy them. Talk with them about their saving strategies so you can also own your dream home one day.

9. Confucius quote on how wonderful it is to fail 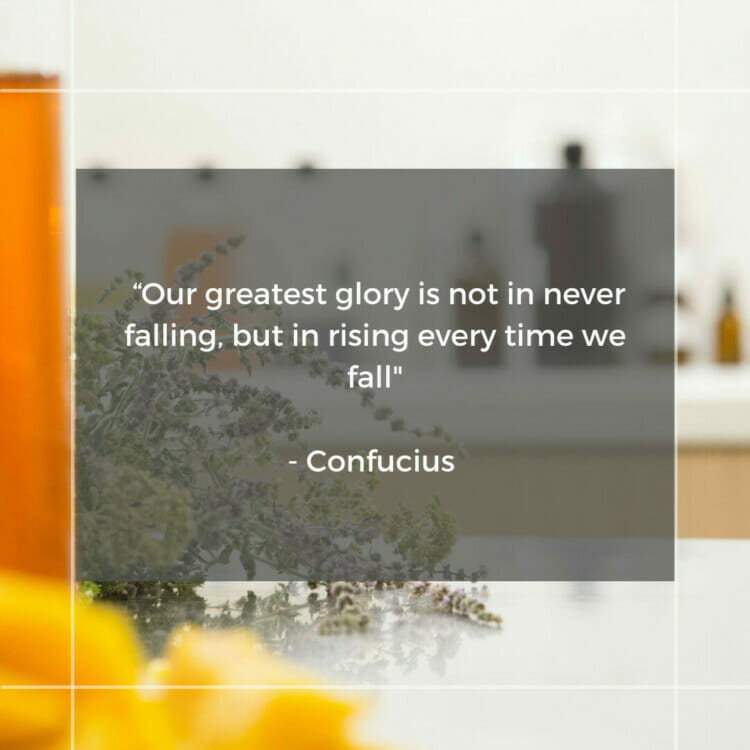 The best lessons are learned from those moments in which we failed, not only in those we succeeded. When we achieve our goals we learn that the steps we took worked and that we should repeat them next time. But when we fail, we can actually also learn a similar lesson. That is, what not to repeat for next time. Trial and error will help you prevent failure in the long run.

10. Confucius quote on not judging others unless you look at yourself first 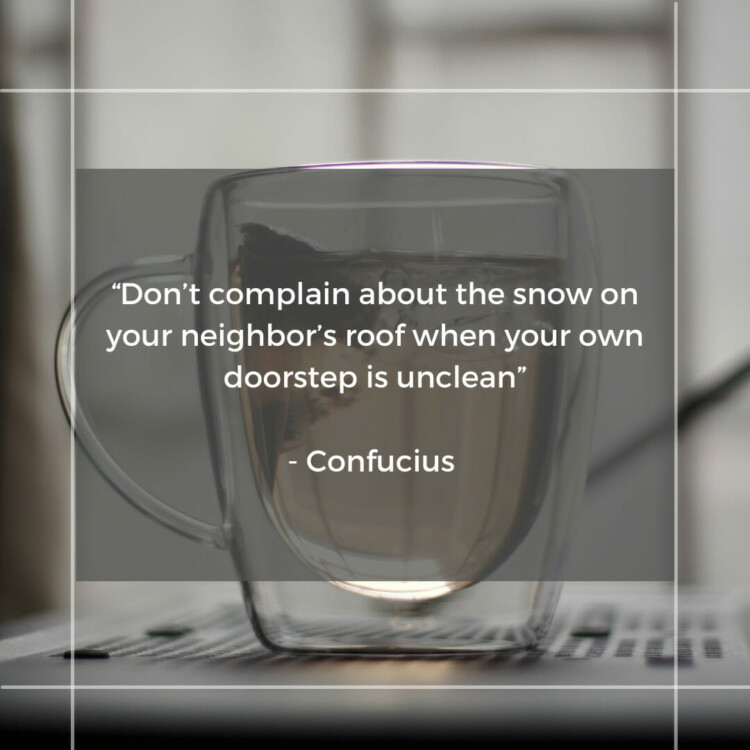 None of us are perfect, and a perfect person should really be the only one allowed to judge others. Before looking at your neighbor or co-worker to complain about something you consider they’re not doing correctly, instead focus that energy and attention on yourself first. Work on your own person, and you won’t have time to focus on anyone else.