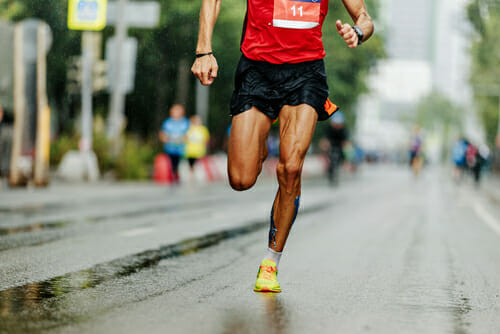 David Goggins has one the biggest transformational and inspirational stories you’re likely to ever hear about. And if you’ve never heard his name, then you’re missing out on some intense life lessons.

Born in 1975 in the US, David Goggins was not the person you’d expect to hold a Guinness World Records in fitness, nor become a decorated military member. At 24 years old he was over 300 pounds and working as a pest exterminator with just enough money to live paycheque to paycheque. But luck would have it that during a day when he was feeling particularly down about himself he saw an ad on TV about joining the Navy SEALs.

While it wasn’t a beeline to success (there’s were struggles, hard work, and intense consistency), David today is the only person to ever complete training to become a Navy SEAL, an Air Force Controller, and an Army Ranger. He also holds a Guinness Record for the most pull-ups done in 17 hours (it was 4030, in case you’re curious), and is an accomplished ultra-marathoner, triathloner, and ultra-triathloner.

We collected 10 of the most powerful David Goggins quotes to help you train for the marathon that is life.

1. On how thinking you’re not good enough is never the truth 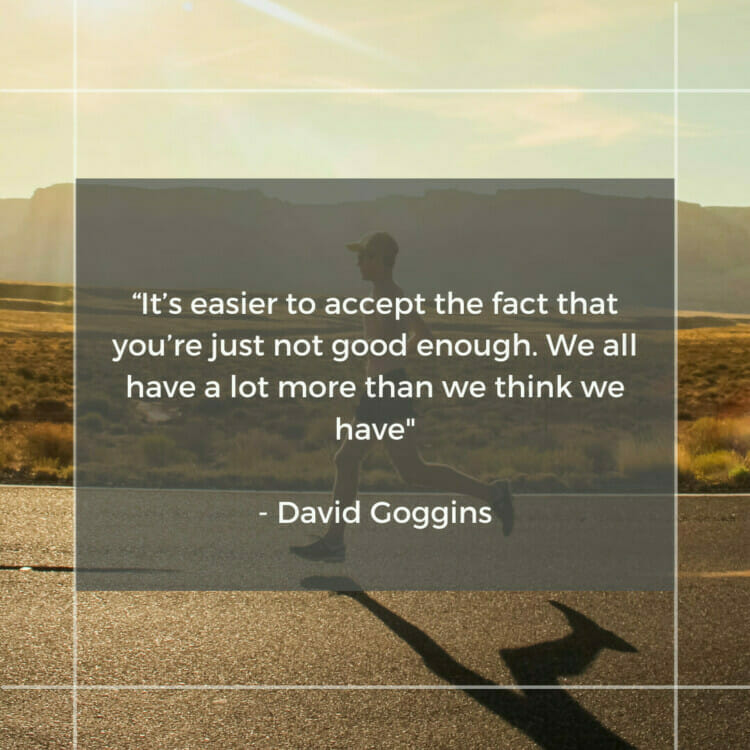 Complacency is an issue most people in society seem to face. It’s also one of the handfuls of things that set successful people apart from those that are not. The most common excuse you hear is that they’re simply not capable of achieving that big dream they have. They’re not good enough, or smart enough. So why even try. Does this sound familiar? It’s much easier to say you just can’t do it than face the idea that you can, but the amount of work you’ll have to put in is much more than you wanted to. 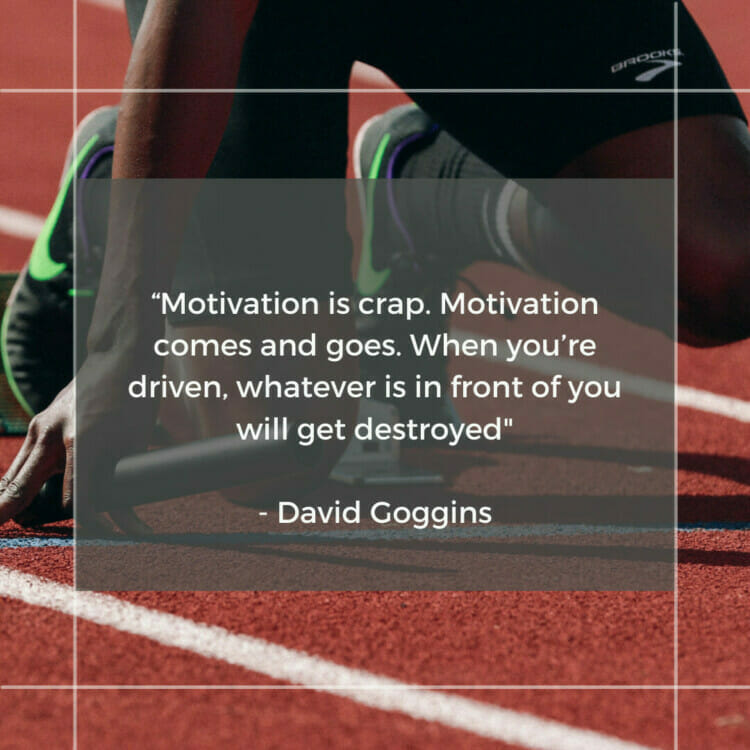 People tend to have this idea that motivation is waking up every morning wanting to take action. And for most of us, that’s not how it happens. Few people start the day pumped to do cardio, or read that boring Marketing report. What all those people have in common, however, is that they never forget what their ultimate goal is. It could be something as small as wanting to not have lower back pain every day (so you start working out), or as large as working towards that big promotion you’ve been chasing for a while. Remember why you started and you’ll never give up.

3. On where growth really happens 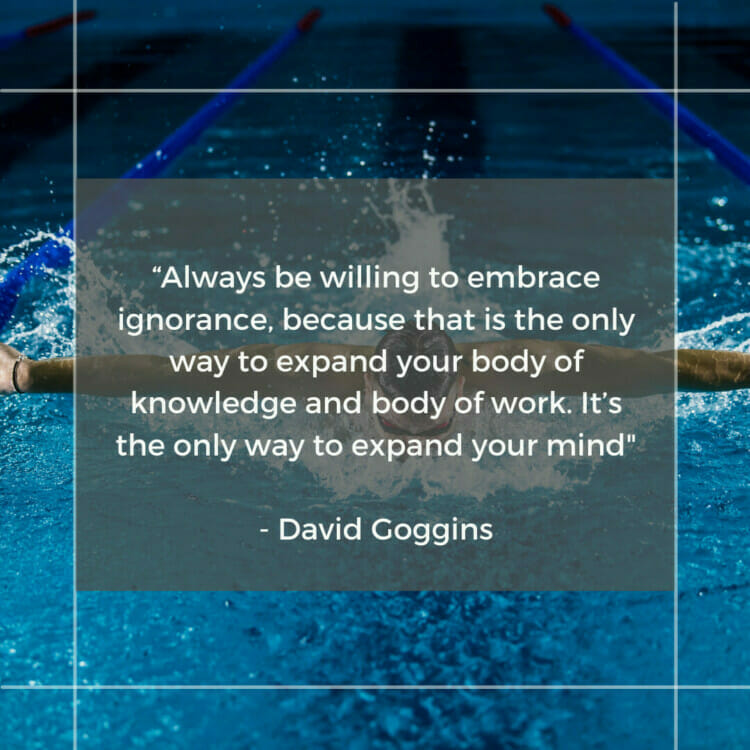 Never be ashamed of admitting that you don’t know something. It’s the people that can speak up when this happens that open the door to the possibility of learning something new. And we all knew, learning is the only way to grow and become better. Not sure how to complete that project you’re given? Ask. The next time you have to deal with it you’ll know exactly what to do.

4. On learning how to fail 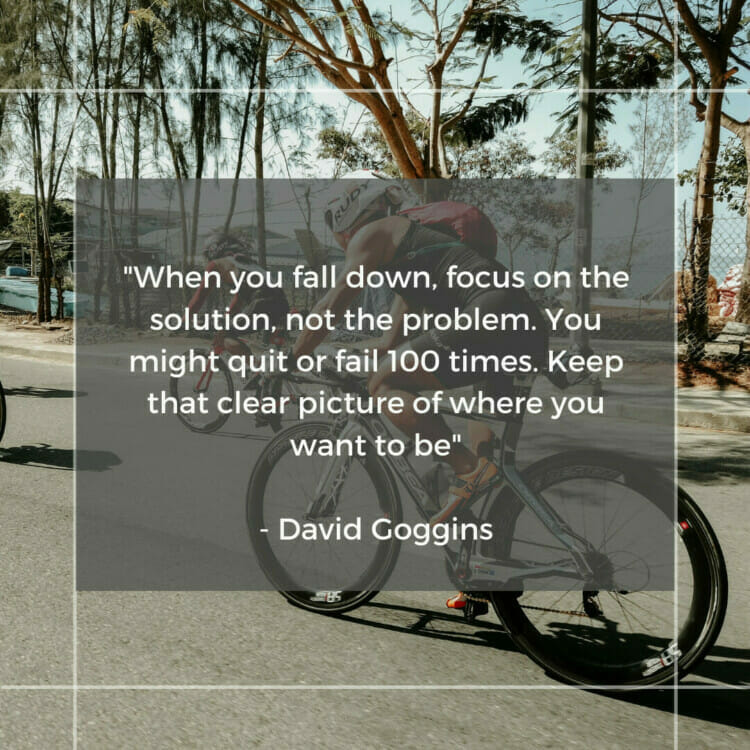 Failing is an inevitable part of life. The secret is to actually learn that you need to keep getting up. You should never give up if it’s something you truly want, and so when the fall comes (because it will happen at some point) and then comes again and again, keep a clear view of your end goal. Use that vision of you achieving that thing you want is what propels you to keep picking yourself back up and trying again.

5. On how success really happens 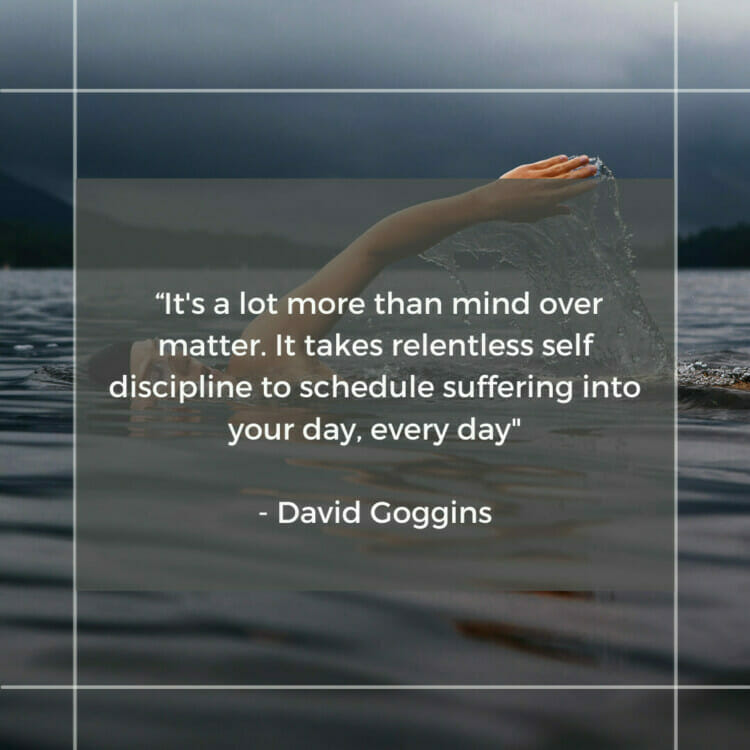 While David here is talking about physical suffering because of the type of physical goals his journey led him to, it also works for mental goals. We wouldn’t use the word suffering necessarily (something closer to accepting might be a better option with a less negative connotation), he does make an important point. Motivation isn’t what makes you successful. That comes from being disciplined enough to accept all the bad things that will come with the process – and doing them anyway.

6. On not caring what other’s think 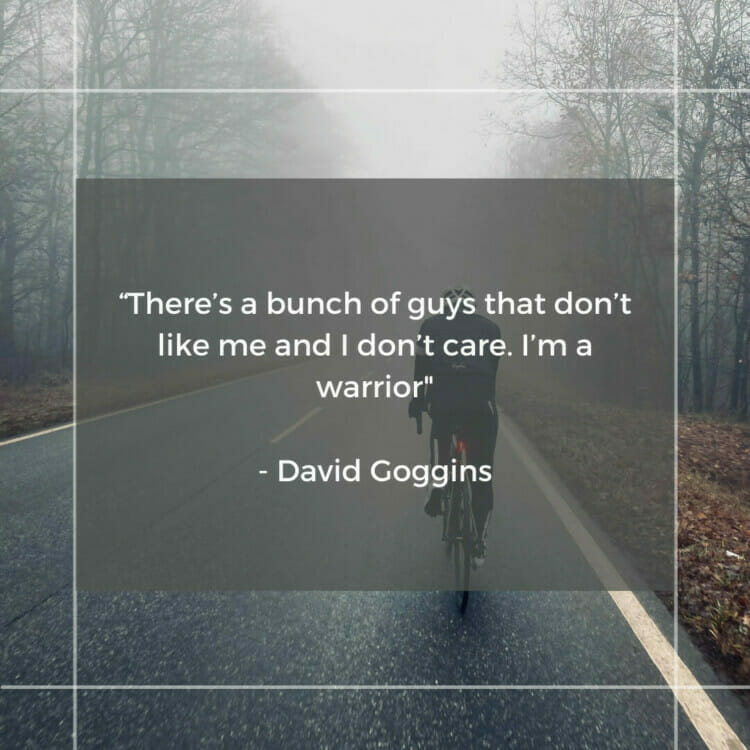 When you’re reaching for greatness you’ll find a lot of people along the way who are offended by it. It upsets them to see someone doing something they’re not brave enough to do, and will want to bring you down so they can feel better about themselves not even trying. Don’t let them. Know that’s it’s not really about you, but about what you represent for them. Show them they don’t need to dislike you, they can join you instead.

7. On where true confidence comes from 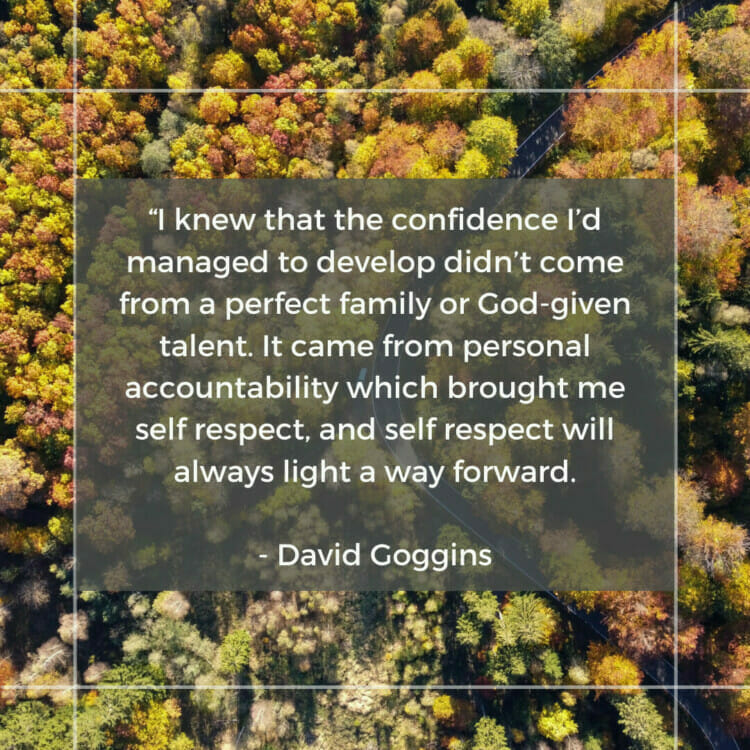 David Goggins quotes like this one summarize his being. There’s a lot of talk surrounding the concept of confidence. How important it is in your journey to success, and how much power it has in helping make you a happier person. But there’s less talk about how one can develop it. Goggins’ approach is to essentially make promises to yourself, and keep them. Accountability is your ability to build trust with yourself and follow through. Knowing you can do what you promise makes you feel confident in yourself!

8. On what the most important step is 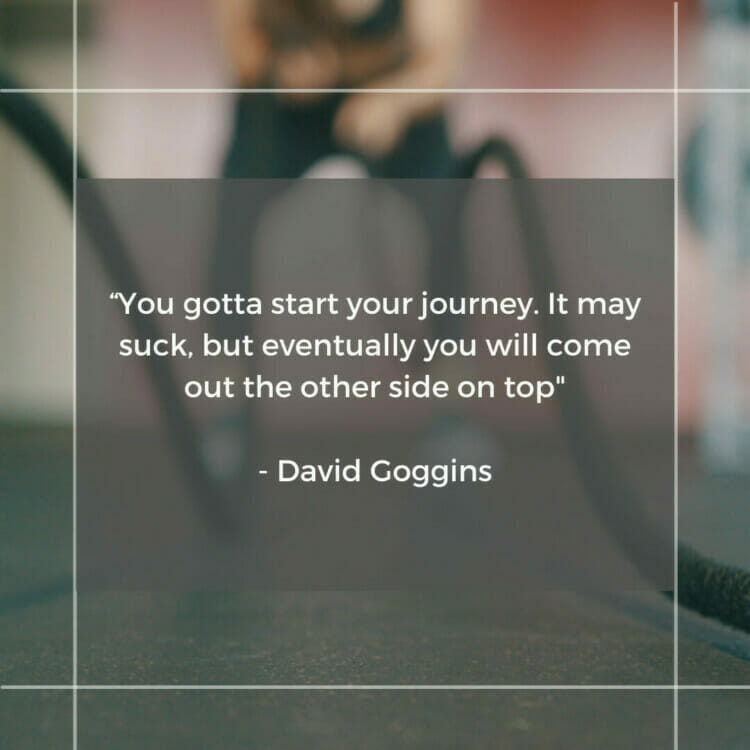 The journey of 1000 steps always starts with the first one. Everything will seem daunting if you just look at the big picture. It’ll be hard, and it’ll take a lot of time. But time is going to pass anyway whether you take action or not, so might as well try. Break the goal down into smaller goalposts. Once you’ve done that only focus on the first one. Then the second one. Next thing you know you’ll look back and you’ll be halfway there.

9. On how self-talk can shape your potential 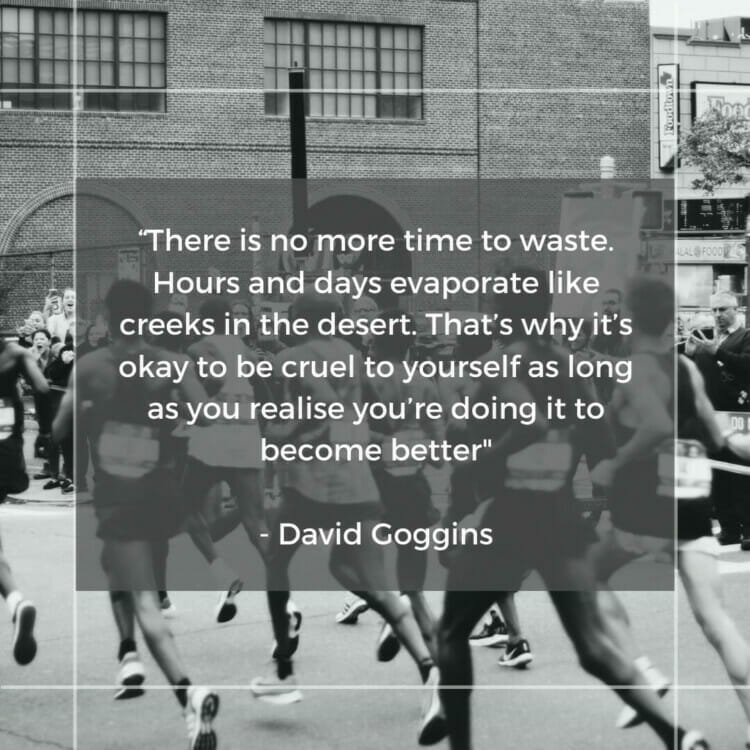 David Goggins quotes like this one remind us of the fickleness of time. The passage of time is something we all are aware of, but no one seems to want to take into account. Life will pass you by faster than you realize. So when you decide you want something don’t waste time hesitating. While being cruel to yourself might be a bit intense for some, you can also look at it from the point of view of being kind to yourself. When you use positive self-talk to help shape your potential you’ll find you’ve become unstoppable.

10. On challenging yourself every single day 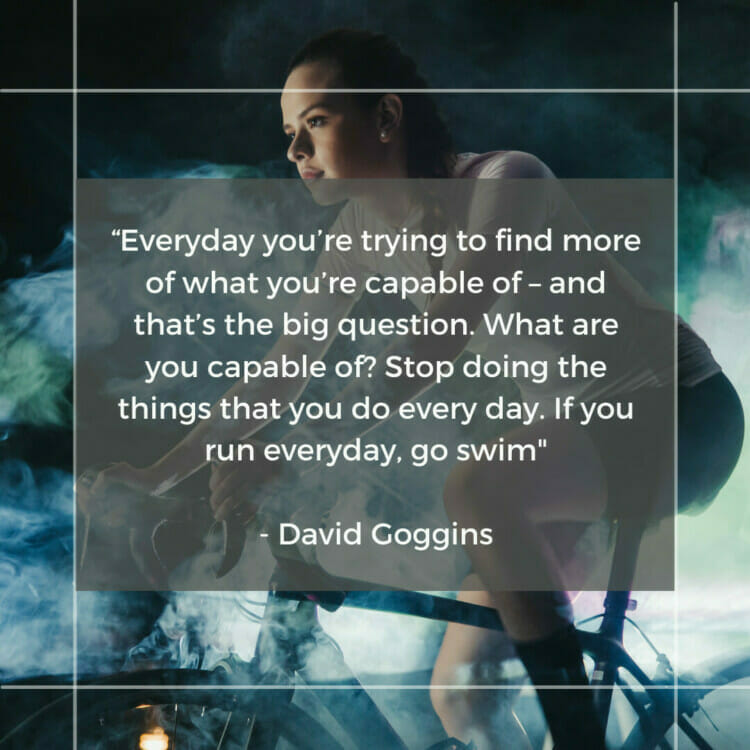 David Goggins quotes like this one remind us to keep seeking new challenges! If you find that thing you once couldn’t do now is something that comes easy, then it’s time to find another challenge. Constantly challenging yourself is how you’ll keep growing into your full potential every single day. As David states, if you used to struggle with running and now you have no trouble with it, maybe it’s time to consider adding swimming as a new skill.