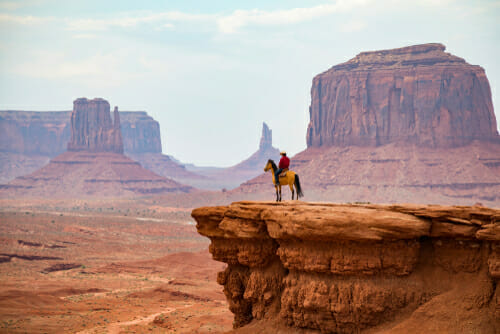 John Wayne is one of those names you probably think about when someone brings up old-school Hollywood movies. Particularly cowboy and war ones. So prolific was his career in film that by the time he retired he had acted in 179 movies – not bad for a little kid from Winterset, Iowa.

A sometimes controversial figure due to his political views on war and race, he was always a passionate patriot who loved the United States with every fiber of his being. The US government even recognized this passion and awarded him two of the highest civilian awards possible.

John Wayne is a man who lived his life his way. This means that the lessons he left behind are riddled with conviction, passion, and hard work. All things a true cowboy will always be proud to showcase.

Keep reading to find out our favourite John Wayne quotes to help unleash the cowboy in you. 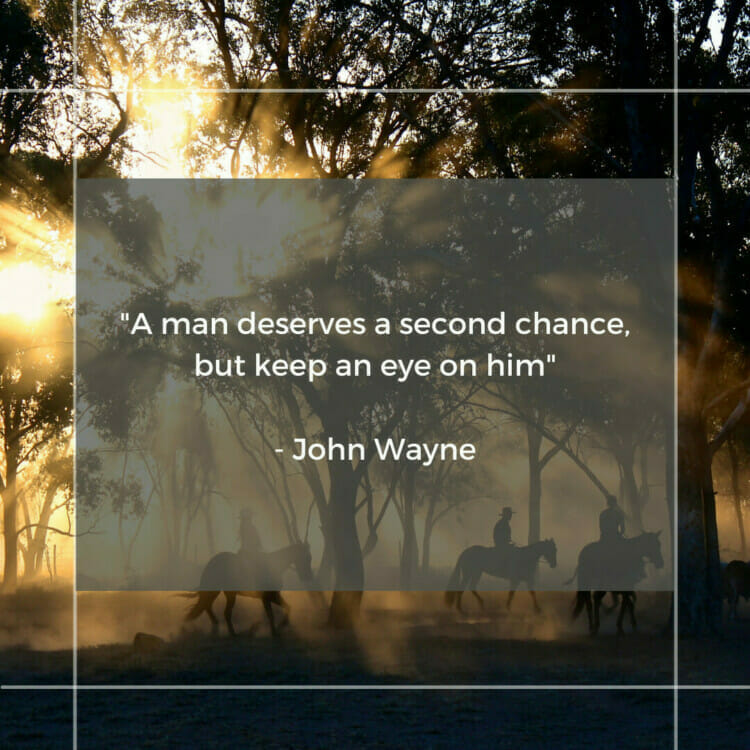 John Wayne quotes like this remind us that we should always give everyone a second chance. We never know what’s going on in someone’s personal life and the situation at hand might have just been an unintentional reaction to that. That said, it would be naive of you to simply let it slide. The secret lies in giving that second chance while making sure you are being more mindful of the other person’s action than you were the first time around.

2. On how someone else succeeding doesn’t mean you won’t 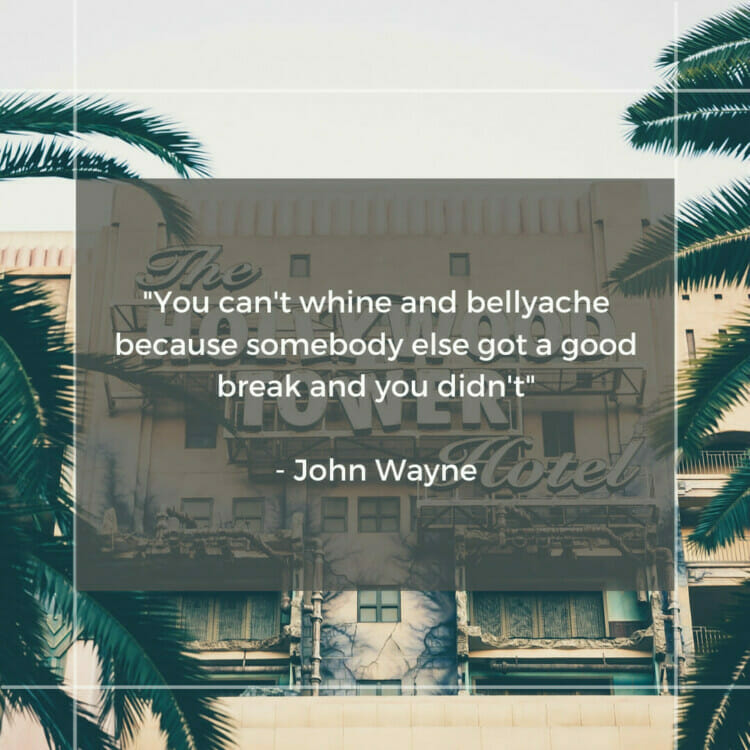 We’ve all been there before. A friend can retire early, or a coworker gets a promotion we didn’t even want and we’re sitting there drowning in jealousy. But what if we told you that them succeeding doesn’t mean you can’t? Not only that, but these things happening to them is actually beneficial to you. How? Because you can analyze their success to see what they’re doing right that you’re not, and then copy them if you want the same results. At the same time, John Wayne quotes like this remind us that sometimes the randomness of the universe is in your favour and other times it’s not.

3. On only caring about the opinion of those who truly love you 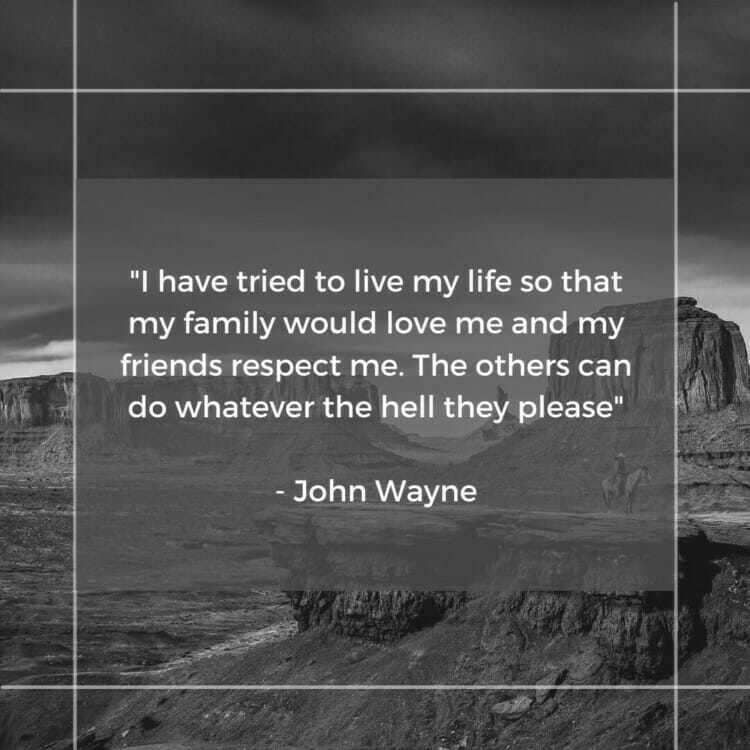 It’s common knowledge that everyone you ever meet will have some sort of opinion on you. And that some of them will also feel the need to share that opinion. Or their thoughts on the way you choose to live your life. But John Wayne quotes like this remind us that the only thoughts that matter are those coming from the people that love you – and the ones you love back. Your family, your friends, your mentors, and yourself. Everyone else? Irrelevant

4. On how to deal with failure 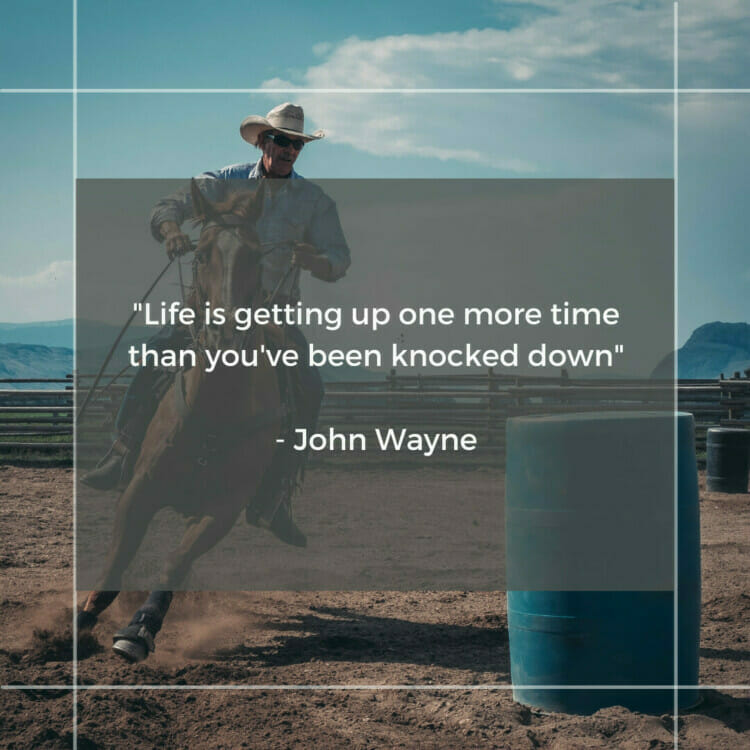 Every big figure in business, and even life, will have a version of this lesson. Failure is inevitable, you will never be able to go through any process without something going wrong. But if you allow every little setback to create a huge negative ripple effect you’ll never get to where you want to be. Focus on getting up, dusting yourself off, and then figuring out what you did wrong so that you don’t repeat it.

5. On how to deal with difficult situations 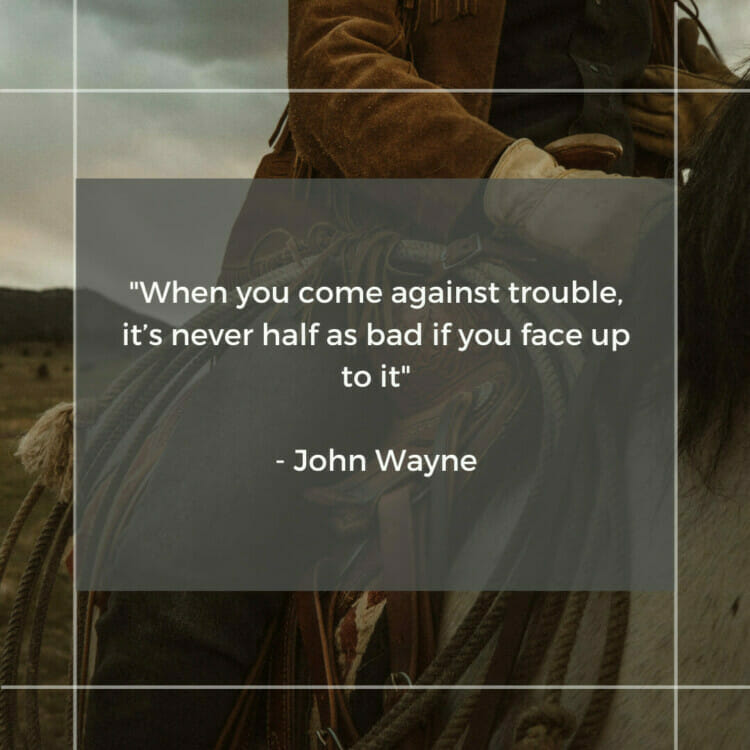 Turning away from hard conversations, problems, or situations will never make them go away. But facing them with the knowledge that it’s actually a positive thing can change your whole attitude about it. What do we mean by this? Moments that are out of our comfort zone or that we find hard are usually perfect opportunities for us to learn what to do. If you can figure out how to solve it just once, then you’ll have that knowledge saved for the next time this comes up again.

6. On the definition of bravery 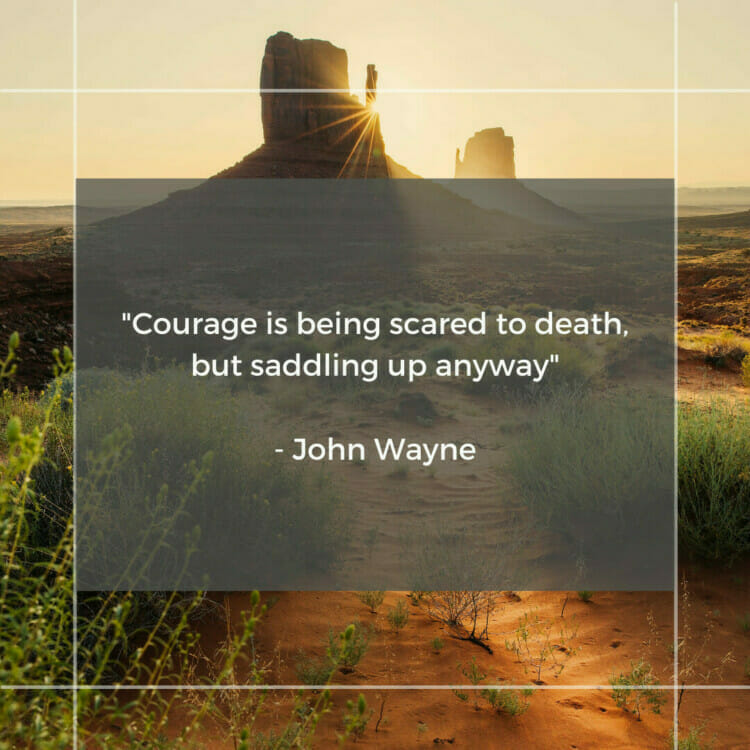 This goes hand in hand with another of his quotes “All battles are fought by scared men who’d rather be someplace else”. Bravery is not about not being scared at all. It’s about being terrified and doing it anyway. John Wayne quotes like this remind us that the bravest people are those who face their fears head-on, without letting that fear prevent them from doing what they want to.

7. On treating others how you’d like to be treated 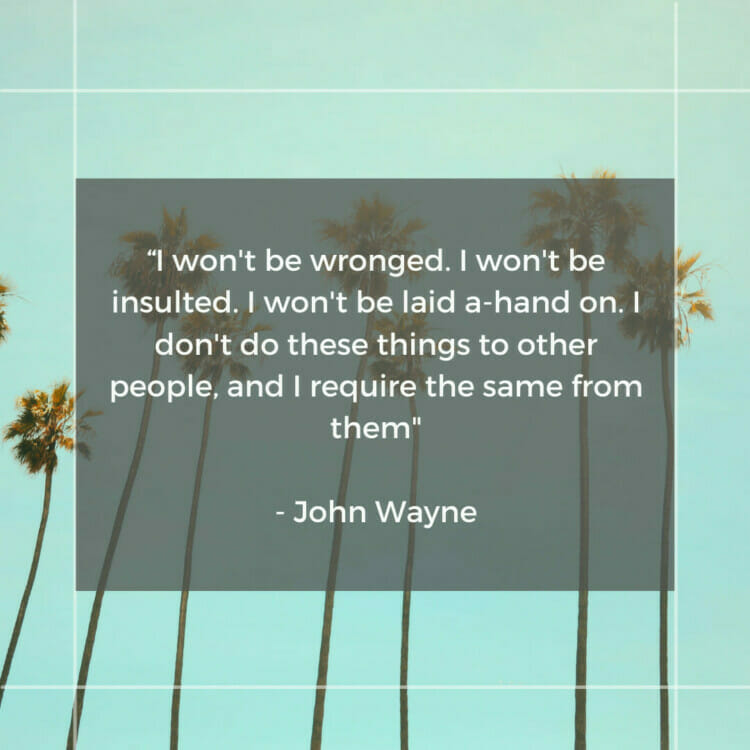 A universally accepted truth, you shouldn’t treat others how you wouldn’t want to be treated yourself. It boils down to ethics and basic human kindness, but essentially you should be leading by example on how you want to be treated. If people see you yelling at someone, then they’ll assume you’re ok with that and will have no problem yelling at you.

8. On the concept of life lessons 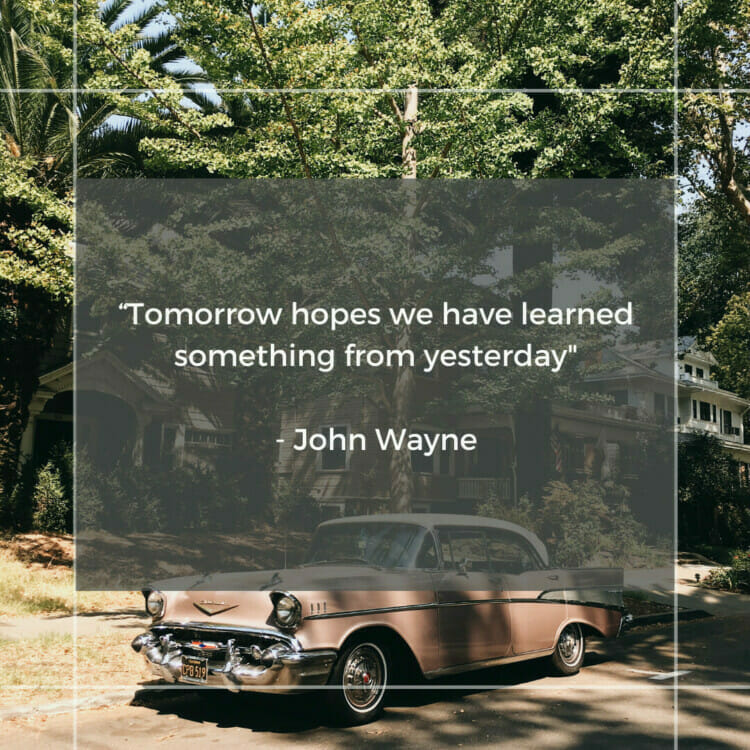 Our days are short and we already use a big chunk of it to deal with the necessary aspects of life. Eating, working, cleaning, socializing. If you want to be one step ahead of the masses, however, it’s important you find time to learn new things every day. It can be something as simple as reading a 10-minute article about investing, or something as complicated as taking a class at a local school. Whatever you choose, aim to learn something today you can take into your life tomorrow.

9. On thinking outside the box 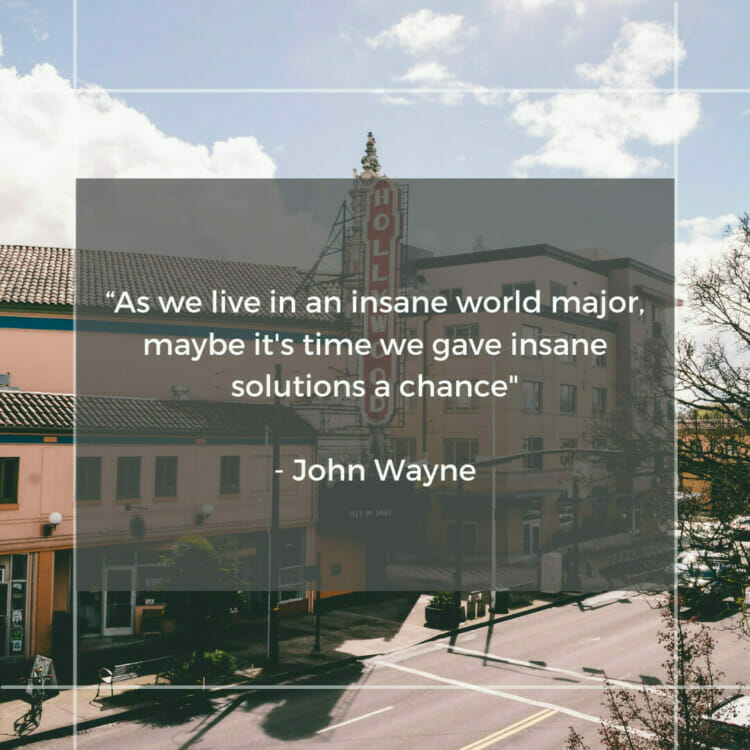 So, this quote is technically from one of his movie characters. But it spoke so much truth it was worth adding it in anyhow. We are mainly conditioned since we’re little that things need to be a certain way. You go to school, you get a job, you get married, buy a house, have children. But there are a million alternative ways of living out there you can chase as well. In this modern-day where crazy is the norm, maybe there’s something to be said about using that same crazy in how we choose to live.

10. On making sure you’re a lifelong student 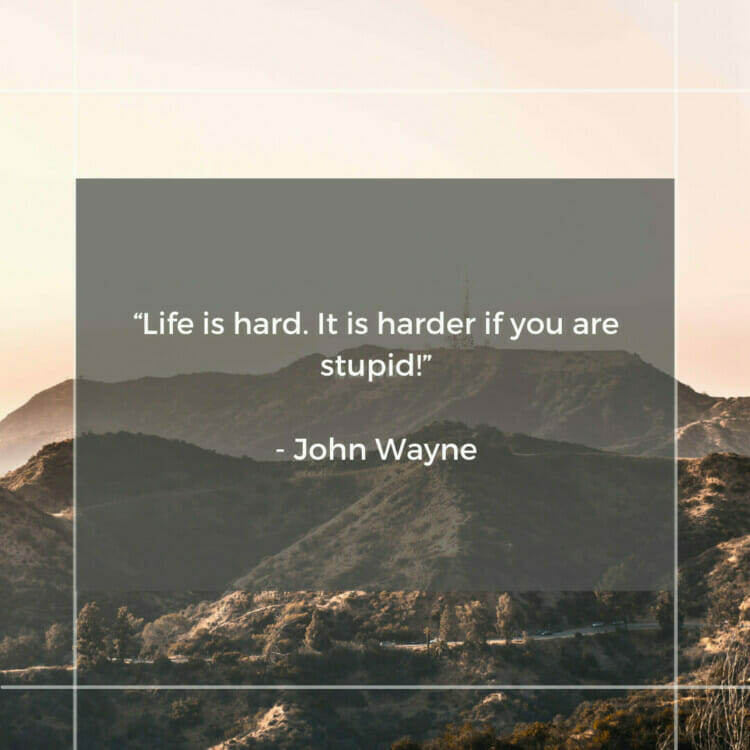 While you could argue that going through life without much intelligence could be a good thing (after all, ignorance can be bliss), you’re also missing out on a lot of easier ways to do things. Life is hard as it is, and navigating it without much logic or common sense will likely just make it harder. The best way to fix this? Learn common sense, and then practice it. The key is to learn how to not overanalyze and trust your gut.