10 Teddy Roosevelt Quotes to Motivate You to Move Forward 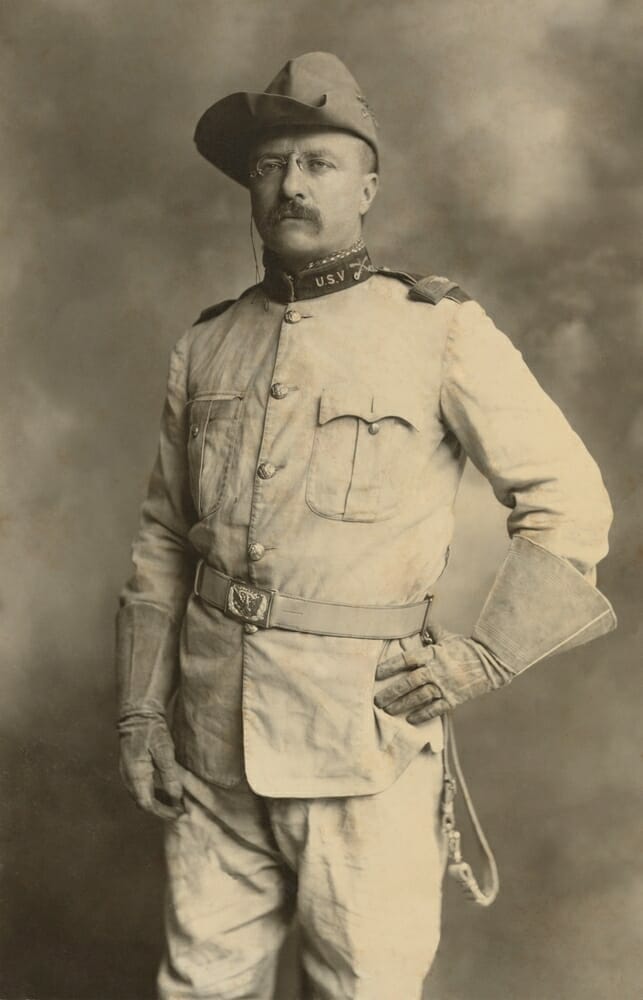 Theodore Roosevelt was the youngest person to ever take office as the President Of The United States. At 43 years old, however, he was no young one in terms of how much life he’d lived. His convictions towards equality regardless of your positioning in society, and fairness when it came to regulations and laws, was something he’d be fighting towards most of his adult life. So impactful were his policies that he ended up winning a Nobel Peace Prize in 1906. He fought for the US to move forward both politically and socially until his dying breath. And so, we wanted to share 10 of the most impactful Teddy Roosevelt quotes to help you move forward in your life as well.

1. On the power of your own convictions 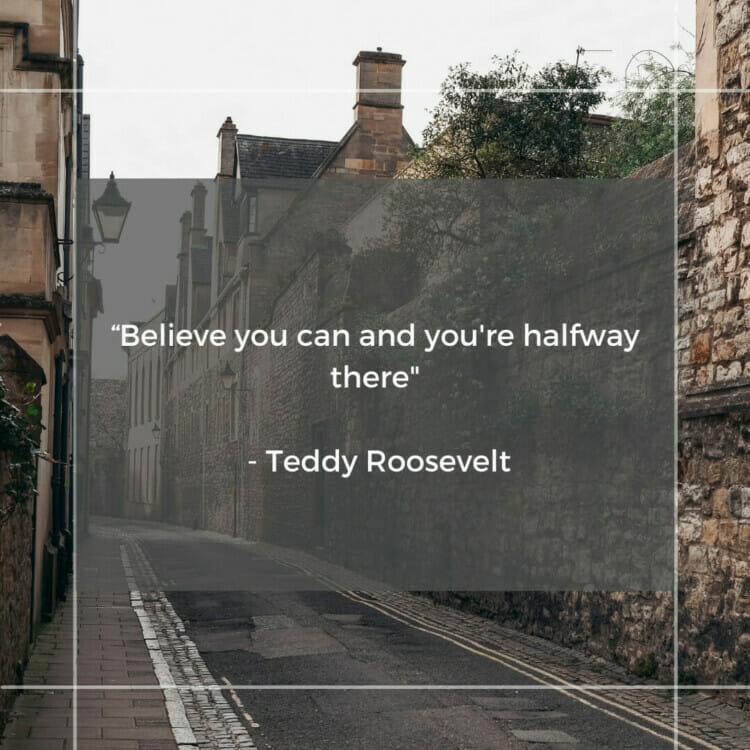 Teddy Roosevelt quotes like this one remind us that the most powerful thing on this earth is the human mind. If you think about it, everything you touch and everything you see that’s not naturally found in nature is something a person just like one once created in their mind. But the sad truth is that most of us aren’t even aware of how little there really is in between us today and us achieving our dreams tomorrow. Your own convictions, the sheer confidence that you can do that hard thing, is truly half the battle. Taking the steps to reach it is just the other half.

2. On the satisfaction of knowing you tried your best 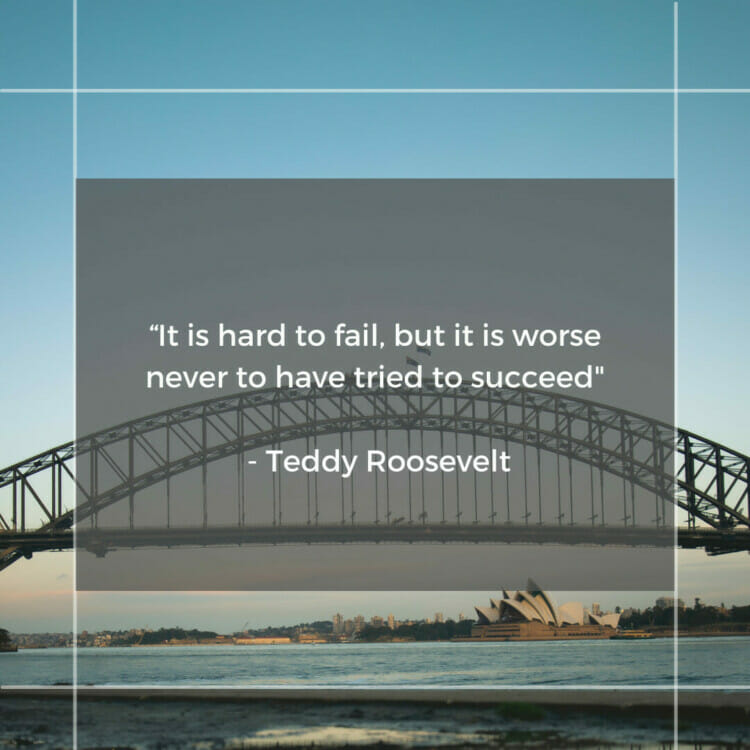 Regrets can be a sad feeling to experience. Even more so when you know deep down it was because you were simply too afraid to fail that you never even tried. Failing itself is an inevitable part of life. Short of living in a bubble underground and never interacting with another living thing, you’re going to eventually fail at something. But if you can learn to take that failing as something positive (for example, the fact that you know now what not to do the next time you’re faced with the same issue), and go for it anyway, you’ll find your regrets are few and far between.

3. On the true meaning of bravery 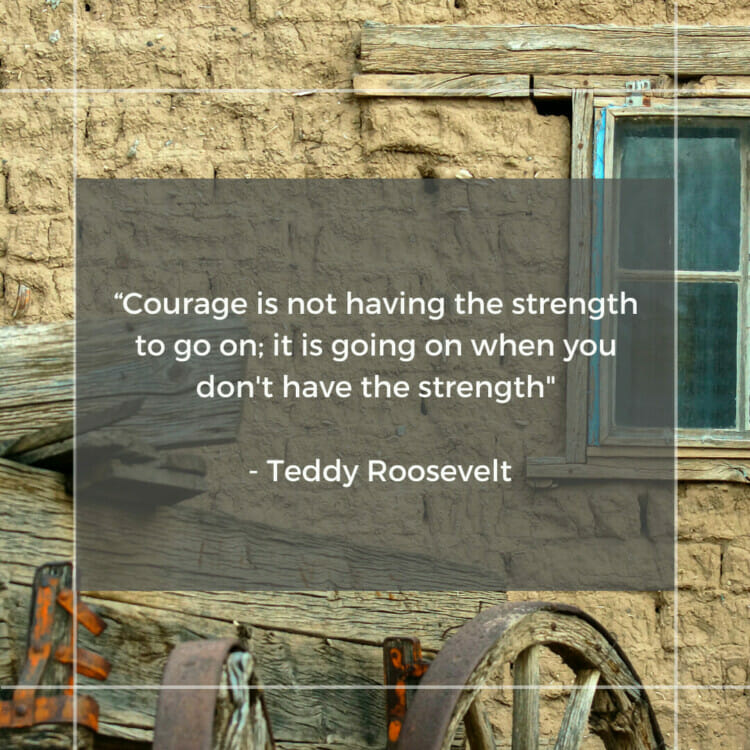 Teddy Roosevelt quotes like this remind us of the importance of perseverance. It’s easy to be brave when you’re not really scared. But it’s the person who takes a step forward even though their fear that’s a truly courageous human. Even more than that, if after you’re been knocked down, again and again, you’re filled with fear, and yet you still get up and keep trying? Now, that’s the best representation of bravery you’ll ever experience in your life.

4. On how books mold your character 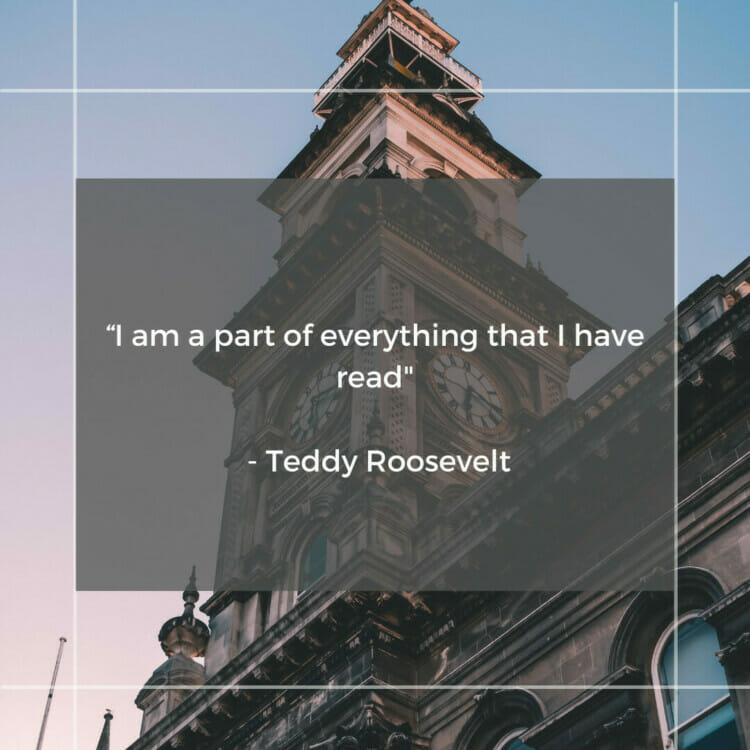 Teddy Roosevelt quotes like this remind us that we are a collection of our experiences and acquired knowledge. This is a very poetic way for Teddy to explain how important knowledge can be for your personal development. And while he’s mentioning books, this education can come in almost any shape and form. From talking to a stranger to learning in class, to subscribing to a daily newspaper app. Taking some time to learn something new every day, no matter how small, can do wonders for your ability to think critically and creatively. After all, you are the sum of all the things you’ve ever learned.

5. On how lack of action can play against you 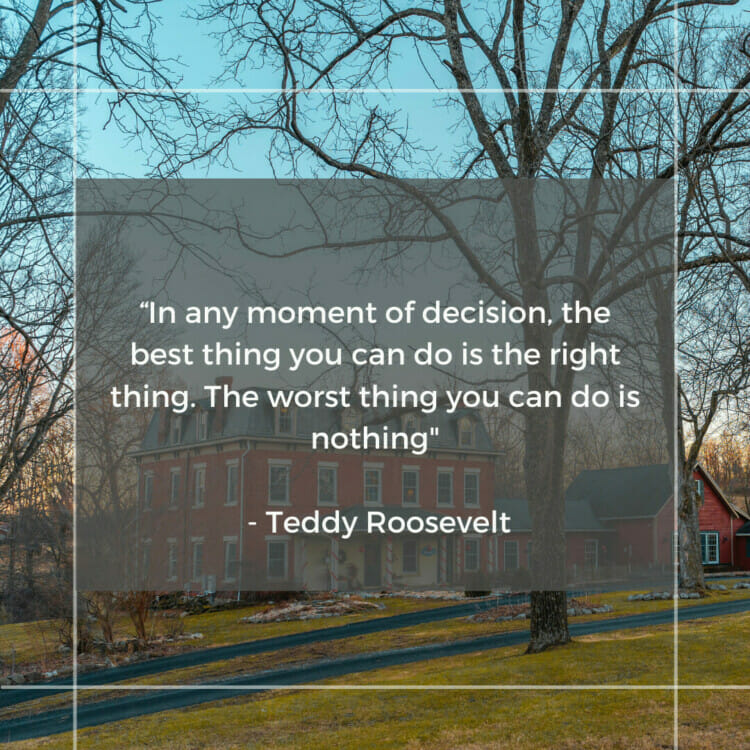 Many times in life we find ourselves faced with difficult choices – big or small. Some people will analyze every aspect before making a decision on how to proceed. Others will close their eyes, choose a path, and then just go for it. And others might simply freeze up. As hard as it might be, it’s important to understand that in the end, any choice you take is better than not choosing at all. Don’t let inaction interfere with your ability to reach your goals.

Want to take action and start achieving your goals today? Take our free course on Building Your Personal Annual Plan!

6. On faking it until you make it

It looks like “fake it ‘till you make it” has been around for longer than most of us had realized! Even Teddy Roosevelt, a man known as the youngest president of the United States, seems to be of the camp of “just give it a shot!”. Everyone has to start somewhere, and realistically, you’re probably more capable than you think you are in the first place. Next time you’re faced with a task you’re not 100% sure you can do, but feel you might know a bit about, go towards it full speed. Nothing like a little sink or swim moment to show you what you’re really made of.

7. On trying to understand that everyone is a world on their own 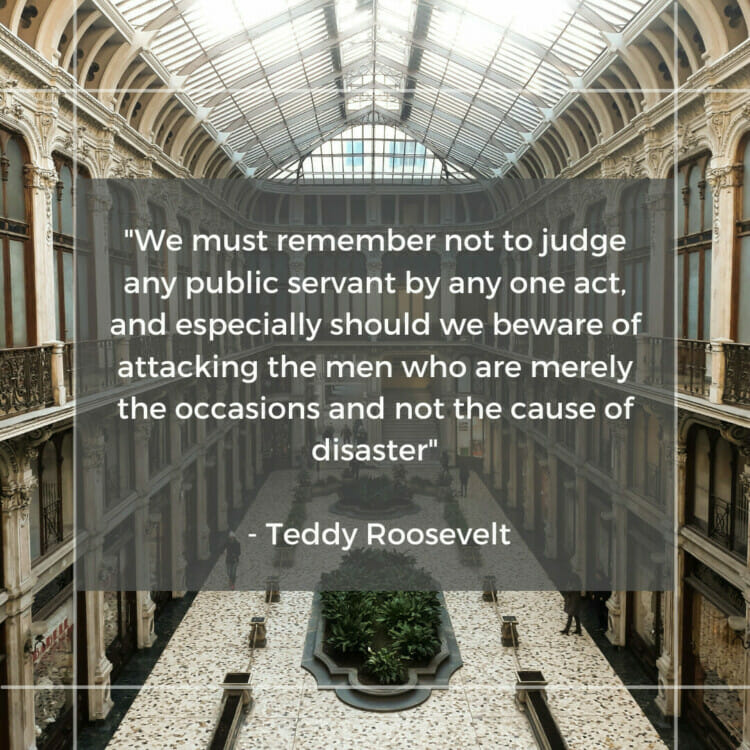 Teddy is speaking a big truth here when he essentially advises us to never judge others for only the actions we can see, as we never know what brought them to that moment. Behind the single action, you’re witnessing could be a struggling person doing the best they can. Whether that means they’ve had no support from their superiors, or are struggling emotionally. If you would like people to have some compassion towards you, then you should offer the same to everyone else.

8. On how luck plays a bigger role than we care to admit 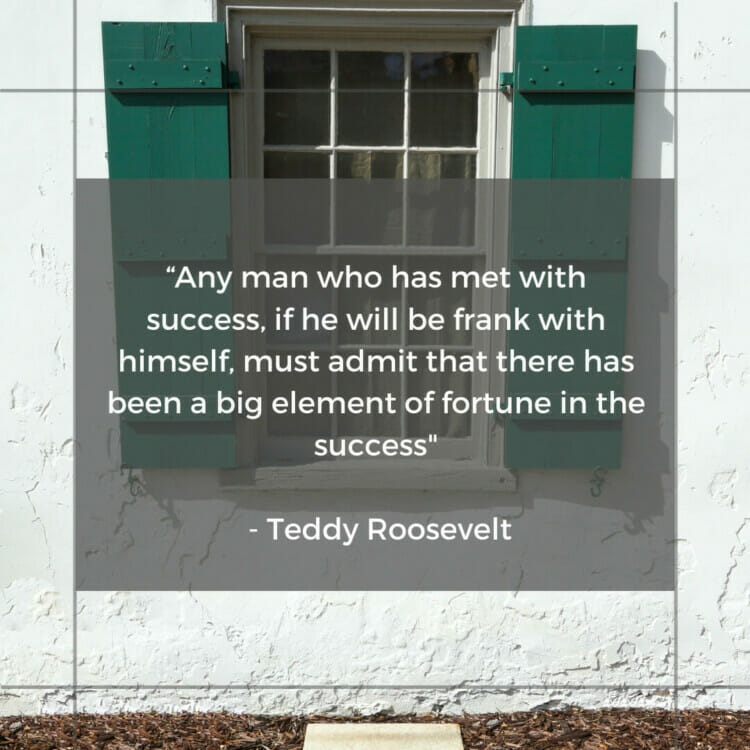 Hard work is incredibly important when it comes to achieving your goals. No one would argue against that. But it’s also important to recognize that those that made it big had a great deal of help (or luck) on their side. In 2020 for example, a little over 25% of the world’s billionaires weren’t actually fully self-made. They had a jump start based on their existing inheritance. So, the next time you’re comparing yourself, remember that even they probably didn’t get there alone.

9. On what a leader truly is 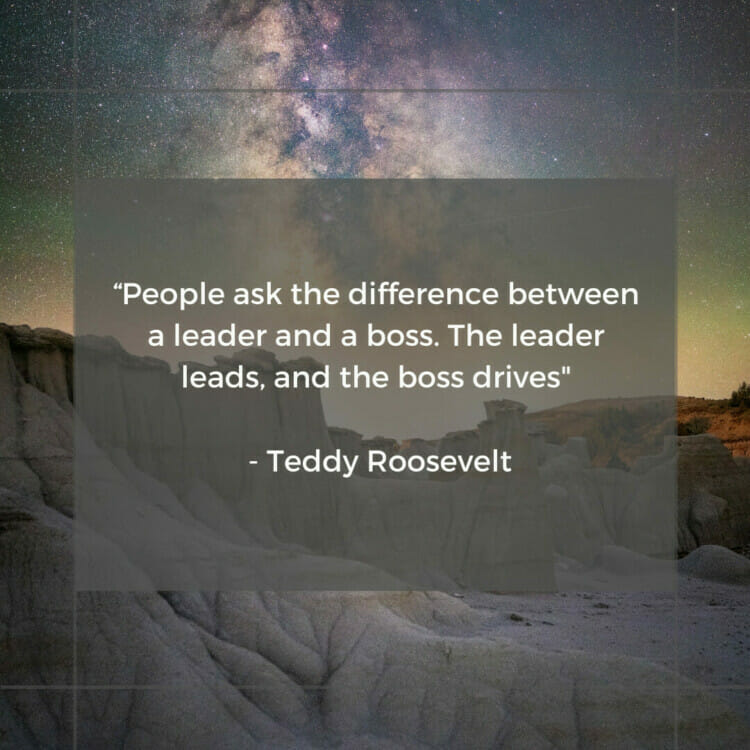 A true leader will inspire their team. They’ll motivate them to work alongside them in order to reach the end goal. They’ll be in the trenches right with them to make sure they feel supported and helped. A boss on the other hand will simply tell you want to do and then step away, leaving you to figure out the issues that may come up on your own. One will make you feel seen, the other will not.

10. On being yourself always 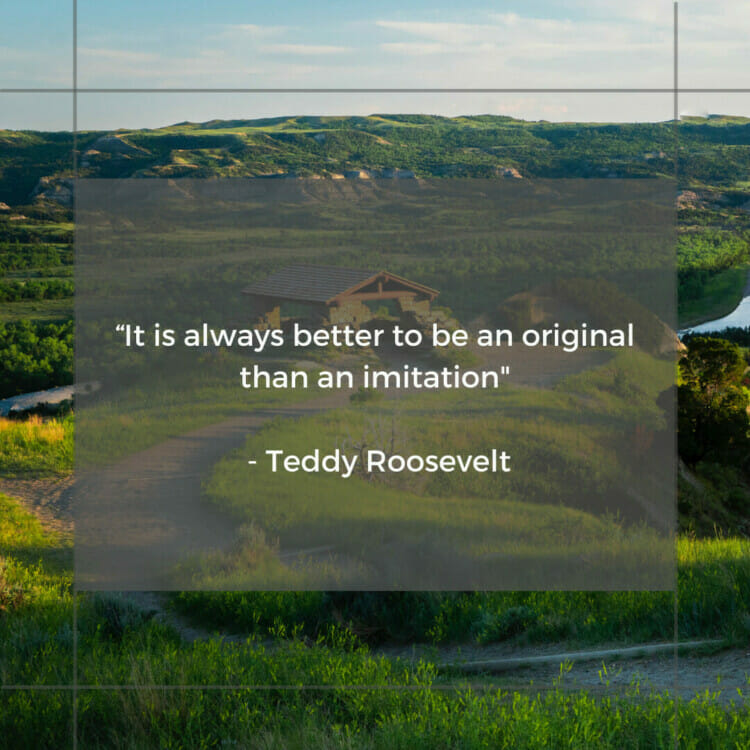 The one thing that will always set you apart from everyone else, is that you are the only version of yourself there will ever exist. Your thoughts, your point of view, and the way you problem solve are uniquely yours. Don’t try to copy what others are doing, instead spend time learning who you are and how that can help you get where you want to be.