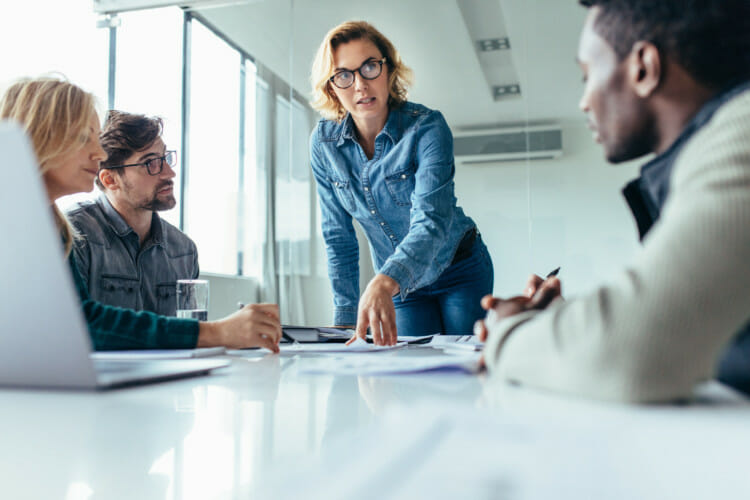 I have had more than one client refer to their business team as a “family.” It’s true, too, and in more ways than one. As a parent of four kids, I can tell you that business co-workers and family members behave similarly in many essential ways, such as tattling on each other, fighting over toys, getting into various spats that flare, die to embers, and then flare again, griping over unfair workloads, leaving jobs half done, and causing parents untold worry and consternation.

Business teams can also mirror families in positive ways. They are capable of pulling together against a common threat, sharing laughter and camaraderie, learning to have grace for personality differences, and causing parents to feel deeply rewarded as they mature, grow, and learn to work together.

Like parenting, leadership isn’t for everyone; but if it’s the game you’ve chosen, these eight lessons apply directly from one to the other.

1. Rules without (a proper) relationship leads to rebellion

This is true, provided the word proper is inserted. Any wise parent knows that laying down the law to children outside of a context of a trusting relationship doesn’t work; it only makes children bitter and rebellious.

These same parents know that their goal is to have strong relationships with their children based on mutual respect and boundaries, not to try to build peer-to-peer relationships. You don’t confide in your child about your grown-up problems. You both have age-appropriate friendships. Your child doesn’t look to you as her prime source of friendship, nor do you look to her for that.

The same is true with the employee-employer relationship. Your employee has lots of co-workers, but only one boss. You actually get rebellion when you delve too deeply into an employee’s personal life and then try to introduce rules.

Your job is to be first among equals, and to find your close friendships elsewhere. The day may come when your employee (like your growing child) moves through the ranks and becomes your equal in role, and then, of course, the nature of your relationship will change, too. The essential question to ask yourself is, “Am I too close to this person to be able to call out their bad behaviour?” If the thought of it makes you squirm, you may be getting too close.

2. There is a big difference between power and authority

Many times I have had to use power when parenting my kids. “No, I’m sorry, there’s no more screen time today,” or, “No, sorry, you can’t go to that person’s house for a sleepover.” They want it. I don’t want them to have it, and I exercise my power to force them to do what I want. Lots of employers use only this one leadership tool—power. It’s a useful tool, without a doubt, but power only represents half the story of how effective leaders operate.

A culture of power produces artificial harmony. It’s pretend, and everyone knows it, except the dictator. Because people are afraid to disagree publicly, they do so secretly.

That’s how raw power tends to work. It can make things happen quickly, but power alone doesn’t build loyalty or positive culture or affect permanent change in people. The value of power ends the day you are no longer in a position to force people to carry out your will.

Here are the essential differences between power and authority:

Power helps build the culture you want when that power is seasoned with authority. Authority flows from respect.

3. Have a few rules, and stick to them

In our house, just like in yours, we couldn’t possibly have rules for everything. But there are a few things that are non-negotiable. When those really important rules are violated, we, as parents, take action. If we don’t, our family culture will start to erode and eventually spin out of control. One of of our rules is:

Your rules may be different than ours. They may be written down, or they may be unspoken. The point is that there are many things these rules don’t directly cover. But when we stay consistent to these few rules, the family knows what’s expected, and knows what boundaries not to violate.

In a company, these rules are called many things: core values, guiding principles, pillars of success, rules of engagement, guide posts. It doesn’t matter what you call them, it matters that you communicate them and make them live in your organization.

Healthy families have boundaries that clearly establish what is and what isn’t acceptable, and these boundaries need to be consistently enforced. When one member of the family is punished for a right attitudes violation but another gets away with doing the same, it hurts everyone, including the one who violates with impunity.

In a business context, when some people are allowed to violate rules with impunity, they, and others around them, get bolder. Soon the stated right attitudes become meaningless. Consistency is key.

The main desired outcome of the authoritarian family is obedience and respect. Kid’s lives are laid out for them. These homes are characterized by raised voices and displays of anger. This combination of micro-management and harsh treatment tends to embitter the children, and they often grow into rebellious teenagers who engage in unhealthy behaviours.

In some cases, the kids come to their senses somewhere in their twenties, and families are re-united. In others, rebellious teenagers grow into rebellious adults and never really recover. Ironically, while these parents achieve obedience for a time, they never really earn the respect they seek.

In this family, any kind of behaviour is okay, just as long as the parents felt liked by their kids and are viewed as “cool.” Teenagers in these families might be granted parental approval to engage in dangerous and/or illegal activities, like experimenting with sex, drugs, and alcohol.

These children often spin out of control as they come into their teen years, because even teenagers want to know where their boundaries are. These kids tend to engage in all manner of unhealthy behaviours, and sometimes emerge with significant, life-long consequences as a result, including addictions, failed relationships, and surprise children of their own.

If you have something negative to say to your child, never write it down. When he has it in writing, he can keep it for the rest of his life and go over it again and again. He can revisit his grievances and hurts, and remind himself why the remarks were unwarranted or unfair.

When you praise, do it in writing. Written praise is very powerful, because your child and can go back to it again and again and be reminded of good qualities and the support and love that he has around him.

The same is true in business.

7. Start with people where they are, not where you want them to be

When someone is new to a job, expect them to take a full year to really catch on (depending on the job). If they’re at 60 percent within six months, they’re probably doing okay. Take a breath and remember all the hours you had to devote to get where you’re at today. Exercise some patience and become a mentor to someone where they are.

8. Set the right tone and everything else will take care of itself

When you have a young child, you need to establish the right tone. This may require some discipline in the beginning, but once you’ve built the proper boundaried relationship, established your rules, and shown consistency in enforcing them and making them “live” in your family, the rest is easy. You don’t have to punish your child very often, because she feels secure in her home. She knows what the rules are and how she should behave.

This works precisely the same way in your company.