Whether in your career or personal relationships, it is important to be mindful of how you are portraying yourself to others. We don’t always get to collaborate with people who have mastered the nuances of communication in the workplace, but we do have control of our own actions and behavior. Recognizing when you may be crossing the line into patronizing behavior will allow for you to maintain more positive relationships and stronger collaboration as mutual trust and respect produces willing cooperation.

What Does “Patronizing” Mean?

Patronizing is the act of appearing kind or helpful but internally feeling superior to others. You should avoid acting in this way since it makes others feel like you look down on them. Patronizing behavior is a subtle form of bullying and can take many forms in the workplace. Take a look at the following examples of Patronizing behavior and check yourself to see if you fall into any of these traps.

Even though you may just be excited to add some value to the conversation, interrupting people frequently is often viewed as patronizing. This is because when you interrupt someone, the message you are sending out is “What I have to say is more important than what you have to say.” This leaves the other person feeling unimportant and like their voice doesn’t matter.

Another variation of this could be interrupting people to correct their pronunciation. This is patronizing since you don’t allow the person to finish their thought. You totally dismiss the value of what they are trying to communicate and instead make them self-conscious about how they pronounced a word.

2. Telling Someone that they Always or Never do Something

Saying things like “You always make that mistake” or “You never do things properly” is extremely patronizing. It makes the other person feel like a complete failure and by putting them down like that, they are actually more likely to act in that way. This is proven by the pygmalion effect.

Instead of making people feel like they are fundamentally flawed, try to ask questions to better understand why things don’t get done to your expectations. Coach your employees, coworkers, and friends by asking questions and helping them to get to where they want, instead of scolding them.

Take the free preview of our Coaching Based Performance Reviews course to better understand how to coach someone instead of offering patronizing advice.

3. Telling Someone to “Calm Down”

By telling someone to “calm down”, “take it easy”, or “relax!” are all forms of patronizing language.  If you repeatedly tell coworkers to “calm down” and never offer them a real solution to fix their problem, then all you’re really telling them is “keep being upset because I’m not going to help you solve that problem, but just don’t express that you’re upset.” This makes the other person feel like their feelings are invalid and confuses them into thinking that they should keep things bottled up when talking to you; thus stopping effective communication from taking place.

4. Using the “Feedback sandwich” format too much!

Made popular by Dale Carnegie’s How to Win Friends and Influence People, this format goes like this: give a compliment, tell them what you want them to fix, give another compliment. This format is patronizing since it assumes that the other person has the emotional intelligence of an ape. It assumes that if you tell the person exactly what you want them to do, they will get upset. Which is exactly the opposite of the truth.

Most of the time, people want to hear exactly how they can improve and are annoyed that you feel like you have to lessen the blow. For an in-depth guide to giving feedback and delegating tasks take our free course preview here!

Nicknames like “big guy” and “chief” are seen as patronizing. This is because even though you are “complimenting” the person, what you’re actually doing is belittling them by exaggerating the magnitude of their role.

Nicknames like “hun” and “sweetie” are also patronizing, but in a different way. When you call someone by these nicknames you are actually minimizing them and downplaying their intelligence. This is because these nicknames are usually reserved for children.

How to Recognize and Change Patronizing Behavior

1. Be Mindful that your Body Language is not Patronizing

Looking down on people is an instant way for you to be disliked or make people feel inferior to you. Studies suggest that 75 to 90% of what we say is nonverbal. Therefore, it is incredible important to monitor your body language for the nonverbal cues you are giving off (Su, 2013). Keep your head and chin level and avoid impatient body language, such as loud sighs, eye-rolling, constantly looking at your watch or your phone, drumming your fingers, or yawning. Maintaining eye contact when someone is talking is a great way to make sure that you are portraying a manner of respect rather than patronizing tendencies. 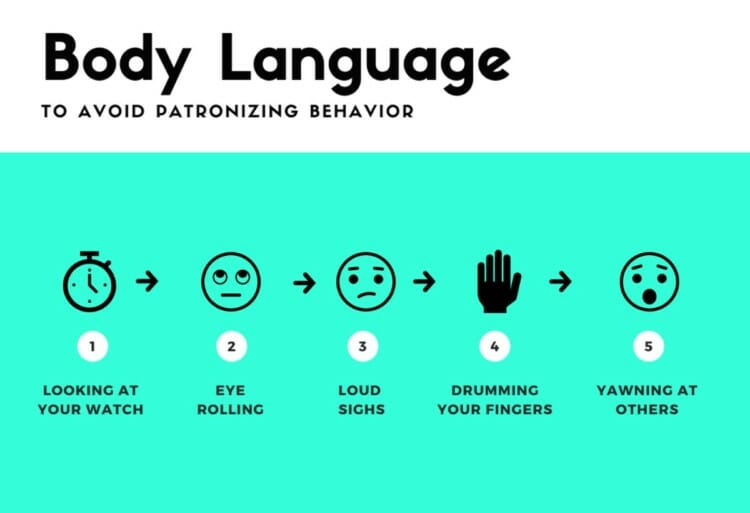 Being mindful of your words can make a huge difference on how you come across. Check your vocabulary – how often are you using ‘actually’ and ‘just’ in the workplace? The use of ‘actually’ implies that you were surprised that your coworker actually came up with a good idea. Definitely not the best way to foster a collaborative work environment.

As fun as Tuesday night trivia is, no one likes a real-life Trivia King. When you know everything, it can come across very one sided in conversation and like you know it all. Listen to what other’s have to say and ask for their input. This promotes teamwork and a sense of comradery.

Another persona to avoid is the steamroller. It is great to be able to maintain a lively conversation with anyone in the office, but it is another thing to have a one-sided conversation and stopping others from chiming in. Whether it’s in a team meeting or a one-on-one conversation being a conversational steamroller sends the message that whatever you have to say as far more important than what other people have to contribute. This will make people not want to work with you and will leave you struggling to get projects off of the ground as you will be forced to rely solely on your own skillset.

One of the most repeated patronizing behaviors arises when a friend or co-worker discusses their problems with you. This sensitive topic can open up a couple of different patronizing behaviors. The first is when you “can’t relate.” When someone chooses to discuss sensitive information with you, especially a heart-wrenching issue. The last thing you want to say is, “Well, that’s never happened to me, …”. In these moments it is important to show compassion and sympathy. You can do this by trying to find some kind of experience to make them feel understood and not isolated.

Another patronizing behavior that can arise from this situation is when you try to one up their problem or give unsolicited advice. It is important to ask permission to supply your friend or coworker with advice because you do not want to be forcing your opinions on them. Asking to supply the advice will give them the option to say no and, if they say yes, more likely to take your suggestion. On the contrary, if you attempt to equate your own experiences to the problem that they are facing–particularly when they aren’t at all relevant to your colleague’s situation–you will always come off as condescending.

A study done by Sarah J. Gervais & Theresa K. Vescio analyzed the effect of patronizing behavior and control on men and women’s performance in the workplace. They found that “men and women could be patronized with less damaging effects if the features of the situation were changed” (Gervais, 2012). By being mindful of other people’s experiences you can create a healthier environment for you and your colleagues.

The Gervais & Vescio study found patronizing behavior was particularly damaging when it came from a male leader in a masculine domain. if this sounds like your workplace, it is important to “consider having employees receive feedback from multiple leaders”. The study goes on to say, “Knowing that multiple leaders would be making decisions may help women to maintain control” (Gervais, 2012). Offering staff more than one leader to talk to can help eliminate patronizing behavior and produce a healthier, more collaborative environment.

The Institute for Safe Medical Practices warns that disrespectful behavior has been known to “chill communication and collaboration”. Moreover, it also “undercuts individual contributions, undermine staff morale, and cause some to abandon their profession”. When patronizing behaviors are present a person’s ability to think clearly, make sound judgments, and speak up is diminished. If not addressed and thwarted businesses will have an increased turnover rate,

Moreover, “disrespect causes the recipient to experience fear, anger, shame… and a whole host of physical ailments”. These negative attributes could become hazardous in the work place, especially for those who work in dangerous environments.

People act patronizing for different reasons, but usually it boils down to insecurity and/or arrogance. After reading through this article hopefully you become more aware of when you are exhibiting patronizing behavior. Everyone knows what it’s like to be around someone who is condescending. Do the rest of the organization a favor and actively work to not be that person. Help your company foster a positive space for collaboration and communication by following our tips!

“Disrespectful Behaviors: Their Impact, Why They Arise and Persist, and How to Address Them (Part II).” Institute For Safe Medication Practices, 24 Apr. 2014, www.ismp.org/resources/disrespectful-behaviors-their-impact-why-they-arise-and-persist-and-how-address-them-part.