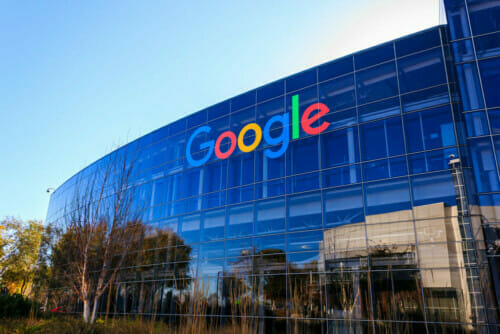 Google is a search engine turned global technology company that reigns as one of the largest technology companies in the world. It runs the top search engine in the world and is a subsidiary of its parent company, Alphabet Inc. Google is widely recognized as the company that revolutionized web search – when the world wide web was emerging, Google’s simple design beat out incumbents, Yahoo and Excite. Today, Google generates more than 80% of the world’s web search traffic.

Prior to 2015, Google Inc. was a publicly traded company listed on the NASDAQ. In 2015, the company restructured and formed a new parent company, Alphabet Inc. During this time, Google became a subsidiary to Alphabet Inc., along side other companies, such as Nest, Calico, and X Development. Alphabet Inc. is one of the largest technology companies in the world by market capitalization.

The search engine giant started with a fateful friendship between Larry Page and Sergey Brin. Page was on his way into Stanford’s computing science graduate program after studying engineering at University of Michigan. Brin was already at Stanford. While deciding whether to attend the grad school, he was giving campus tours to incoming students. It is through a campus tour that the two met and discovered their shared fascination with the world wide web.[1]

In 1995, the founders launched the first iteration of the search engine, which they called BackRub. It was merger between founders’ talents in mathematics and computing science that led to the powerful PageRank algorithm that crawled the web and ranked search results based on linking.[2]

After a $100,000 investment from another technology giant, Sun cofounder Andy Bechtolsheim, the company Google Inc. was born. The founders moved out of their dorm rooms to Susan Wojcicki’s garage in Menlo Park, California (Wojcicki would go on to be Google’s 16th employee and the CEO of YouTube).

By 2001, Brin and Page recognized that their rapid growth required experienced guidance from a seasoned tech leader. They recruit Eric Schimidt, previous CTO of Sun. Schmidt was brought in to provide what is fondly remembered as “adult supervision.” He took the company public in 2004 and would retire from his tenure in 2011, leaving Page to take the reigns. Page helmed Google until 2015, when the company restructured and appointed current day CEO, Sundar Pichai.

Over the years, Google’s products have revolutionized how we interact with the Internet. Beyond their search engine, they’ve created and acquired multiple products that have been both big hits and flops.

Gmail, introduced April 1, 2004, was the first email service that provided customers with 1GB of storage. This was seen as a near joke at the time because competitors, such as Hotmail and Yahoo, only provided megabytes of storage. Today, Gmail is the standard email that many use. In October 2006, they acquired YouTube for $1.65B. Youtube is arguably one of the most transformative platforms on the internet, opening the doors to content creators world wide. In 2008, they launched the Chrome browser, which is touted to power up to 60% of the globe’s web usage. [3]

Despite many hit products, Google is not immune to failure. Over the years, there have been a number of Google products which have flopped. One of their most notable failures is with Google Hangouts, which was competing social media site to Facebook and Twitter. Additionally, Google Glass, which made splashy attempts into consumer electronics, still has yet to gain traction with its target audience.

Perks of working at Google

The life and luxury of working at Google, and in particular, Googleplex, are widely captured in media. In fact, in 2013, Hollywood went as far as to make a movie, The Internship, about the perks at working at a company like Google. From free meals to overnight ski trips in Vermont, the company provides some serious and highly competitive perks that are hard to find in other organizations. Additionally, there are automatic esteem and bragging rights for being able to work at

Despite the perks, some have been critical of some of the workplace design decisions that Silicon Valley titans, like Google, have made. Some argue that such perks are designed to keep people at work for longer hours, destroying any chance of work life balance. Their free meals at all times of the day also also impact the local economy. Instead of employees spending their disposable income at local restaurants, they eat within Google’s compound.

FAANG is an acronym that represents the five companies that are seen as “Big Tech”. They include Meta (formerly Facebook), Apple, Amazon, Netflix, and Google. While they broadly fall into the technology sector, each company offers a series of products and services that cater to a wide range of customers and businesses.

These five companies are famous for being some of the best performing organizations in their sector. Each company has outperformed the S&P 500 since March 2009. Cumulatively, they account for a third of the Nasdaq 100 Index. Additionally, these companies often appear at the top of various rankings, such as the Fortune 500 list for 2021. As the world continues to adapt to pandemic measures, big tech will continue to play a critical role in keeping people connected while pursuing their moonshot ideas in driverless cars and space.

As we look ahead, the powers of big tech will continue to see government intervention to try and mitigate the powers that these companies have amassed. Furthermore, as organizations strategize on how to return safely back to work, companies will need to contemplate what are truly perks to employees in a hybrid working world.