How to Conduct a Coaching Based Performance Review 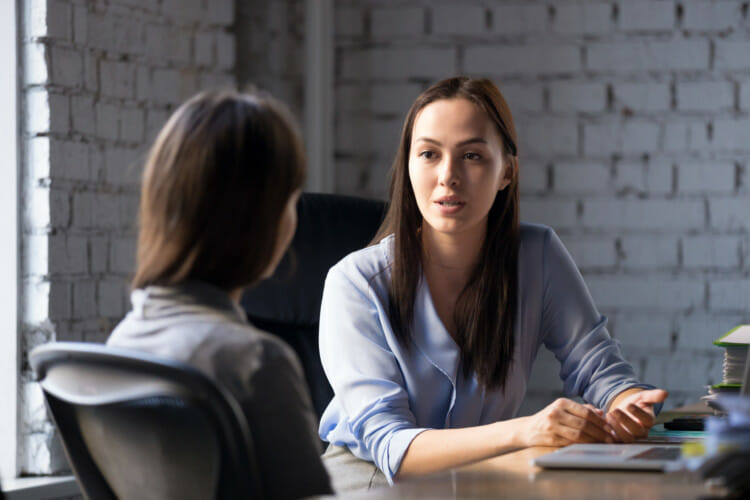 Here’s a simple structure you can use to conduct your coaching-based performance review. Coaching is about having a structured conversation, not giving out a report card. It’s about engaging the employee’s heart and offering wisdom and insight and instruction. Here’s how to do it:

Step 1: Decide on the Outcome You Want

Coaching is a time to engage in conversations that don’t normally arise, even though you may work closely together. The person you’re coaching should leave their coaching session with:

Step 2: Create an Environment of Safety

A safe location is a place that represents neutral ground. That means the coach is not in the “power position.” No sitting behind desks, or meeting in a space where the leader has the power. It also means a place where there is some privacy, and you can both talk without fear of being overheard. Typically that means a neutral meeting room, a coffee shop, or even an outdoor picnic table. Be creative.
Assure the person that you won’t be discussing your conversation with their co-workers and that they can feel free to speak their mind. Make the person being coached feel safe.

Before a person can hear anything from you, they have to “empty out.” If you begin by talking, they won’t hear much of what you have to say. It’s quite simple if you ask them: “What went well, and what could have gone better?”
Until they’ve emptied out, the coaching session hasn’t really begun.
Ask active questions. An active question is one where the responder has to take some responsibility for his actions. Imagine the responses that you would receive to:

“Do people treat you well around here?” (passive) and

“What are you doing to build positive relationships around here?” (active)

Many people are under the misguided notion that someone else can make their life work for them. One day their spouse will wise up, meet their needs, and make them happy. One day, the world will figure things out and give them a set of circumstances (maybe winning the lottery) that will finally make things better. And one day, one day, maybe someone at their workplace will figure them out and serve up just the right conditions on a silver platter so that they can be happy.

Of course, this is a myth. The truth is that it’s up to them to make themselves happy. No one can do that for them. Two unhappy people who want their needs met don’t come together and make a happy marriage. Lottery winners are generally worse off after they win. And no workplace is going to make someone happy. Deciding to be happy is a choice that everyone has to make for themselves.

Use active questions to help your team member understand that they have to take action if they want to have a positive work environment. You can advise them and be a sounding board and try to remove obstacles that are getting in their way, but it’s not your job to make someone else happy.

Step 4: Ask them how they’re doing in two areas: attitude and productivity

Begin with attitude. Ask them to score themselves out of ten on how their attitude has been for the past quarter. Next ask them to estimate their level of productivity out of ten.

During this time, you need to hold your tongue. You may completely disagree with what they’re saying, or believe that their remarks are unfair, unkind, blinkered, or unwarranted. Resist the impulse to correct them, defend yourself. Just let them talk and concentrate on listening.

Step 5: Give your feedback

Now it’s time for you to share your view of their score. How do you think they score out of ten in attitude and productivity?
Be honest. Only the truth sounds like the truth. If you’re making things up to soften the blow, or trying to hide the truth, it won’t sound real and the employee will see through your efforts at concealment.

Give examples to support your reasons for scoring them as you did. If they scored very high on attitude tell them why, and be specific. Your employee will be happy (and maybe astonished) that you noticed.

The same is true with areas for growth. “Last month when you came in late three days in a row, it was hard on the team because they all had to work late as a result” is better than “You could grow in the area of punctuality.”

Be kind. The best way to help the receiver hear your comments is to be kind. That doesn’t mean excusing bad behavior or saying that something was okay that really wasn’t. But being nice is free, and you should be nice whenever possible. That means not being overly picky, and not sweating the small stuff.

Step 6: Ask them for their “commits”

At this stage, you’ve had a good, honest conversation and your employee has a clear understanding of how they’re doing. Now it’s time to make some commitments to each other about how things are going to change before the next coaching session.
Will they commit to being punctual, increasing quality, or changing his attitude toward a co-worker? They should leave with a commitment that they’re willing to keep.

—Tom Landry, ranked as one of the most innovative coaches in NFL history