This is a simple ‘cheat sheet’ to help you remember key takeaways from the course: “How to deal with Underperformers”  Download the cheat sheet here. You can take the full course here. 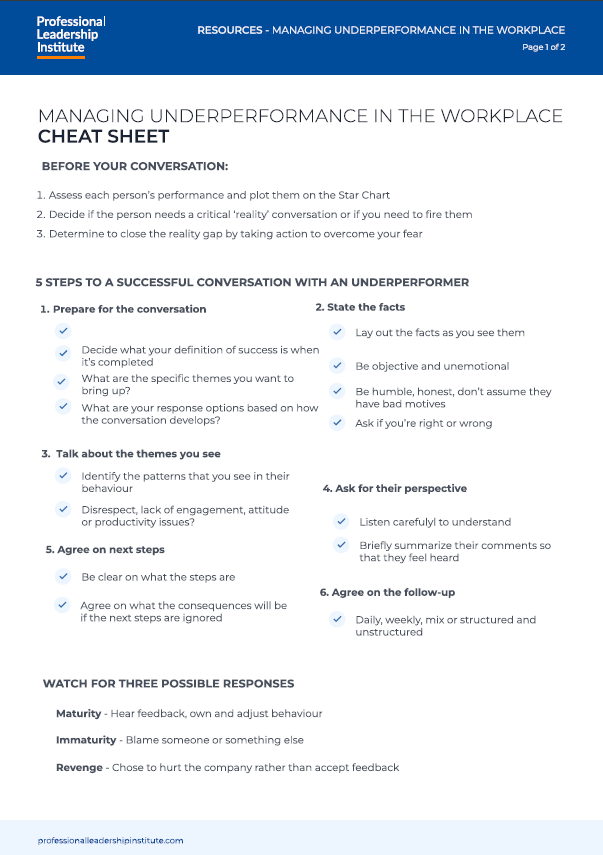 Sometimes under performers aren’t good enough to re-hire but aren’t bad enough to fire either. You feel “on the bubble” about them.

Here are the top indicators that someone is an under performer:

While an under performer may enjoy his work on some level and even complete it in a mostly satisfactory way, it’s obvious to others that he doesn’t have a lot of passion. He may even openly admit this to co-workers, talking at length about what his true passion is. If he had the choice, he’d stay home every day instead of come in to work. These folks make a lifestyle out of “working for the weekend.”

Under performers may not be content with their level of pay or their work conditions, but they are content with the contribution they’re making. They aren’t interested in going to seminars (unless it means a day away from work or going on a fun trip), taking courses, or reading books on how they can get better at their job, particularly if it requires any time commitment beyond their regular work hours.

Many under performers don’t seem to grow in their confidence or ability over time, and this actually may not be their fault. It could be that they’ve been promoted beyond their abilities, aren’t suited to the job, or don’t have the aptitude for it.

A classic under performer gives you the strong feeling that she could continue in her role for years to come and not get much better at it than she is today. This may be because of a wrong personality fit for the role, a lack of intelligence, a lack of self-worth, poor training somewhere along the way, or just that her natural aptitudes move in other directions. Since you’re probably not a psychologist, you may never get to the bottom of the issue, but you know that things aren’t working at present.

Under performers may feel insecure about their standing in the company for a variety of reasons. Maybe they notice the lack of standing ovations coming from their boss. Maybe they know that their performance isn’t as good as other people’s.

Any suggestion of doing these things (which, by the way, would safeguard the company, since none of us can guarantee we’ll be able to work another day) are seen as a threat their power, and they resist them—sometimes with a quiet will of iron—but resist nonetheless.

If you’ve worried about an employee who is a bottleneck due to the vast amount of information that resides with him alone, and who is reluctant to share it, you know that you’re likely dealing with an under performer. However, if this employee starts using information as a weapon, you have a different (and more serious) problem on your hands.

Somewhere along the way, the under performer has bought into the idea that it’s about time spent, not outcomes accomplished. She may scramble to find hours to add to her tally, such as time spent commuting, waiting for airplanes, and sitting alone in hotel rooms, or untraceable and unverifiable hours “worked at home.” In the absence of productivity, I remain agnostic about the reality of these sorts of claimed hours.

This is a particularly bad sign. It shows that the person who has an entitlement mindset. Great people need to be well compensated, but it’s clear that they’re working for something other than money. Ironically, when money is a person’s aim, he often doesn’t end up with much of it.

The best businesspeople I know do not work for money. They work hard because they want to make a difference in someone’s life, or because they have passion to implement an idea, or fix something that’s broken. For many of them, money is an incidental that they certainly enjoy, but view much in the same way a pioneer farmer of the past viewed grain; while it tasted great baked into a nice loaf of bread, its main purpose was to be used as seed to plant larger fields for the next year.

When an employee is fairly paid, but still needs prodding and incentivizing to get his job done, it’s a sign he’s an under performer.

Here are the 7 signs of an under performer: