How to Delegate – Cheat Sheet 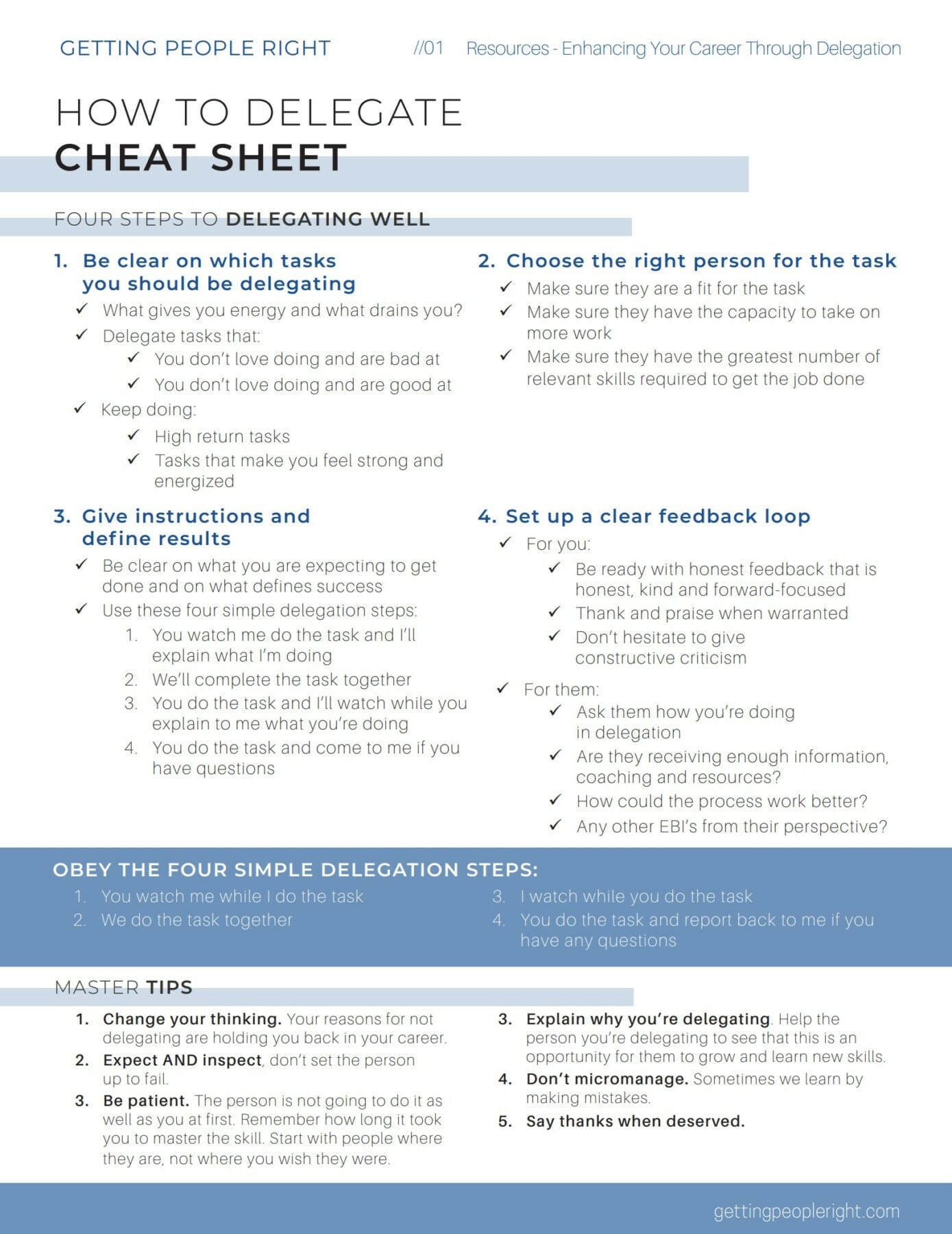 No leader can succeed without strong delegation skills. If you refuse to delegate, you can be a strong personal performer, but to reach truly become a leader, you must learn to delegate. If we’re honest with ourselves, we know that we’re capable of much more productivity than others think we are. The same is true of your employees. Many employees work at 60% capacity. That capacity is there for you to tap as the leader.

According to John Hunt, professor at the London School of Business, 30% of managers say they delegate well. Employees agree, saying that one in three managers are good at delegating. Add to this that most leaders have 30% more to do than they can ever get to. So, you must learn to delegate.

The 8 obstacles that keep us from delegating

If you aren’t delegating now, it’s probably because you need to challenge your own thinking. Which of these obstacles is holding you back?

1. If someone else does it, my value in the organization will decrease

Actually, nothing could be further from the truth. Good delegators are exceptionally rare, and they are of great value to the organization. They build strong people around them, increase the bench strength of their area, and strengthen the entire organization in doing so.

2. It’s quicker and easier to do it myself

This is probably true, but it’s short term thinking. Sure, it’s quicker now. But, will it be quicker in a year. Or in five years? Like parenting, it’s easier to do every job yourself. But when your children have been trained to do jobs, eventually your job is much easier. If you insist on doing everything by yourself forever, you will wear yourself out and lose out on all that help.

This also may be true… right now. Then again it may not be true. Do you possess every skill? Are you great at everything? The truth is that most of us are good at a couple of things, and weak at many more. So even if you’re the best now, others may be able to get better than you because they have natural talents that can to be developed into skills.

You will find that when people take on meaningful work and learn new skills, they are more engaged than ever. Nothing is more satisfying than getting better and better at work that you’re really good at. So, don’t hoard the wealth; give people around you the opportunity to engage and master a skill.

4. I have no one to delegate to

This objection may have several causes. First, you may need to get better people. People who possess the natural ability and desire to take on more work. Are you contenting yourself with B players? If so, that needs to change. Second, it may be that your business has to grow before you can afford to bring someone on to delegate to. If that’s true, make a business case for how you’re going to grow, get to the next level, and bring on a new player to the team.
Entrepreneurial growth is about learning a role, finding someone else who can do it, training them, and moving up to a new role.

5. It’s my job to lead by example and do every task

I like your heart; I really do. It shows that you care about doing actual work and setting the right example. But this kind of thinking will hold you back.
Just because you’re doing everything doesn’t mean that you enjoy doing everything. Or that you’re good at doing everything. You may be doing tasks that exhaust you. Tasks that someone else could be better at. It’s a freeing concept to realize that someone loves doing what you loathe doing.

Leaders should be willing to do any task. Sometimes they need to do tasks that they wouldn’t normally take on just to set an example for others. But doing those tasks permanently? It’s a mistake and a waste of your leadership time.

6. I tried delegating before and it was a disaster

If this has happened to you, it’s probably because you confused delegation with abdication. Delegation is training someone to gradually get better and better at a task. Delegation on the other hand is handing a task to someone and walking away, hoping they’ll do it right. Abdication seldom works. Delegation seldom fails.

Choose carefully who you delegate to

When making this choice, ask yourself two questions:

The four simple steps to delegating

Step 1: I do the task and you watch me
Step one is all about awareness of the task. In this step, you’re simply asking the person to watch you do the task. They are free to ask any questions they have about it at that time. Step one can be the time that you determine their suitability for the job too.

Step 2: We do the task together

In step two, you share the task. Step two is about coaching. You explain to them why you do the task they way you do. Give parts of the job away during this step. Watch how they proceed. Coach and train as necessary.

Step 3: You do the task while I watch
During step 3, watch how they do the job. Ask them to explain each step as they do it. Correct and coach them as necessary. This step provides the employee with the security of knowing that they aren’t being set up to fail. If something goes wrong, or if they’re unsure of how to do a part of the task, you’re there to ask.

Step 4: Set up a feedback loop and let them go
Now that they’ve watched you do the task, they’ve done the task with you, and you’ve watched them to make sure they know what they’re doing, it’s time to let them do it on their own.

But before you let them go, set up a feedback loop. Decide on how and when they’ll have access to you. Is it:

Agree on your access rhythm. When you meet ask how things are going. Ask if they’re receiving everything they need from you. Coach them. Drop in to check on them periodically. Checking is not micromanagement! It’s security for you and for them.

The simple steps to delegation are:

Step 1 I do the task and you watch me

Step 2 We do the task together

Ste 3 You do the task while I watch

Step 4 Set up a feedback loop and let them go!