Very few people like change.  There’s an theory called “diffusion of innovations” which shows the percentage of the population who love change, which are slow to accept change, and which people actually hate change (skeptics or ‘laggards).  Here’s how it looks: 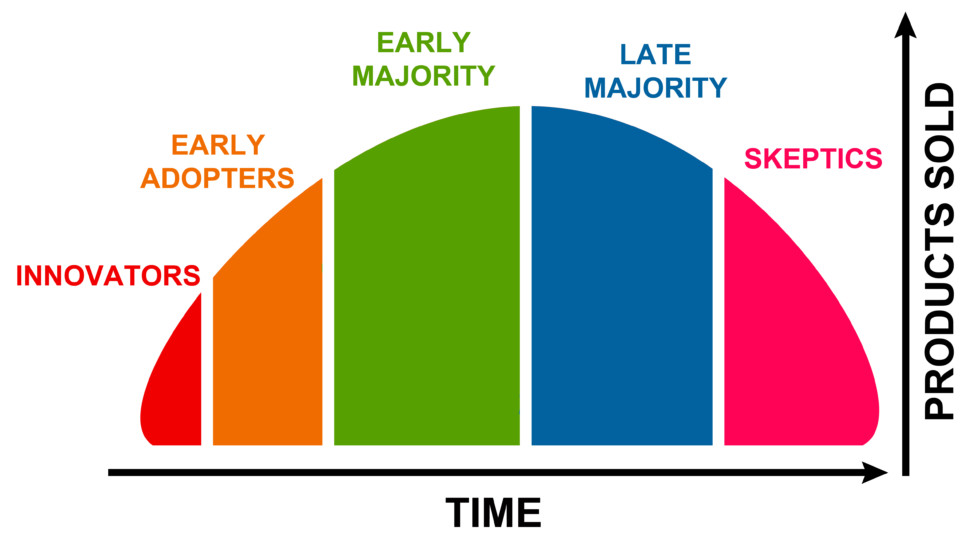 Take me for example.  Technology is a pain in the rear end to me.  I hate changing it.  So, when I finally got rid of my Blackberry, I assume the Blackberry people sat in a corporate boardroom somewhere, head in hands and said, “Let’s face it, it’s over – even Throness has left us.”

According to this theory, 2.5% of people are innovators.  These are the folks who camp out to be the first to buy the newest video game.  13.5% are early adopters meaning they jump on the wagon fairly quickly.

After that, the numbers show that people are relatively slow to buy into change.  According to the theory, 50% of people really hate any sort of change at all, while another 34% grudgingly go along with it.

And here you are, eager to change your organization.

So here’s a simple way to calm people’s fears whenever you try something new.

This is really so easy.  You’ll feel a bit cheated that you had to read so far to find it out, but it does make a very large difference.

Let’s say you want to change:

Any change really.  Just call it…

Say something like this:  “I think this could be a good idea for us, but maybe I’m wrong.  So I’d like to try a one year (or one month or one week) experiment to see how this works out for us.  We can always go back to the old way if we don’t like it.”

People are immediately calmer.  They haven’t necessarily lost the old way.  They only have to put up with a new way for a defined period of time.

Then if it really doesn’t work, you haven’t laid your leadership credibility on the line.  After all, you did say the change was only an experiment.

Whenever you put out an agenda, label it a DRAFT.

Whenever you propose a new idea on paper, label it a DRAFT.

Remember that most people dislike change.  Help them get past it using better language.

Here’s rule 48 from the cynical, humorous and often very true book The 48 Laws of Power:

“Rule 45: Preach the need to change, but never reform too much at once

If change is necessary, make it feel like a gentle improvement on the past.

Even while people understand the need for change, knowing how important it is for institutions and individuals to be occasionally renewed, they are also irritated and upset by changes that affect them personally.”

So, call it an experiment.