10 Muhammad Ali Quotes To Help Your Persevere In Life

A man from humble beginnings Muhammad Ali knew he would become a great boxer before the rest of the world did. It would be his conviction, drive, and insane amounts of hard work that would help him become a champion. It was also what finally earned him his first World Heavyweight Champion title in 1964. He would go on to win two more times – something no other boxer had ever done before.

But Muhammad Ali was much more than an excellent boxer. He was brimming with street smarts and had an uncanny way of making life lessons appear simple and approachable. He was also incredibly funny and his humor was deeply reflected in several of his quotes.

His thoughts and words about life, and boxing are something everyone should read at least once. Below, we collected 10 of the best Muhammad Ali quotes to help you preserve in life just as he did.

1. On where Adidas got their slogan from 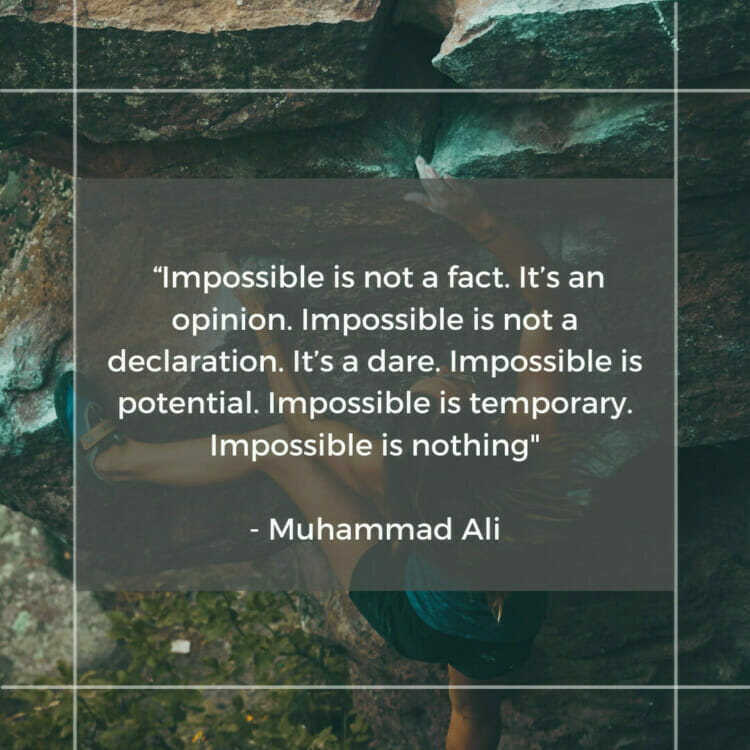 Ok, so maybe we don’t know this with 100% certainty, but there are reports that the brand was inspired by Ali’s quote for their slogan. Whether it’s true or not, it just goes to show how impactful the concept Muhammad was talking about still is today. The idea of impossibility is mostly in your head, and nothing is truly impossible if you put enough work, time and, perseverance into it.

2. On what truly matters in life 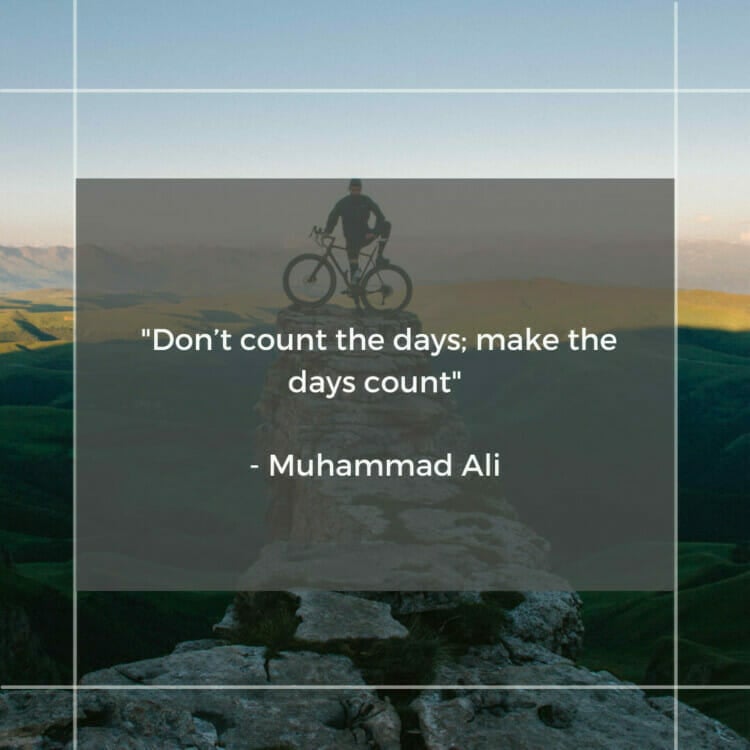 Life is a collection of days strung together to create weeks, months, and then years. So it makes sense to think about it as a collection of moments, feelings, and instances that help build a full and happy life. This is why it’s so important to focus on your energy on the present and on making the moment you’re invaluable and memorable. It doesn’t have to be that you experience adventure or thrill every time you leave your home, but take a moment to smell the roses. You don’t want to look back and realize that you counted days off a calendar instead of moments.

Have some goals that you have been putting off for a while? Take our free course on Building Your Personal Annual Plan and start achieving your goals today!

3. On learning the power of your convictions 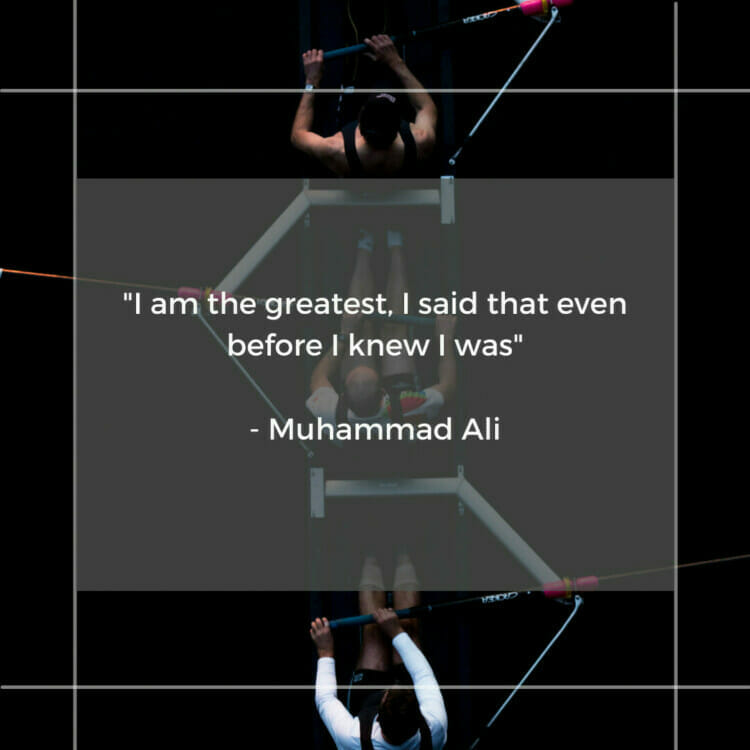 It’s your belief in yourself, even when no one else shares that belief, that will take you far in life. Muhammad Ali knew for a fact he was going to be great and what we had chosen to do, and he believed that even before he knew for a fact he was. It pushed him to work hard in order to achieve that goal that he had set for himself years before. He wanted to bring to life that concept of greatness he had placed on himself, and so he worked backward from there to reach it.

4. On how it’s usually the small things that cause most issues 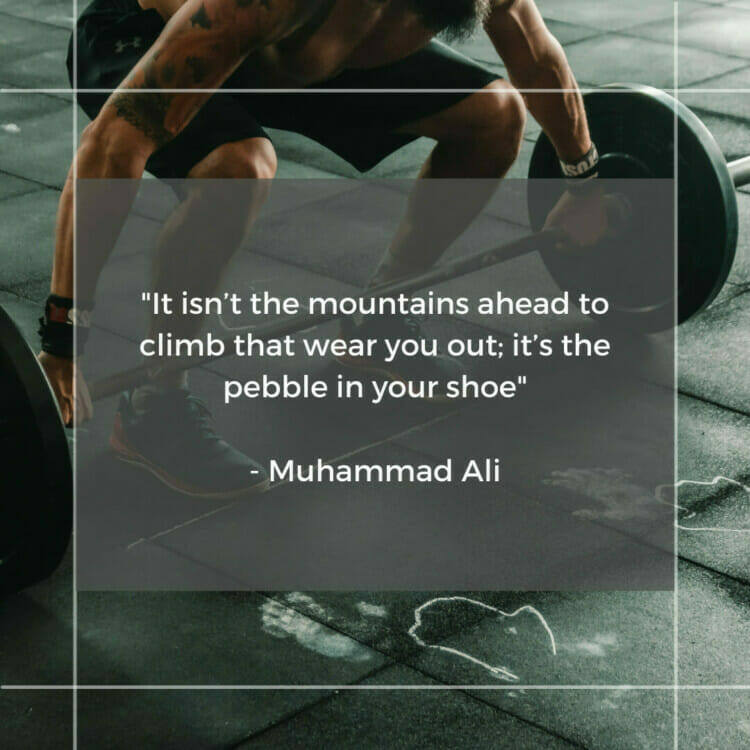 We tend to think about the most difficult things we faced in life as the big moments that really pushed us. Getting fired, preparing for that marathon, or moving to another country. But in truth, it’s actually the small things that tend to pile up that can cause the most growth. Like that co-worker who keeps dropping the ball on their projects that you need to deal with after. You can learn the most valuable lessons for times such as does. For example, a co-worker who just can’t seem to do their job well means you get to practice your communication skills more than once. Look for those little annoying things you seem to always be dealing with and try to find the lesson in them!

5. On what age really is 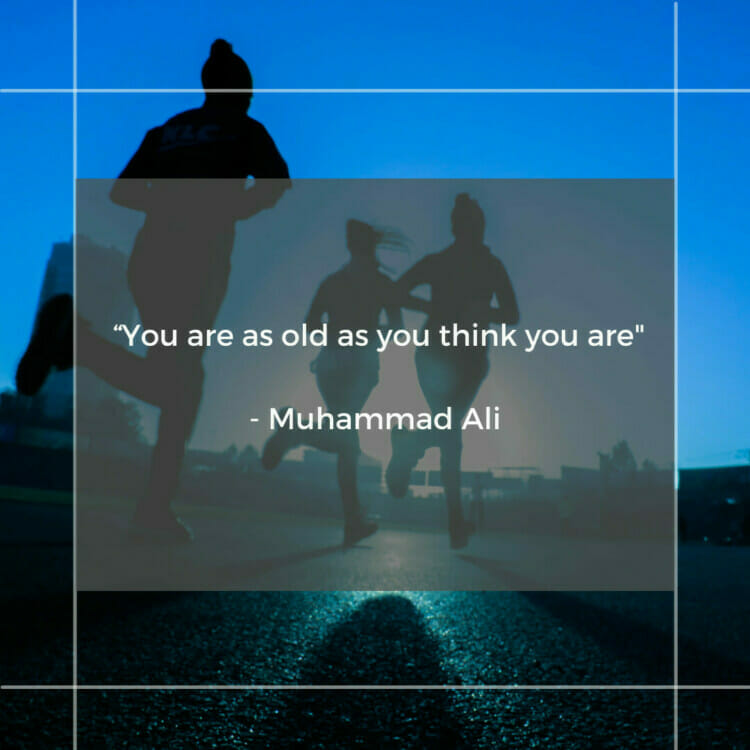 The older we get the less time we feel we have. And it makes sense. Our biological clock is indeed ticking and we don’t have the same amount of time at 40 as we did when we were 20. But that doesn’t mean that after a certain number you’re no longer able to achieve your dreams or do big things. There are plenty of people that found success way after they were 40, and they’re not the exception to the rule. Martha Stewart (yes, the millionaire cookbook author and TV host) hit it big after she turned 40. And Samuel L Jackson, the famous actor, had his first big break playing Jules Winnfield in Pulp Fiction when he was 46.

6. On discovering what we were never taught in school 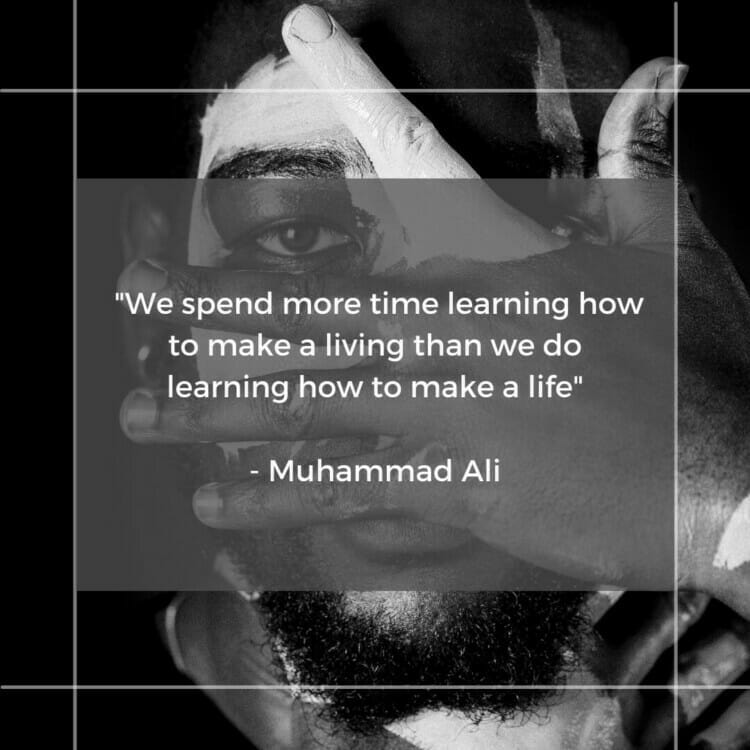 Formal education is a great thing to happen to our world as it levels out the playing field when it comes to basic knowledge everyone should be entitled to. However, there’s a lot more none of us tend to learn in school that is almost more valuable than the ability to understand how to make money. Things like how to communicate properly, how to enjoy a day off, and even how to build your self-confidence. All things needed to enjoy that money you’re producing in the first place.

7. On how fear is our greatest gift 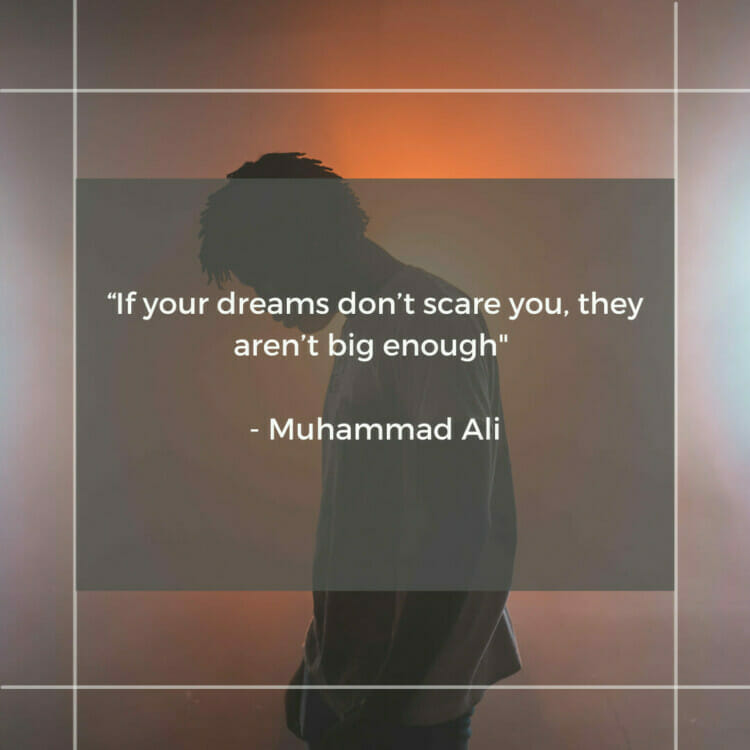 This is one of the Muhammad Ali quotes that encapsulate his whole being. As humans, we are conditioned to see fear as a bad thing. Hundreds of years ago, and even today to some degree, fear of things is what kept us alive and breathing. Today, that fear can actually be used as fuel to propel you forward instead of a weight that holds you back. That big goal that seems almost impossible? That’s the one that’s going to give you the most satisfaction to achieve.

8. On how life is a collection of steps 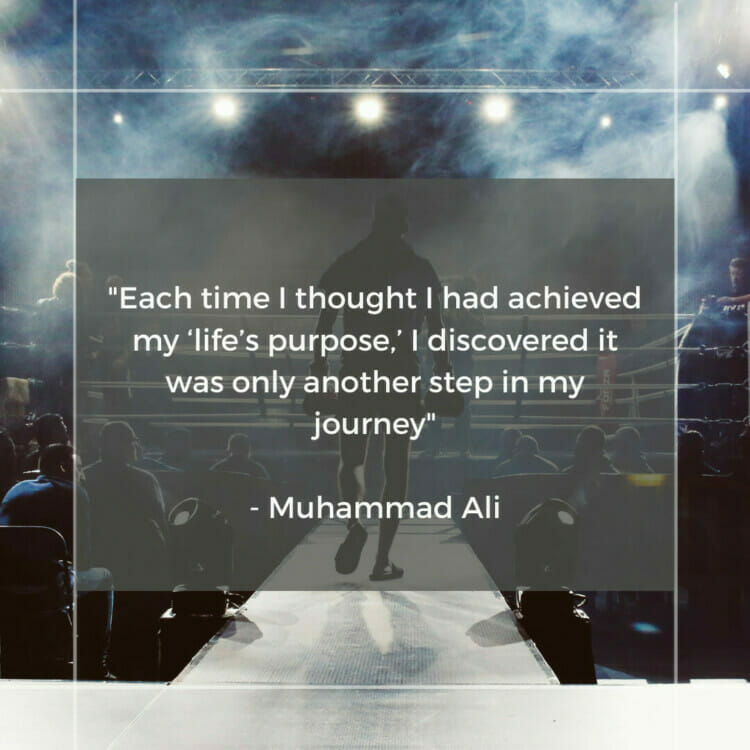 One of the most beautiful things about life is that it’s ever-changing. What you might have thought was your ultimate goal, once achieved, becomes something of the past. While that might be sad for some people, there’s something to be said about always having a new mountain you get to climb. It’s a privilege to be able to keep finding new things that bring you fulfillment and happiness.

9. On learning to appreciate failure 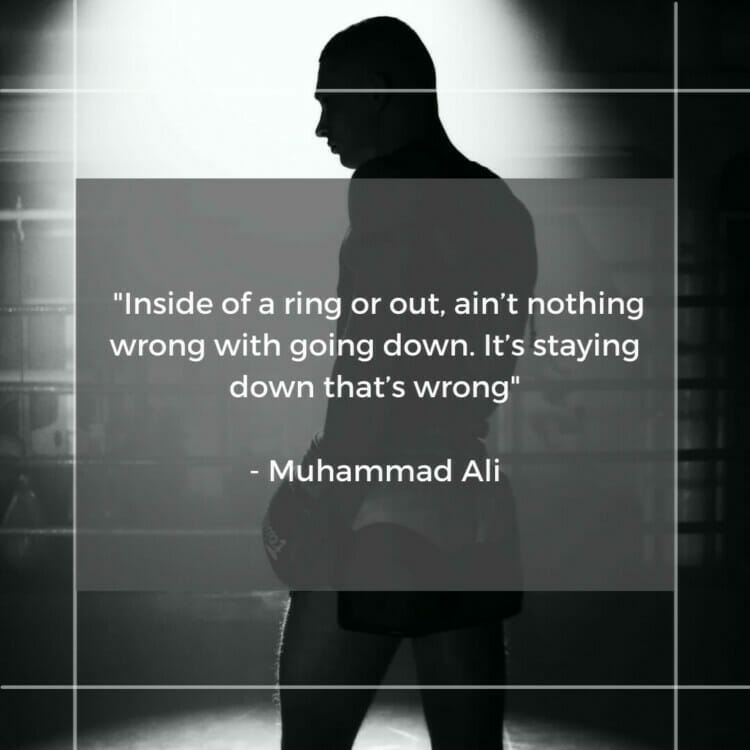 This is a life lesson you’ll find all the great minds in history share. We are conditioned as children to never fail, and that failure is weakness. But how are you supposed to learn what not to do if you always do everything right? How will you practice how to live with those negative emotions failure can bring if you’ve never tasted it? Even more, how will you appreciate winning when you never tasted losing?

10. On getting to choose who you become 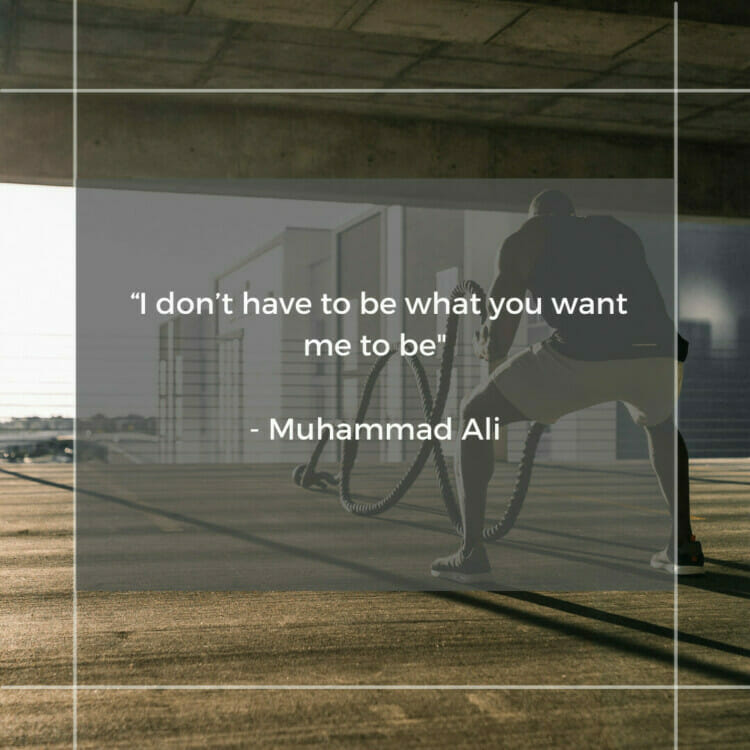 The biggest opportunity in life is getting to choose who you want to be. Anything you can imagine, anything you’ve dreamed of? You can achieve it. Never let other people dictate who you should be, or what you can or can not do. Only you have the power to decide that, and only you have to power to make it happen.