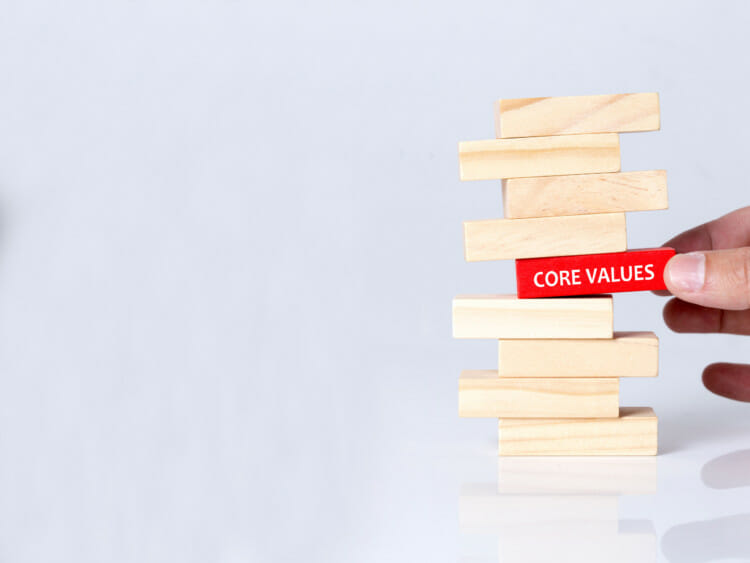 What are company core values?

Company core values are simply the rules of behavior that everyone in the organization agrees to live by. They’re expressed in simple terms, not in corporate jargon.

Most important, they’re behaviors that really matter. Leaders aren’t prepared to walk past violations of them. In fact, leaders will fire over repeated violations if they persist and the offender can’t or won’t change their behavior. They’re really important, and they define your culture.

There aren’t very many of them either; five or less. I prefer to narrow it down to three. We’ve all seen examples of vanilla core values that hang in the lobby and are beautifully framed and written in calligraphy. There are usually at least ten of them. You can’t disagree with any of them because most of them are ‘table stakes.’ I.e. if you want to play the game, you have to come with basic table stakes.

These are things like honesty and integrity; qualities we assume everyone has, or they wouldn’t have been hired in the first place. And everyone has long since gone numb to these ‘values.’ They don’t matter to anyone, and they don’t affect the way people behave. Real core values guide the behaviors and decisions that are made by team members on a daily basis. Core values are simply the most important HR tool you have in your toolbelt.

What are some examples of real core values?

Here is a list of real core values used by real companies that I have worked with:

For more examples of core values and how they’re discovered and used, check out “The Power of People Skills” (Career Press, 2017) here.

Make sure leadership walks the talk

The most important principle of human motivation is:

People imitate the example set by their leaders.

By far the most important way to make core values live in your organization is to ensure that leadership lives them out every day.

Not consents to them. Not gives them a thumbs up, but lives them out every day, believes in them passionately, and models them to everyone around them.

Take your list of core values and score yourself on how well you live them out on a daily basis. Now assemble your leadership team and ask them to score themselves in the same way. Score each other and share your results! Nothing is as important as walking the talk, so lock it down with your leaders.

Hire based on values

You can teach a person how to do a task. But it’s nearly impossible to teach someone new values. Either they value the same things you do, or they don’t. If they don’t, it’s a major challenge.

According to a study by Leadership IQ, 46% of newly hire employees will fail within 18 months, while only 19% will achieve unequivocal success. But contrary to popular belief, technical skills are not the primary reason why new hires fail; instead, they fail due to ‘soft’ issues. Values-based issues.
The study found that:

Read more about the study here.

So, when you’re hiring, pay attention to values. They are the determining factor in whether your new employee will succeed or not.

Evaluate and coach based on the values

In order to make the values more than just a sign on the wall, use them during quarterly coaching. A very simple way to do this is to write out each value and ask your team member to score themselves out of ten on how well they live them out in a given day, week, or month.

Then, share with the employee how you would score them. Now, have a discussion about points of agreement and disagreement.

When an employee knows that you are paying attention and coaching based on the values, they will take immediate notice and start living them out.

Put the core values on the walls

A simple way to make the core value live is to put them up on the walls in big letters. Hang them in the lunchroom. Put them on signs in the washrooms. Make them your email signature. Get creative with it! The more people see them, the more they’ll be reminded of what they are and how they should behave.

Just remember that people care more about ‘what happens in the halls’ than ‘what’s up on the walls.’ But, it’s still a good idea to make them visible to everyone.

Tell company legends about the values

One of the best ways to help anyone remember a value is to tell stories about how they’ve been lived out in the past.
Maybe these stories come from the founding of the company. Maybe they are times when the company was under extreme pressure, but still lived out the values. Decide on what your legends are and tell them over and over again. You’ll know you’re telling them often enough when your team starts mocking you about it!

Reward those who live them out

Rewards look different for different people. Some appreciate being recognized during a staff meeting. Others wilt if they’re recognized in public. Following are some ways to reward people. Choose the right one for the right person:

When someone is disciplined or let go due to a core values violation, everyone in the organization will sit up and take notice. They will review the values and mentally check their own behavior against them. This is the goal!

If your values are truly core, you won’t put up with violations of them. You’ll take action.

Once the core values are set in your organization, they will shape your culture and help you build an amazing work environment.