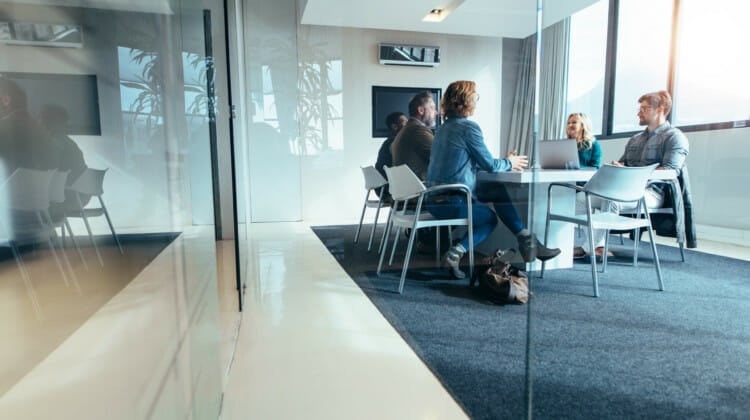 If you and I were to meet in a coffee shop, we could set your company goals in about 15 minutes.  All of them, long term, five year, and one year.  And you would go back to your business and discover that they’ve had no effect on the team.  Like winking in the dark, you may feel like you’ve done something, but if no one notices, there’s been no communication.

People embrace what they help create.

In this article, I will teach you how to set team goals for your one page strategy plan.  Once you’ve involved the team, the entire business moves into a higher gear.  Here’s the simple process to develop team-based goals:

Involve no more than 12 people

There’s a people law called ‘the law of 9’ which states that, when more than 9 people are in a room, effectiveness of debate and discussion goes down.

When more than 9 people are in a room, participants begin to feel that they are giving a speech rather than having unfiltered dialogue.  This depends on how well participants know each other, and how much trust exists in the room.

Ideally though, you want a smaller group that represents the key stakeholders on the busienss to debate the goals.

Ask them to write up to four goals

Now you ask the group this question:

If you were CEO, what would be your goals for the next year (or five years, or 90 days, or whatever time period you are setting goals for).

Emphasize that they aren’t setting goals just for their department or their role, but for the entire organization.

Give them a few minutes to think through their goals, but ask them to work on them individually, not in groups.  You want to know what people are really thinking.

Write all of the goals on a flipchart

Once everyone has come up with their four company goals, ask each person to share one.  Write it up on the flipchart, and number them in sequence.

Repeat this process until everyone’s goals are listed and numbered on the flipchart.

The reason you don’t ask the first person for their entire list is that they will take many other people’s ideas, and others won’t have a chance to participate.  Asking for one goal only, per person, helps keep the group interested, and ensures maximum participation.

Ask the team to vote on them

Now, give each person four votes.  Ask them to decide which of the listed goals make their ‘top four’ list.  Don’t let them stand up in front of the flip chart and examine other people’s votes before making their decision.  Everyone must decide before the voting begins, and everyone must write down their choices.  No ‘strategic voting’ allowed.

Once everyone has chosen their top four goals, ask them to put their checkmarks on the flipchart beside the goals of their choice.

Ask the main leader to go last, so they don’t effect other people’s choices.

Just because one goal is a ‘winner’ doesn’t mean it automatically becomes a main goal.  It means that now the team can have focussed debate about priorities.

Encourage unfiltered dialogue.  Ask the quiet people ‘what they aren’t saying.’  Ask people to ‘please disagree.’  Thank people for bringing up other points of view.  Have a good healthy debate before making decisions.

Now that you’ve heard every person’s opinion and debated the goals, finalize them.  Number them in order of priority.  Choose the #1 team goal and underline it in red.

This process will involve the team, and encourage commitment by everyone.

Making goals on your own isn’t very effective.  For people to buy in to direction, they need to have a say in what it is.  Here are the keys to developing team-based goals for your one page strategic plan:

Thanks for reading this article on The Top 5 young leader courses.  Below are additional resources from Professional Leadership Institute, the global provider of online human resources and leadership tools