What is Disruption or Disruptive Innovation in Business? 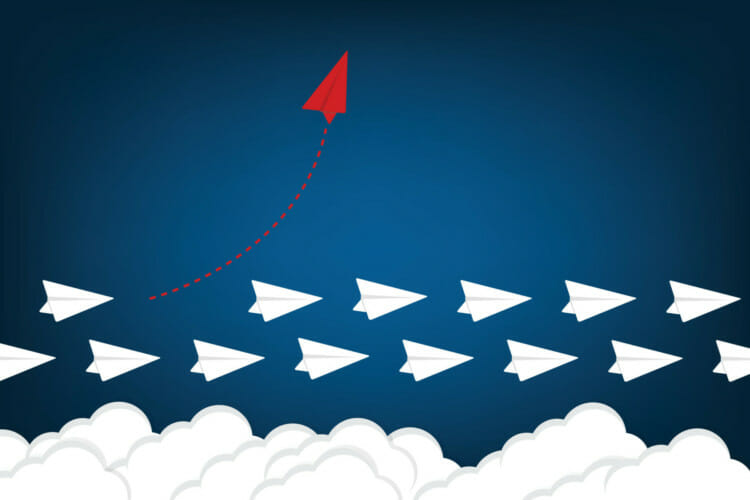 One of the most popular modern theories in business is Clayton Christensen’s disruptive innovation. The theory made its first appearance in Christensen’s 1997 book, The Innovator’s Dilemma. Since then, business leaders and academics use the theory to understand how disruption occurs and how new businesses can enter a market and rise to the top. Typically, industry incumbents overlook these new businesses. As a result, the new entrants often make their way upmarket, taking all their earlier learnings with them and poising as a true threat.

What is disruptive innovation?

Disruptive innovation occurs when a small company with little resources successfully challenges the market leader. These small companies achieve this either by targeting customer segments neglected by the large incumbent or creating new markets to convert non-customers into customers. In both situations, the market faces disruption as the smaller competitor substantially impacts the market. As a result, the smaller competitor takes market share away from the market leader, also known as the incumbent.

Why is recognizing disruption important in business?

There are many businesses that can tell the story of why it is important to understand when your business is facing disruption. One of the best examples is Blockbuster.

In the early 2000’s, Blockbuster had a market value of $5 billion with more than 10,000 stores across the United States. The then CEO, John Antioco, successfully turned around the company and led them through its IPO. However, by 2010, Blockbuster filed for bankruptcy. And in 2014 the company closed their last corporate store. What happened? A then smaller company called Netflix had disrupted the video rental business with a new business model. By the time Blockbuster could recognize the company as a threat, it was too late. The industry was re-invented and streaming reigned as king. Blockbuster had been disrupted.

Had Antioco recognized and acknowledged Netflix as a disruptor and even threat, maybe the fate of Blockbuster would have been different. Instead, reports tell us that Antioco did not take Netflix seriously as a company. In some articles, it even talks about Antioco mocking Netflix cofounder Reed Hastings in a September 2000 meeting where Hastings tried to sell Netflix to Antioco for $50 million. 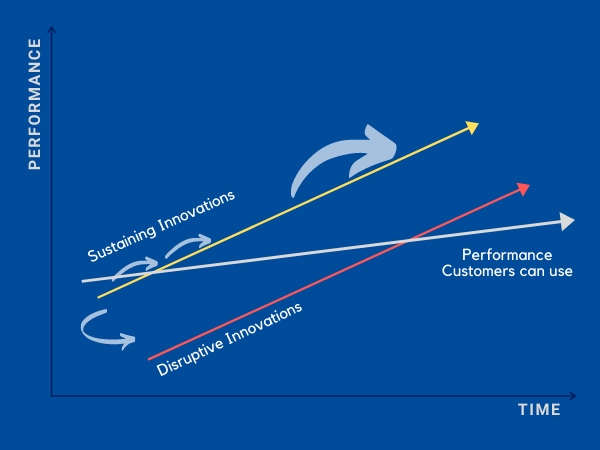 There are two ways that businesses can innovate and potentially cause disruption – through sustaining innovations and or disruptive innovations.

Disruptive innovations are different in that it focuses on either low-end and or new market footholds. With a low-end foothold, businesses address the customer segment that is neglected by the larger companies. By doing so, they attract customers with a product that, while maybe inferior at the beginning, slowly improves until they overtake the larger company. With new markets, businesses deliver different values. This attracts customers from the market. In some cases, this will even attract new customers who were never part of the market.

While any company can make a sustaining innovation, incumbents are the typical winners in this space because they tend to have more resources. Disruptive innovations are more suitable for new entrants for many reasons. For one, new entrants have yet to establish their business model, allowing them to target customer segments that are otherwise unprofitable for large organizations. Also, new companies have fewer policies and processes that may hinder and or make it undesirable to adopt new business models.

Another great example of disruptive innovation is the Apple iPhone. Most would argue that the iPhone disrupted the cellphone industry. However, what the iPhone really achieved was overtaking the personal computer as the primary access point for the internet.

The first version of the iPhone is an example of sustainable innovation. It offered product features and improvements on the cellphone. It also targeted the same customers as incumbents. As the iPhone evolved, though, it became a disruptive innovation. By creating the app store, the iPhone was able to offer a variety of applications on the iPhone, turning the device truly into a pocket computer. This created a challenge to laptops being the primary device for users.

Clayton Christensen was known as the father of disruptive innovation theory. His career was expansive and includes an MBA from Harvard Business School and a stint at Boston Consulting Group. Additionally, he reached full professor within six years at Harvard Business School. Christensen received multiple honorary doctorates, served as board of directors for Tata Consultancy, and founded his own consultancy, Innosight LLC. His disruptive innovation theory is recognized as one of the most important contributions to modern business theory. Christensen authored many articles to preserve the true interpretation of his work and to address the misunderstanding. He will be remembered.