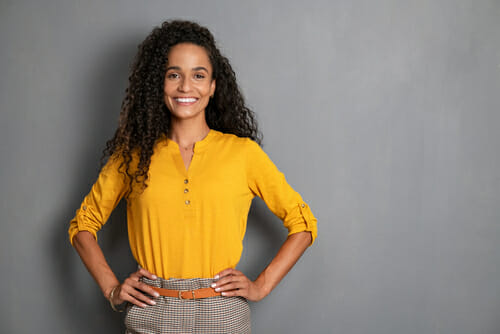 Business casual for women as a workplace style, and women’s clothing itself, has changed drastically over the years. Not so many moons ago, wearing your pajamas outside of your bedroom was the most humiliating thing you could be caught doing. Going to the airport, the grocery store, and even playing outside as a child was an all-out event. Now? Casual Fridays at the office, onesie day at school, and outdoor weddings where the guests wear jeans are common occurrences.

Business casual as a concept was first seen within the borders of Silicon Valley in the early 1980s, and swept over offices around America during the 90s. As we move into even more of a casual office setup with the appearance of Covid, clothing is following suit creating yet another change to the concept. The idea of business casual is a living and breathing entity that molds itself to whatever is happening in society at the time. What was considered business casual before is likely not the same thing we’ll consider in the near future. Sweatpants and the same t-shirt you slept in seem to be gaining speed on the horizon.

Women’s Workwear During The Early 1900s

In order to understand the concept of business casual women’s style, it’s important to understand what came before it. As opposed to men’s clothing choices, women’s clothing has fluctuated greatly throughout the decades. There have been a few moments during history that played a big role in slowly changing the concept of workwear for women. They’re worth diving into before looking into modern concepts of business casual for women’s workwear.

During the first 10 years or so of the 1900s, women began to be allowed to earn and save their own money. When it came to clothing choices, however, there was a bit less freedom although it ultimately depended on what kind of job they were performing. For example, someone working as a domestic service person would have likely had to wear a prescribed uniform. On that same note, uniforms were also applicable to nurses and waitresses. A person working at a factory on the other hand, while required to wear an apron was able to wear basically anything they wanted under it. It gave them a chance to showcase their individuality via accessories, colors, and patterns.

Changes During The Late 1900s

Women had to still dress a certain way to convey credibility and to be taken seriously. Clothing choices at the workplace were a weapon women could wield to help push them forward in their careers. Picture a woman working in baking or investment. To fit in with the boys they had to rid themselves of all signs of feminism and delicateness that could potentially play against them, creating the concept of business formal as a clothing style. But even in those circles, clothing could be used to their advantage. Shoulder pads for blazer jackets during the 80s for example, made women look more imposing and strong.

When Silicone Valley appeared, however, and with Millenials entering the workforce, things started to change once more. It’s true that the first people to reject the concept of a stricter dress code were men in IT companies, but the idea of business casual for women followed shortly after. While the Financial section still maintained the concept of more formal dressing, women in office jobs within less strict industries found themselves with more clothing freedom as the years went by. With the spurting of more flexible-based jobs such as freelancing digital nomads, or those that work at start-ups, dress codes became laxer and laxer. Going back to the concept of how Millenials altered their environment, this was a generation much more open to focusing less on the outside and more on the inside. It was about people’s ability to do their job, regardless of how they chose to dress.

The workplace has never seen such freedom of choice before this era. It’s understood that if someone is uncomfortable in their clothes then their work suffers. Ultimately, this could also affect the company’s bottom line. There’s also plenty more social judgment that comes with forcing women to abide by a specific dress code.

All this said, it still rings true that there are specific industries where maintaining certain clothing rules is necessary. On the one hand, you have jobs that require uniforms to safeguard the worker (a good example of this would be people working in factories having to wear steel toe boots), and on the other hand, there are jobs that require a specific look to still maintain the level of credibility needed (such as someone working as an investment banker). Even the second type however have slowly started to change bit by bit. Nowadays, if a millennial enters their therapist’s office and she’s wearing casual jeans and sneakers it’s unlikely they’ll think she’s any less capable if at her back is a wall of diplomas to showcase her expertise.

You know now a bit more about the history of women’s workwear. Now, let’s deep dive into what building your business casual wardrobe looks like. It’s worth checking if your workplace has a detailed dress code first. But if not, below is a list of basic pieces you can mix and match to create fresh and polished outfits that still showcase your personality.

Get started on achieving your goals today with our free course on Building Your Personal Annual Plan!