10 Motivational Speeches That Will Inspire You to Take Action Today 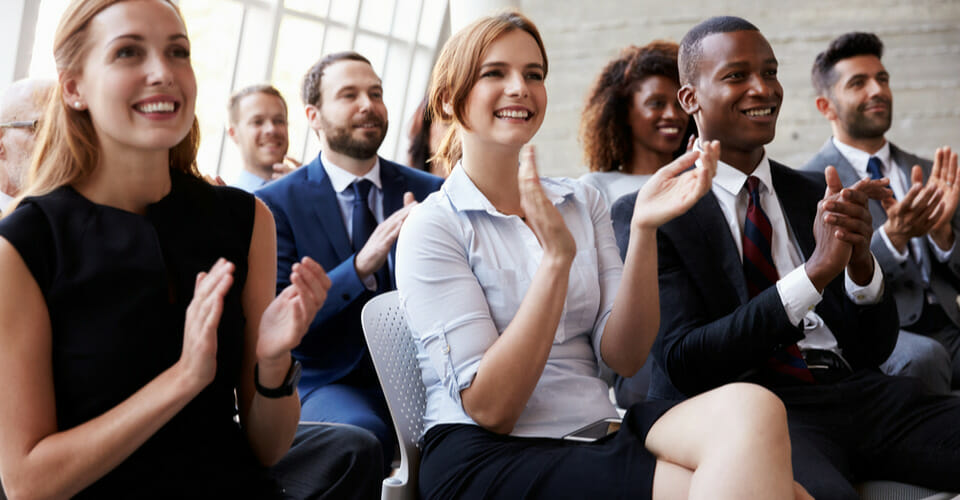 Whether you’re looking to increase team productivity or turn your daydreams into a reality, motivation is key. But, in the day-to-day of working life, it’s easy to lose sight of end goals and become distracted. Thankfully, the wise words of entrepreneurs, writers, and fictional characters can offer a reinvigorating perspective. The following motivational speeches may give you the push you need to reach your full potential.

“Your work is going to fill a large part of your life, and the only way to be truly satisfied is to do what you believe is great work. And the only way to do great work is to love what you do. If you haven’t found it yet, keep looking. Don’t settle. As with all matters of the heart, you’ll know when you find it.”

In this commencement address, the CEO and co-founder of Apple Inc. shared one of the keys to his success: love. His love for the work he did kept him excited about going to work every day and working toward new goals. Often, there is a big difference between what you want versus what other people want for you. Discovering what you’re passionate about, and working toward it with achievable goals, will lead you to success and satisfaction. This is why it is our staff’s number one pick for motivational speeches that will inspire you to take action today.

“You’re an interesting species, an interesting mix. You are capable of such beautiful dreams, and such horrible nightmares. You feel so lost, so cut off, so alone. Only you’re not. See, in all our searching, the only thing that we’ve found that makes the emptiness bearable… is each other.”

While this Sci-Fi classic might seem removed from reality, it offers uplifting advice for the workplace and beyond. In this scene, Ellie finally makes contact with an alien who offers insight into the human condition and the larger universe. To apply the alien’s words to the workplace, think of the power of teamwork. Establishing a diverse and talented team can improve employee happiness and performance. For example, burnout is a common problem at companies. Sharing the workload,  and knowing you can rely on team members and managers for support, can re-motivate employees. When the going gets tough, it’s a comfort to know you’re not alone.

“Our deepest fear is not that we are inadequate. Our deepest fear is that we are powerful beyond measure. It is our light, not our darkness, that most frightens us. Your playing small does not serve the world. There is nothing enlightened about shrinking so that other people won’t feel insecure around you. We are all meant to shine as children do. It’s not just in some of us; it is in everyone. And as we let our own lights shine, we unconsciously give other people permission to do the same. As we are liberated from our own fear, our presence automatically liberates others.”

In this scene, Timo, a member of the basketball team central to the movie, responds to the question the coach asks throughout the movie: “What is your greatest fear?” Timo’s words touch on the importance of self-efficacy. By believing in yourself, you can deepen your interest and commitment to a given task, and recover faster from setbacks. If you lead a team or company, others will soon be influenced by your can-do attitude. So, stop fearing your own power and shine.

4. Chris (Will Smith) Gives His Son Advice In the Pursuit of Happyness (2006)

In a world full of naysayers, it’s easy to become discouraged. In this scene from the heart-warming film, Chris offers his son priceless advice: to pursue his dreams mercilessly, without letting other peoples’ ideas of him get in the way. While this motivational speech is noble and beautiful, you might find it challenging to apply to your own life. Here’s where building a strategic plan— with short- and long-term goals— can make pursuing your dreams concrete. With a clear and concise vision for the future, you can put these words into action.

5. Rosalinde Torres: What it Takes to be a Great Leader

“So what makes a great leader in the 21st century? I’ve met many, and they stand out. They are women and men who are preparing themselves not for the comfortable predictability of yesterday but also for the realities of today and all of those unknown possibilities of tomorrow.”

Rosalinde Torres asserts that exceptional leaders are attuned to the world around them. They pay attention to the latest trends in their field and aren’t afraid to abandon tried and true practices for ones that are the future. Basically, she’s advising the opposite of that popular saying, “Keep your head down.” Because, if you do that, you’ll end up reacting to the future instead of making it. Further, you won’t benefit from a broadened perspective that includes different cultures, industries, and readings. Ask yourself, “When is the last time I looked around me and toward the future?” This is the start of great leadership.

​​”Because you see gentlemen, these boys are now fertilizing daffodils. But if you listen real close, you can hear them whisper their legacy to you. Go on, lean in. Listen, you hear it? – – Carpe – – hear it? – – Carpe, carpe diem, seize the day boys, make your lives extraordinary.”

John Keating motivates his students with a simple sentiment— seize the day. It might seem like a cliché, but it’s a useful sentiment for those stuck in careers they don’t like or struggling to achieve their next milestone. Most working people will spend around 8 hours a day at the office; that’s a lot of time to spend on something you dislike. So, if you’re feeling uninspired or sick of your career, take Mr. Keating’s advice and don’t waste any more time. What are your strengths and weaknesses and how can your harness them into a fulfilling career?

“When I was about 28, after a decade as a professional comedian, I realized one night in LA that the purpose of my life had always been to free people from concern, just like my dad. And when I realized this, I dubbed my new devotion the Church of Freedom From Concern, the Church of FFC. And I dedicated myself to that ministry. What’s yours? How will you serve the world? What did they need that your talent can provide? That’s all you have to figure out.”

The comedian’s advice for a successful and rewarding life is simple: find how you want to serve the world, and pursue it. While it may take years of exploring to find your talent, sometimes it can be as simple as stepping back and reflecting on those moments when you felt yourself excelling and having an impact on others. Finding your calling might seem overwhelming, but asking yourself what the world needs that you can provide will surely set things in motion.

“Let me tell you something you already know. The world ain’t all sunshine and rainbows. It’s a very mean and nasty place, and I don’t care how tough you are, it will beat you to your knees and keep you there permanently if you let it. You, me, or nobody is gonna hit as hard as life. But it ain’t about how hard you hit. It’s about how hard you can get hit and keep moving forward. How much you can take and keep moving forward. That’s how winning is done!”

Rocky’s motivational speech is all about not letting failure define you. This is good advice, no matter your industry. In 2019, 90% of startups failed. But, many successful business people, including Bill Gates and Walt Disney, failed before they succeeded. So, even if the odds are against your, it doesn’t helo to fixate on the negative. In fact, a positive attitude can improve mental and physical health, which will improve your performance in the workplace.

“There is a mismatch between what science knows and what business does. Here is what science knows. One: Those 20th century rewards, those motivators we think are a natural part of business, do work, but only in a surprisingly narrow band of circumstances. Two: Those if-then rewards often destroy creativity. Three: The secret to high performance isn’t rewards and punishments, but that unseen intrinsic drive– the drive to do things for their own sake. The drive to do things cause they matter.”

There is an outdated belief that rewards and punishments are vital to improving employee performance. Pink argues that intrinsic drive— doing things because of internal satisfaction as opposed to external factors—is the real secret to high performance. So, whether you’re a manager or a new employee, consider why your work matters. Aside from your salary, what gets you to work every day? If these questions are hard to answer, you might need to incorporate or seek out a more creative approach. Pink gives the example of companies giving employees flexible schedules, where they can use their time as they want to accomplish set tasks. The schedule allows for more creativity and independence, and thus improves employee performance.

“I’ll tell you this, in any fight it’s the guy whose willing to die whose gonna win that inch. And I know, if I’m gonna have any life anymore it’s because I’m still willing to fight and die for that inch, because that’s what living is, the six inches in front of your face. Now I can’t make you do it. You’ve got to look at the guy next to you, look into his eyes. Now I think you going to see a guy who will go that inch with you. Your gonna see a guy who will sacrifice himself for this team because he knows when it comes down to it your gonna do the same for him.”

This emotional scene drives home an important point: There is no “i” in team. Both entrepreneurs and executives who work their way up the corporate ladder know that they won’t achieve success all on their own. Attracting and retaining exceptional team members is the foundation of any lasting business. So, think about the skills you’re looking for in an employee and implement a process that’ll allow you to root out those people who will go the extra inch for you. If you’re not in a leadership position, think about the skills that will make you an invaluable hire.

The Bottom Line on Motivational Speeches

No matter what industry you’re in, you can harness the wisdom of real and fictional characters to achieve your wildest dreams. So, get out there, explore your interests, make connections, and create a fulfilling career.