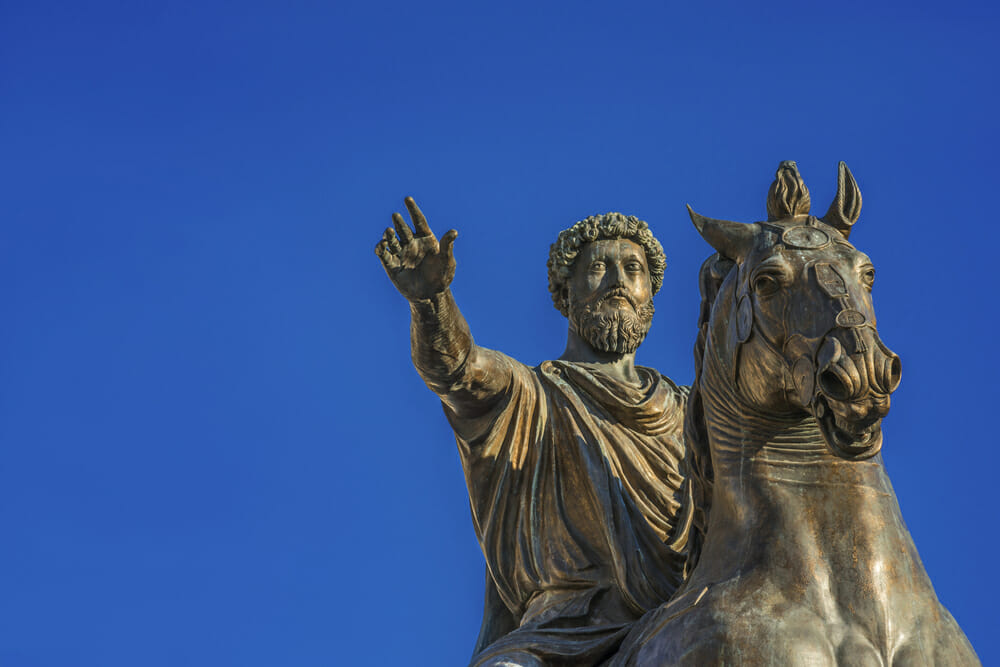 Marcus Aurelius was one of the fathers of modern philosophy, and rightfully so. The former Roman leader was one of the most respected ones in the empire’s history thanks to his skills, intelligence, and humanity. Under his rule, there was a level of freedom of expression unheard of during that time. He accepted criticism from those that opposed him and incentivized the arts. He was just, humble, and fair.

So, it’s no wonder that today, we still look up to him when it comes to understanding what a good leader should look like. While we’re no longer able to learn from him directly, he did leave a slew of lessons and quotes still appreciated to this day.

Here are 10 of the best Marcus Aurelius leadership quotes so you can become the best leader your team could ever need.

1. Marcus Aurelius quote on using your available resources to the best of your abilities. 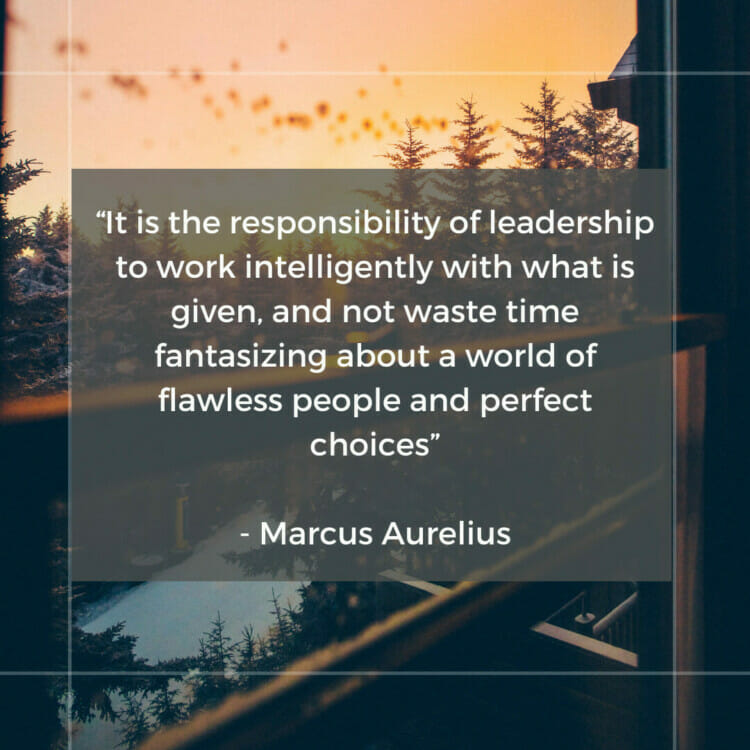 When faced with problems within their team, or the workplace, a true leader will find a way to reach a resolution with the resources they have at hand. Whether that’s using the skills their team already has, or the technical resources the organization has. A leader won’t waste time thinking about how the problem could have been solved quicker if a set of unrealistic circumstances were available instead. A real leader plans in advance, but also takes action and iterates as they go! This quote is applicable to leaders of large corporations or small business owners. That’s why it’s our number one Marcus Aurelius quote. 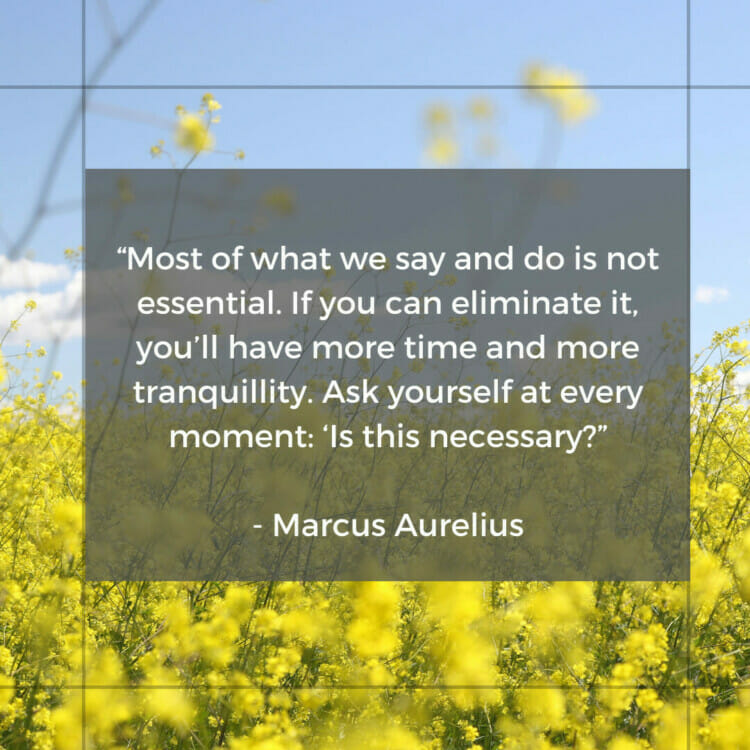 Have you ever sat at your desk, looking at your calendar for the day, only to see it filled up with countless meetings? How about opening your email inbox only to be faced with dozens of emails that are frankly, not important? It’s the curse of leadership. A good manager, however, is able to identify those tasks that are not actually necessary and find ways to eliminate them. Make that meeting an email instead and set up your inbox to automatically filter all those system alert notifications that you’ll never actually read. Then, use your time to focus on coaching your team and developing organizational strategies to push the company forward instead.

3. Marcus Aurelius quote on how actions speak louder than words 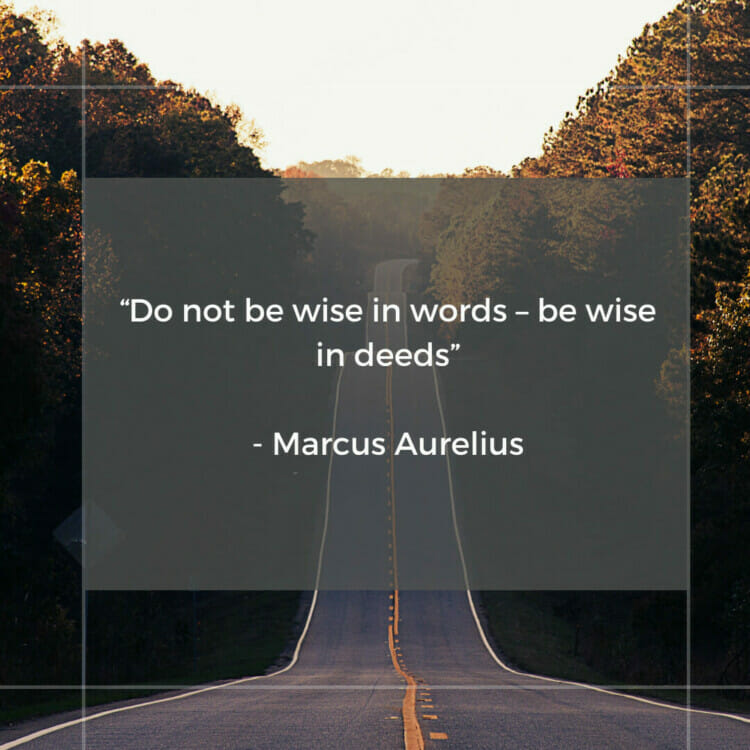 Actions will always speak louder than words, and when it comes to building trust with your team, this is a universal truth. It’s easy to say what people want to hear but harder to act on those words when things get tough. But, if you can prove to your people that you will stay true to what you say you will do, you’ll have built a level of connection and trust that will be hard to break.

Take our free DISC assessment to see what your exact personality make-up is!

4. Marcus Aurelius quote on keeping a good attitude at all times 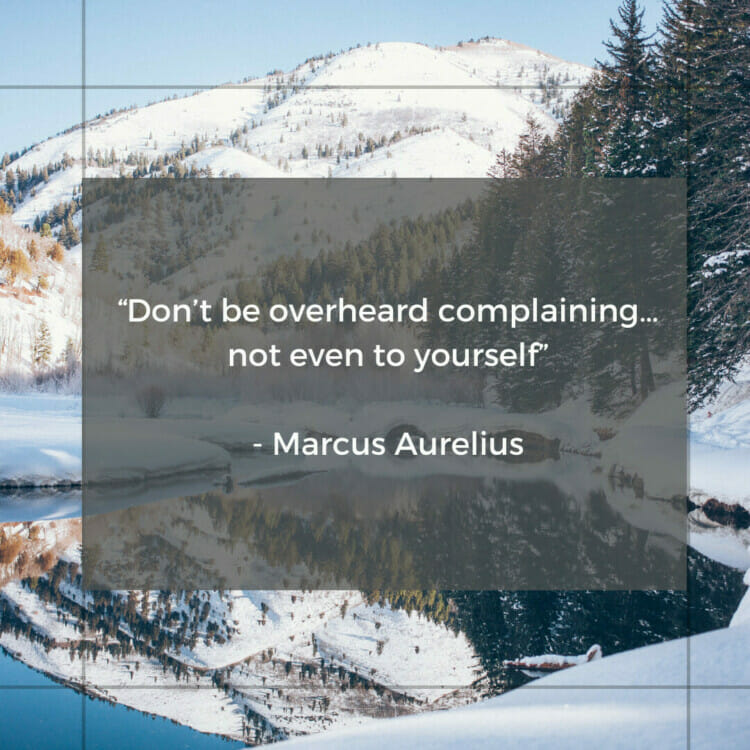 Let’s face it, no one likes a negative Nancy. Being frustrated and upset with a situation is common human behaviour, and the point here isn’t to bottle up your emotions and let them stack up until you explode. But, there are more productive ways to get rid of those negative feelings in a way that won’t emotionally bring down everyone that hears you – or yourself. Try making an action plan to prevent the situation from happening again and focus on what went well instead. If all else fails, a good workout can channel that energy in a much more efficient way.

5. Marcus Aurelius quote on being prepared for any eventuality 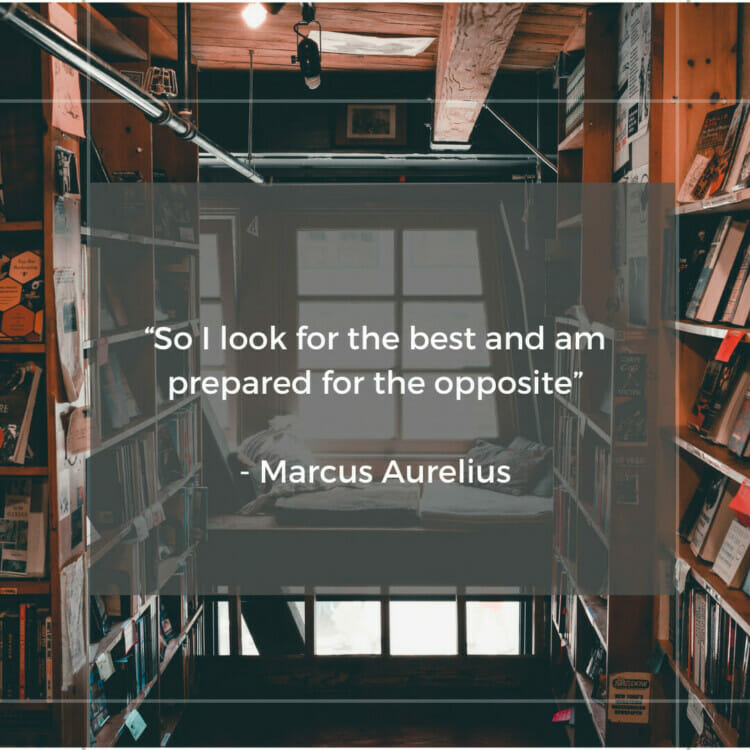 Do you know what the best leaders have in common? They all know how to deal with unexpected problems. Does this mean they have a secret book with solutions to any possible problem they might ever deal with? Well, if they do we’d love for them to share it. But realistically, these leaders are people that have learned how to deal with the unexpected – not with actual problems. If you can learn how to solve a pattern of issues (and not an actual issue), and set expectations on things going right, you’ll have created a powerful combination that most leaders lack. A mix of realisticness and optimism, which is hard to come by. 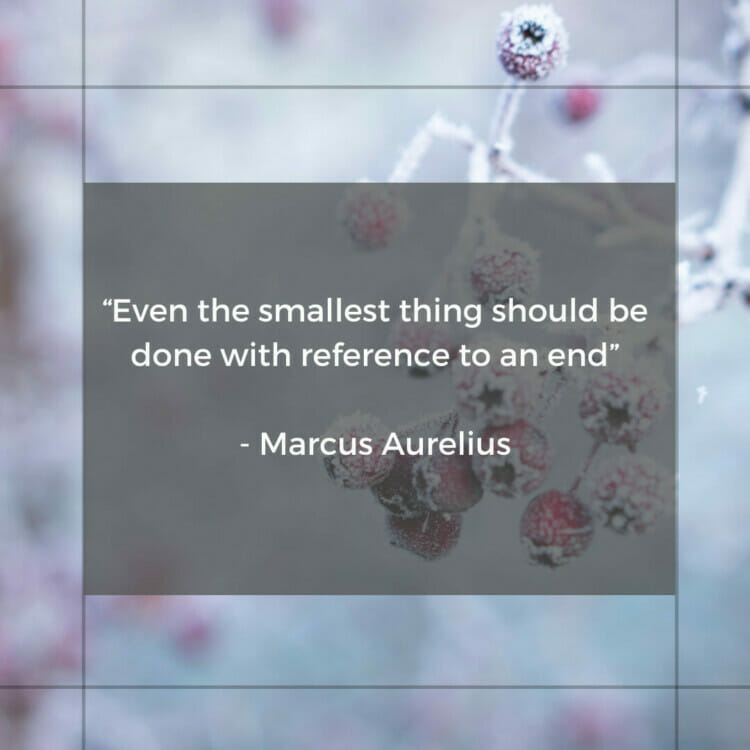 Having a game plan is the best way to ensure your decision-making is as efficient as possible. Running around making choices based on the equivalent of flipping a coin will never yield consistent results. Take the time to understand what the consequences of the decision you’ll make will be. And tie it to the bigger end goal your team or organization has. Once you understand the bigger picture, it’s much easier to work backward to the issue you’re facing at that point, and have a much clearer idea of how to solve it.

7. Marcus Aurelius quote on the importance of building a well-rounded team 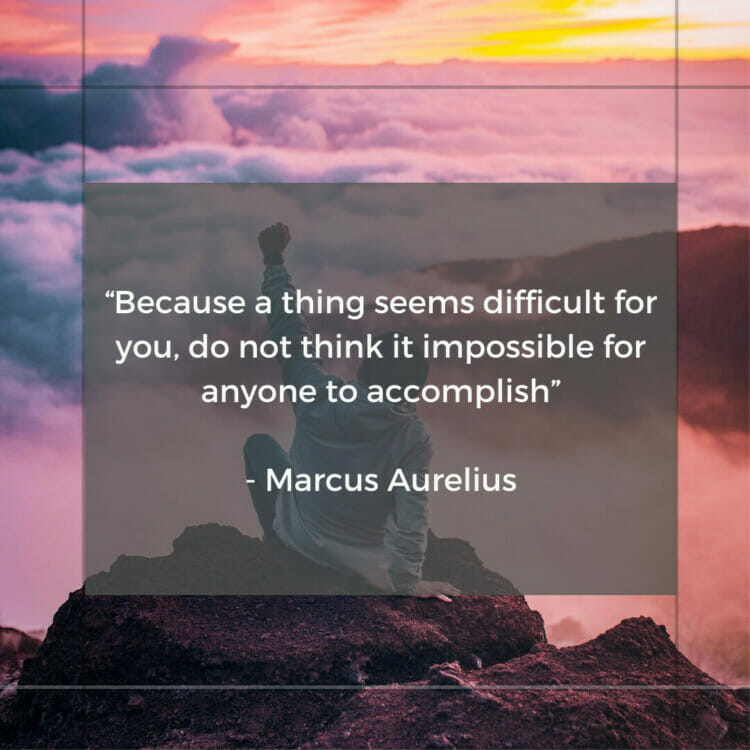 The not-so-secret secret every good leader knows lies in understanding the power of a diverse team. Human beings can’t do it all. A smart manager understands that they will never know everything, but if they surround themselves with people who can cover their gaps they’ll create an iron-clad collective that can face any challenge. Is organization not your strong suit? Find a team member who loves it. Are setting up operating procedures something that keeps you up at night? There’s probably someone who’d done it for years. Identify what you can’t do, and then find someone who can.

8. Marcus Aurelius quote on using your experience and knowledge 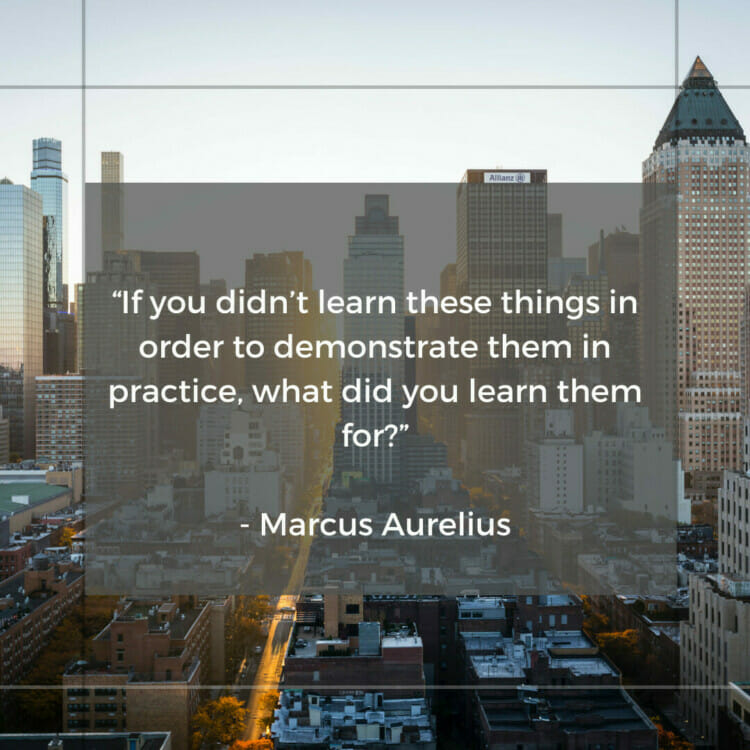 Don’t be afraid to pull from your experience or education. The years you spent building your knowledge base were exactly so you could use them today. Trust that your instincts will guide you in the right direction. This is one of our favourite Marcus Aurelius leadership quotes because we believe in teaching a practical curriculum.

9. Marcus Aurelius quote on learning that, in general, there’s no such thing as unbiased truth 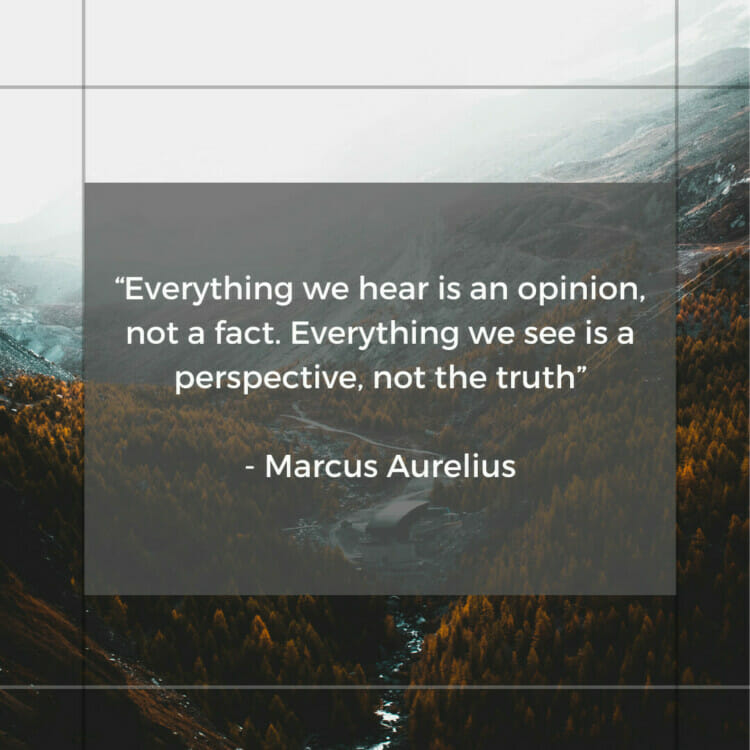 In the world of leadership and business, opinions run rampant. While this isn’t applicable to every aspect of life, in general, there isn’t one universal truth or fact when it comes to working situations. Everyone will have an opinion, a point of view, or their idea of what happened. Understanding that there’s no black or white story will set you up for success when it comes to leading a team.

10. Marcus Aurelius quote on not letting power go to your head 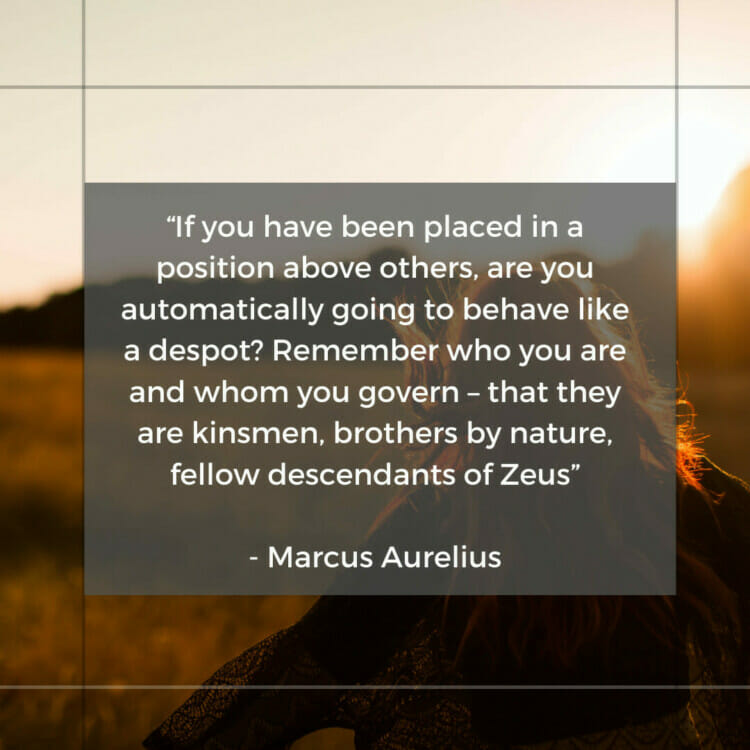 One of the biggest signs of someone who wasn’t actually ready to step into a leadership role is the person who allows their new power to corrupt them. It’s important to remember that not so long ago you were part of the trenches with those you now manage. In order to remain a good leader, be sure to hold yourself to the same standard you expect from your team. Never ask a team member to do something you wouldn’t do, or that you know is wrong. And, always remember to remain a nice person and someone others want to be around.

25 Powerful Leadership Quotes that Will Motivate You